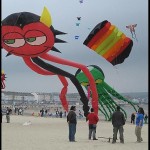 Hugh Blowers summed it up the first day. “There’s all the wind you need”, he said, “if you are brave enough to fly in it!”.

Weymouth is a well-preserved port city on the Southwest Coast of England. A soft sandy beach, perhaps 100 feet deep, runs between the bay and the first row of historic buildings. The wind seldom blows parallel to the sand. Instead it either comes across the water or across the town. And that means your kites either go across the roadway and buildings in smooth winds, or across the water in bumpy ones. This year we got strong and bumpy.

Bumpy, as any serious kiter knows, means unstable. So I saw plenty of kites tumble into the cold water and their owners wade in after them. It was a sort of kite lottery. We put up our best and then waited to see whose number would come up next?

High flying Pilots were the order of the day with 300 feet of line out to find smooth flying. But even then, an inexplicable gust would send sails warping off in another direction, trailing tangles and mayhem behind.

Now I don’t want to make it sound like Weymouth wasn’t fun. It was good fun! Great fun!! And it was a great show too.

Along the edge of the beach, British clubs set up displays and banners. The Brighton Kite Flyers, Avon Kite Fliers, White Horse Kite Flyers , and Great Ouse Kite Flyers (Ouse is a river!) added to the fun.

This year, the tide rolled out a long, long way. That gave us more space for flying and a bit better wind. But it also meant that when kites came down, they were muddy as well as wet.

Organizing responsibilities were handled by Jon and Gill Bloom of the Kite Society of Great Britain. Commentary on all kite activities was presented from the open top of a traditional English double-decker bus next to the field. It was a wonderful event and despite the bumps, we were pleased to be there!

Internet connections and even phone lines at our B&B were non-existent. Between flying and fun, I wandered the streets of Weymouth looking for Wi-Fi Hotspots with my laptop. At times, I felt like a guy with a metal detector, waiting for a beep. But mail continued to come in and go out! 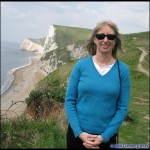 We had one extra day in England and spent it in our rental car, driving on the “wrong” side and struggling to shift gears with the wrong hand. We ate lunch on the grounds of an ancient castle and strolled along the white cliffs. Tuesday we headed for London, Heathrow, and the Friendly Skies home.

Three overseas trips in three weeks is a daunting schedule. But we are back in the office now, catching up on orders and phone calls. The Update is a bit behind schedule and I apologize for that!

We’re still scheduled tight for the next few weeks with trips planned to Albuquerque, Grand Haven, and Wildwood. But they are weekend, not week-long outings. So life will return to semi-normal. See you out there somewhere!