I think that 2003 was the first year my family and I went to the Great Lakes Kite Festival and we have tried to make it back every year since. Now in it’s 17th year, the festival is sponsored by Mackinaw Kites & Toys and is to benefit The Children’s Leukemia Foundation. It takes place the weekend before Memorial Day in Grand Haven State Park, a beautiful beach on Lake Michigan. The actual town of Grand Haven is a nice bonus for those that have family members that aren’t interested in flying on the beach all day. Its shops, cafés and restaurants will keep those family members occupied and if you are lucky, they will stop in the kite store to pick up something for you. 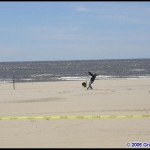 The festival began on Friday afternoon but due to school, work and driving time, we couldn’t get to Grand Haven until early Friday evening. After a nice Italian dinner in town, we headed to the beach to see who was still flying. The sky was clear and there was a nice breeze. A few people were flying stunt kites and a few single line kites up. I thought it was a little cool out but after talking to a few friends that had been there all day, I found out that it was an improvement over earlier. From what I was told, it had been overcast and blowing hard all day. This made me feel a little better about missing the days flying. While I was tempted to go to the indoor demonstration, I was just too beat. So from the beach, we headed to the hotel and bed. 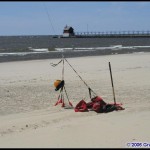 While I fly stunt kites a bit, I am mainly a single line kite builder and flyer. For me, one of the biggest draws of the festival is the chance to fly in steady winds, (when the wind is coming from the lake that is.) Living in the Midwest, (Indianapolis,) I usually fly in gusty, shifting winds. It is a real treat to be able to anchor a kite and have it stay there for hours on end. Saturday morning was no disappointment. After a goods night rest, I was on the beach by 10:00 to stake out some territory. I know from experience that it is best to get to the beach early to get a beach side parking spot. I tend to take lots of stuff and any step saved is appreciated.

The sky was clear, the sun was shining and there was a nice steady 5mph breeze off of the lake from the southwest that gradually built during the day. While it would have been nice to have it a little warmer, I wasn’t going to complain. Except for a group of people participating in what I guess was a metal detector competition, the beach was fairly empty. I picked out my favorite spot and unloaded.

After I got my NPW5 set up for my wife to fly, I got busy setting up my ground bouncers and looked through my stack to pick which kite to put in the sky first. I could see other people down the beach starting to put kites up also. Further north, I could see the Windjammers’ distinctive kites flying on the Demo field. I was busy flying my own kites throughout the day, so I didn’t get the chance to spend much time by the Demo field. Every time I looked up there though, I always saw something happening. I recognized the kites of the Windjammers, Lam Hoac, Lee Sedgewick and Chicago Fire, among others, putting on a non-stop show for the public.

At the far north end of the beach, the big show kites slowly started to fill the sky. I knew that the Gombergs and Al Sparling were here and I recognized Darryl Water’s Gecko and his nicely appliquéd Jordan Airform 100. I could also pick out Jim VanDeVusse’s butterfly appliquéd flowform. I decided my end of the beach needed some presence too, so I put up my red gecko.

Pretty soon I saw my friend Chris Taylor and his girlfriend Rebecca, from Dayton, walking across the beach toward me. Rebecca had brought her mini Double Star along knowing that I wanted to get a close look at it. She put it in the air and it looked great. It spent most of the day tied to the top of my kids’ Teepee. Seeing how well the mini flew, Chris and I decided that it was time to get the full size versions out. He and I had flown our Double Stars together at several festivals but here on the beach we were able to set them up side by side, sit back and enjoy. They happily flew there for most of the afternoon. (Did I mention how much I love flying in the steady wind on the beach here?!) I happily spent the rest of the afternoon watching kids bounce off of my Spikey and deciding which kite from my pile to fly next.

The only competition going on at the festival was among the fighter kite gang. I didn’t get a chance to go down and observe, but from the fighter kite mailing list, I found out that Ken VanDerFolk came out on top of the six flyers in the novice class and Tom Van Bruggen bested the eight other flyers in the experienced group. Each year I bring my fighter kites with the intention of trying my hand at competition but I always seem to get caught up in flying all of my other kites and never seem to make it down to the fighter rings. I’ll keep bringing them and hope to make it down some year. 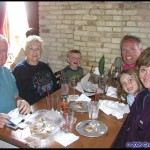 My wife and daughter walked into town and back in the early afternoon and said that the cars were backed up almost to town, waiting to get into the state park. The crowd steadily grew all day long and by the afternoon, it was hard to find an open area of sky to put another kite up in. A steady flow of people were enjoying all of the kites in the air, watching the demos and trying there hand at flying in the manufacturers areas. Everyone was having a wonderful time.

Finally the day was winding down and it was time for the tedious process of bringing everything down and packing it away. (I did all of this while my family was anxiously waiting to go get pizza.) It is at times like this that you stop and think, “Did I remember to put sunscreen on?” Guess which one I am in the picture.

Sunday dawned another bright, sunny day. The only difference was that it was quite a bit cooler. The forecast was for a high of 51F and when we got to the beach at 10:00, it was really blowing. The wind was a steady 17-18mph with gusts to 30mph. I got my Spikey set up while everyone else went to set up their chairs in the lee of the shower house, away from the blowing sand. I looked through my kite bag to find a kite suitable for the strong winds and of course, came up with a power kite. I spent the next forty five minutes flying my wife’s NPW5 and my stack of three Speedwings down the beach. After I had tired myself out, I put up my 50 square foot Pilot, with the intention of trying to fly some line laundry. While I was over getting something else out of my bag, I heard my wife, Lori, yelling at me. I looked up to see my pilot dragging its sand anchor across the beach toward the parking lot. With a little help, I was able to get it back where it had started and decided it might be best to just put it away. My Spikey was happy with kids bouncing off of it and my two, four foot bols were merrily spinning like crazy but I didn’t have any other kites I wanted to risk in the strong 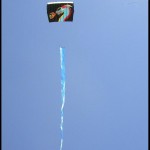 After a while, I packed up all of my stuff and took a last trip down to the demonstration field to see what was going on. Lam Hoac was getting a workout putting on a demonstration for the crowd. He really had to lean back with the winds but he was putting on a great show. The only large kite in the air was Darryl Waters’ Dragon Parafoil. He had it staked out with two deeply buried sand anchors and it looked beautiful flying steadily in the strong wind. I stopped in the kite store tent to get a couple of souvenir t-shirts and to thank Steve Nagen and the Mackinaw Kite Co. group for another great festival. Overall it was a great weekend. My family had a good time and I had a blast flying lots of kites. I look forward to returning to Grand Haven in the fall for the King of the Great Lakes kitesurfing competition the weekend after Labor Day. I can’t wait for another weekend of flying in nice steady winds on the beach.