I just returned from the 18th annual Midwest Area Kitemakers Retreat, (MAKR,) in Oregon, Illinois. This was my third time attending and like my previous two visits, I made or renewed some great friendships, got to spend two and a half days immersed in kites and returned with four great items to add to my kite bag. A bit bleary eyed on the drive home from lack of sleep, (more on that later,) my head was spinning with fresh ideas.

For anyone from the Midwest who would like to try their hand at kite building or learn some new tricks and techniques, MAKR is the place to be. An easy afternoon’s drive from many Midwest cities, (284 miles from my home near Indianapolis,) will put you on the picturesque Lorado Taft Field Campus of Northern Illinois University in Oregon, Illinois, where MAKR is held each year. It is in a lovely wooded section of a state park overlooking the Rock River. Each year, on the second weekend in March, MAKR brings together many talented instructors from the Midwest and beyond. This year, besides the usual Midwest talents, there were instructors from Pennsylvania, Oregon, and even Germany.

While I have not yet had the opportunity to attend any of the other kite making retreats in the country, ( Fort Worden, Oregon Kitemakers Retreat, Maryland Kite Retreat,) those that have say that MAKR is a bit different from the others. The sessions are shorter, (three hour classes,) and there is an effort made to include non-sewing classes. Lack of sewing ability can scare many a new kite builder away and the people in charge of MAKR want to make all kitebuilders welcome.

This year, of the twenty classes offered, 9 were sewn kites, 7 were non-sewn kites and 4 were kite related but not actual kite building classes. The sewn kites ran from a beautiful little pocket sled to an almost 50 sq. ft. Peter Lynn Pilot. The non-sewing kites ran from a nice little snake kite to some amazing miniature kites built in several of the classes. There were also classes on Happi coats, kite memorabilia and Festival Photo Albums. Each year as I see items from the classes I didn’t attend, I always wish there were some way that I could take them all.

Most attendees start arriving Friday afternoon. Once they get settled in their room they head for the dining hall. Here you can set up for display, those creations from the previous year that you are most proud of, (want to show off!) You also get a chance to greet old friends you haven’t seen in a year and hand over items you are donating for the Saturday night auction. Classes start Saturday morning, with two class sessions each day. In between classes you are treated to some great meals in the dining hall where the food is served family style and you are encouraged to sit with new people at each meal This gives you a chance to meet all of your fellow attendees (63 this year).

The first class I was signed up for on Saturday was a heart shaped kite class, taught by Kevin Shannon. I had taken one of Kevin’s classes in previous years and knew he had a lot to teach. In this class he used a heart kite to teach us all how to make a curved perimeter sleeve. I wish I had known what I learned in the class back when I was working on my octopus kite a few years before! By the end of class I had a nice looking heart class that could be flown stable or fighter style, (depending on what type of spine you use,) and I had learned a new technique that I will surely use in the future. 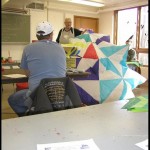 Another class I took was taught by a friend of mine from Kansas, Dave Ellis. Last year at MAKR, I won a nice little piece of line laundry made and donated by Dave. It was a cool little spiked ball that he had designed based on a dog toy. Dave had mentioned that he might be teaching a class this year and I pestered him enough that he finally agreed to teach the “Dog Toy.” He may have regretted it later because each “Dog Toy” kit consisted of twelve star shaped pieces and used four yards of material. Dave ended up cutting over one hundred yards of material to make all of the kits. He was rewarded though, with almost everyone easily finishing their projects in the class. As each person finished their “Dog Toy,” they would go to the front of the room where Dave would give it a test run with his leaf blower. There were lots of smiling faces and Dave’s probably had the biggest.

The one non-sewing class I took was taught by Tom McCune. It was my last class on Sunday and I was nice not to have to worry about getting my sewing machine packed before having to hit the road, (all of the last classes on Sunday were non-sewing classes.) Tom had pre-made Dacron serpent/snake kites for us all. He also had boxes of Crayola fabric crayons. Just color your design, iron and bridle and you have a great little colorful snake kite. Mine wasn’t the most artistic kite but I had fun, worked with some materials that I hadn’t worked with before and learned some new techniques that I can apply in the future.

The highlight of the weekend for many is the auction after Saturday night’s dinner. All of the beautiful kites and kite parafanalia that you have been drooling over since you arrived is auctioned off. These items are generously donated by your fellow attendees, (and even by those that couldn’t attend,) to raise money for MAKR. There are ceramic figurines, antique kite post cards, shirts, string, material and lots of amazing kites and ground displays. The auction is of the “Tickets in a bag” variety, which makes it fun for all since it is luck, rather than deep pockets that determines the winner.

The auction is run by the comedy team of Johnny Roberts and John Karel, who keep the auction moving and the audience in stitches. Half way through the three hour auction, there is usually an intermission activity to give John and Johnny a break. This year, Greg Bethel and I were asked to handle the intermission and while we were a bit nervous, we were happy to help out.

First during the intermission, we had a timed kite building contest. All teams were given a packet of identical material and had 12 minutes to design and construct a kite using only those materials. It was amazing what the teams were able to build in the limited time. The team led by Duane Beard won “most beautiful,” with a train of two square kites that flew great (accompanied by a shower of gold confetti for dramatic effect). The best flying category was a close contest between Dave Butler’s and Nancy Lockwood’s teams, both flying oriental style fighters. Nancy’s team just edged ahead when the Butler team experienced a collision with an obstruction on the flying field, (light fixture.) 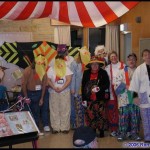 Also as part of the intermission was the “pantaloonies” contest. Quite a variety of get-ups were worn as no one really had a good idea of what pantaloonies really were (which added to the fun). Barb Meyer won best home made pantaloonies for a pair of tyveck pants that she had been passing around all day for everyone to draw their favorite kite on. The Duane Beard/Ben Moran team won best “Looney” theme with their flock of “Panting Loonies” complete with ripstop masks bearing red panting tongues. A region 5 director, who shall remain nameless, received a special “most shocking” award. Doing his part to promote the AKA, he dropped his drawers, showing off his AKA briefs, (if you see him, ask him about his prize.) The overall award winner was Nancy Lockwood in her lovely rose covered ensemble complete with matching hat and oriental fan.

After intermission, John and Johnny got the auction moving once again, culminating in drawing the ticket for the final kite. They had wisely chosen to save a wonderful purple, black and grey Della Porta, with striking “V” graphics for last. This kite had been donated by Mike Gee of Jamestown, ND even though he couldn’t attend this year. Almost everyone had put tickets toward this kite and my intermission partner, Greg Bethel, was the very happy winner. Overall, the auction raised over $3,000 which will be well spent to help keep the cost of next year’s event down and bring in some more talented instructors in future years.

The other sewn kite class I took was the most ambitious. Jerry McGuire was talked into teaching a Peter Lynn “Pilot” kite class. Jerry knew that it was unlikely that anyone would finish the kite in the three hour session. However, he felt that there was enough interest and that he would be able to get everyone far enough along that they should be able to finish on their own, (little did he know.) Jerry spent two hours cutting fourteen yards of ripstop to make the parts for each Pilot kit. That’s two hours and fourteen yards for every kite made! He did a great job of preparing and has us all sewing in no time.

One students in the class, Glorious, had never sewn a kite before and was having all kinds of trouble getting her $18 e-bay sewing machine to work on the ripstop. Barbara Meyer, who is on the MAKR committee, had tried to dissuade her from taking the Pilot class when she registered, but had had no luck. Glorious just plugged away with her troublesome machine and slowly made progress.

After the Saturday night auction and festivities, a bunch of us, including Jerry, returned to the sewing room to work on our Pilots. Ron, one of my fellow forum members at Kitebuilder.com (also a new kite builder and attending MAKR for his first time), had been trying to help Glorious with her machine earlier and finally insisted that she use his. She couldn’t believe the difference the machine made and started to sew like a demon. I will say that through all of this, all we heard out of Glorious’ mouth was pleasure and excitement to be building a kite herself. Not once was she discouraged or angry. Finally at 3:00 AM Sunday morning, Glorious stood there with a finished, (and beautiful,) Pilot kite in her hands. A kite that she had made herself. I am not sure which of us had the bigger smile. Then, Linda Larkey, who was also in the Pilot class, presented Glorious with a bag for her new Pilot, that she had secretly been making. It was a slightly tired but very happy group that got to share in Glorious’ accomplishment that night.

After Saturday night’s activities, Sunday seems a bit subdued, especially since the dining hall is now missing all of the auction items that had been giving the room a festive feel (Plus there were a few of us that were feeling a bit tired.) But there was still lots of kite talk and two more great classes to attend. By the end of the last class on Sunday, I was feeling a bit sad that the weekend was over but I also felt re-charged. I drove home with three great new kites, a nice new piece of line laundry, and a kit for another nice piece of laundry (a workshop I couldn’t attend). My head was full of ideas and my heart warm with all of the sharing and friendship that I had experienced over the weekend. If you are at all interested in making some kites, having some fun and maybe getting a little crazy, make plans to head to MAKR the second weekend of March next year.