2006 marks the 5th year of the Festival of Wind, Waves & Water, held annually in White Rock, BC on the last weekend in April. White Rock, for those who haven’t been up this way before is quite literally the first town you’ll come across when you cross the border at the Peace Arch crossing in Washington State. The event itself combines kite flying and a sailing regatta and its been steadily growing each year. This year, we had numerous American guests up with us and overall, more people than I remember from last year. This is a good sign! You can’t ask for a much more picturesque beach to fly some kites on. This years list of invited flyers included : 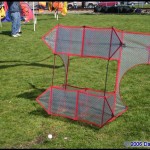 Also up visiting were the Currans and the Buttons from Washington, and Steve Brown, official Northwest Kite Collecting King. Ellen Pardee was invited as well but, she wisely chose to stay in Spokane for the birth of a granddaughter. And of course, most of the BCKA membership made it out as well! The only sad note with the above is that this turned out to be Sam Huston’s last kite festival. He will be very missed by everyone in the Northwest and I hope we made his last festival a great one.

Unfortunately, the weekend started off on a rather wet note. Saturday was an utter washout with heavy rains all day long. I had intended to fly Revs both days of the festival, but, with the deluge that I woke up to, I wisely decided to stay home and attend to my huge backlog of video left over from my recent trip to Berck-Sur-Mer. Those who did brave the elements quickly decided to call it a day and many people collected themselves over at The Percivals for kite videos and stories, in a dry environment and to undoubtedly run some clothes through a dryer.

Sunday morning, I cautiously woke up and checked the skies. My initial plan had been to hit the weekly indoor fly we do out in a small community center and then head out to White Rock for the afternoon, rain or shine. However, one look outside and the decision was made to ditch the indoor fly and head straight out to the beach, it was simply beautiful and sunny out with a little bit of a breeze as well. I jumped into my car and headed straight for the beach, anticipating a long, fun filled day of flying. The festival’s focus is traditionally single line kites, with a healthy fix of some beautiful banners. As I drove up to the beach, I could tell the sky was quickly filling up some great kites, even at 10:30 in the morning. Once I had parked and grabbed the camera and my usual sack full of Revolutions, I walked over to find a nice wind that was somewhere around 6 – 8 mph, and it was one of the warmest afternoons we have had so far this year. Perfect conditions in my book! 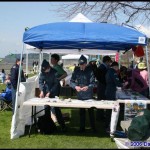 While the focus of the event may be on single lines, there are a few of us who drag out some multiline kites, but we tend to stick to short line sets for these as the sand itself quickly fills up with people, and kids with their newly minted sled kites. The BCKA often runs kite making workshops at festivals and other events around the lower mainland and they always prove to be pretty popular. This year, the local Air Cadets lent a hand, teaching kids how to assemble a simple kite. I spotted Bob Serack ( I knew he was somewhere close by as his beautiful banners were all over the place! ) out on the beach with two of his quad kite stacks so I walked over and picked one up for some flying while Bob and I caught up and he filled me in on what I had not missed the day before with the downpour. After setting up one of my Revolutions, I headed back up to the grassy area to start getting some pictures of the many great kites that were either up the air or spread out on the field. Below you’ll see some of what I managed to capture on the camera.

One of my favorite things to watch at any kite festival is the Rokkaku battles. I almost think these should be MANDATORY events at any festival, simply because the crowds really enjoy them as well. BCKA Rok battles have been going on for years and a well tuned group of competitors hit the field for this particular one, with 3 heats being run with the six kites. But, in the end, there can only be one Rok God and this year (as it has been many years) it was Nigel Spachman who beat out Ron Hardie for second place and Cal Yuen for third. Great job guys, the crowd loved it and I can’t wait for the rematches at the upcoming Pacific Rim Festival, June 10th and 11th at Vanier Park in Vancouver.

A note to people who fly demos, be excruciatingly clear which song you want if your demo CD holds a few options on it. I took advantage of a clear field right after the Rok battle and I tossed Cal my demo CD and said “Well, spybreak would a lot of fun, however the wind just isn’t there for it, so, use track 4”. Of course, by the time he got to the sound tent again, it was “spybreak” from the Matrix Soundtrack that stuck in his head and voila, off I was to do a higher wind demo in nearly no wind at all. Ah well, there are certainly worse fates than having to do a quad demo in the warm sunshine and I managed to get muddle my way it, including a few deft dodges of sled kites that seemed to pop up out of nowhere. 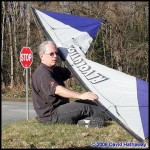 As the afternoon came to a close, people began packing away their many stunning creations, kids rolled up their new sled kites and groups of us headed off to grab a quick bite to eat and reminisce on yet another excellent White Rock Festival drawing to a close. If you get a chance next April, make the trip into Canada for this one, its growing every year and some of the finest single line kites in the Northwest can be found here, often debuting here after a winter spent sewing them together. Great people, a great location and great kites, what more could you ask for?