I flew into Boston International around midnight on Wednesday night where I ran into Darren Weider’s grinning mug. He and brother Scott had offered to put me up at their place before and after the Boston Area SKC (BASKC), eager to hang out and show me a fair amount of New England… Plus, I’d never turn down a chance to hang out with two of my favorite kite people in the country!

Things are tough for sport kite competition in the Northeast right now with less competitors than ever… Working with Greg and Jackie Lamoureux from Seaside Kites, the goal was for me to come out to BASKC and share some of my excitement, put on some demos for the spectators and compete in their Eastern League sanctioned event. As things would turn out however, the weather provided quite a challenge for both organizers and participants… Even as I was checking in for my flight out of Portland, there were flood warnings throughout much of the greater Boston area.

On Thursday, I spent the day flying at Breton Point State Park in Newport, RI- what a beautiful place to grab some wind! Formerly home of the Newport Kite Festival, this field is located right on the Atlantic Ocean and offers up some truly sweet wind directly off the water on most days. At one point however, I was teasing the flagpole with my Sea Devil and managed to get my kite stuck up there with the pole actually through the bridle… *sigh*

After trying to fly it up and off the pole for 20 minutes or so and trying to lift it clear with my Rev for another while, I eventually gave up and had attached a razor blade to the tip of my banner pole so that I could reach the 20+ feet to simply cut the bridle and get my kite down. Just as I was walking over to do this, Scott Weider (master that he is) had managed to snag my kite, working it the 10′ or so up and over the tip of the pole using my Rev I… Unbelieveable, what a surgeon he is!

Friday afternoon found me at Millennium Park in Boston on Friday afternoon where the festival was to be held. Sharing the sky with Darren and two mutual friends from Taiwan (Wen & Litsong), we took advantage of a gap in the weather to put some kites in the air for a little while.

At one point, I was chased off the soccer field where we’d set up… It seems that the local soccer players have issues sharing their space with the kite fliers, so I flew my kite up to the main field, working my way through two parking lots, two chain link fences, a 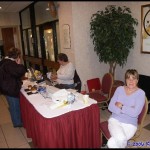 row of bushes and several trees until I was safely on the field where the weekend’s event would actually be held… Have to chuckle, I do like a challenge!

Event organizer and local kite peddler, Greg Lamoureux arrived around that time to scope out the field and touch base with any early arrivals. After saying hello and getting in a solid warm up session, it was off to register back at the host hotel and get rested up for the first day of the event.

Upon awaking, I was chagrined to find a pretty solid downpour chasing away any hope of staying dry on the field… We took off for the park after a quick breakfast buffet at the hotel to find a very soggy field indeed, which eventually drove me to dip out to the local shoe store for some waterproof footwear.

Joining the other hard core fliers (Dave Smith, Doug Coates, Dennis Smith, Rosanna Rosanova and others), we made the best of it and threw our kites into the sky for a couple of hours until the day was finally called on account of rain… Too bad, such a long way to come for a one day festival.

On the up side, fliers met back at the host hotel for a great auction held by Seaside Kites and one of Dennis Smith’s well known ice cream socials. There were a lot of cool items, and better yet, a whole bunch of great deals on some great kites.

With the weather abating somewhat on Sunday morning, fliers gathered back at the field to make the best of it and run the whole competition in the one day we had left… Not surprisingly, everyone worked together and managed to get it all done on time.

With more than occasional moments of sunshine, spectators gradually started trickling into the park with kites, and those that came unprepared were met by the folks at Seaside Kites who had a good variety of kites available for anyone who had an interest. Families peppered the skies with small single lines, “Photo” Joe Perron showed off his multiple kite flying for a spell, and fliers jumped in to do demonstrations in between competition disciplines while Dennis “Voice of the Eastern League” Smith handled announcing duties.

A personal highlight for me was watching the masters pairs team Full Throttle (Graziano/Tinkham) flying an excellent routine set to a mixed soundtrack from the hit movie Cars in some pretty hefty winds… At a couple of points, their kites were ripping through the sky so fast and loud that the crowd actually backed up a bit! Two of the finest fliers in the country, Ron and Shawn put on one heck of a performance.

After tearing down the field and packing away the sound equipment, fliers gathered around the Seaside Kites tent for their awards ceremony where winners from the various disciplines were given trophies in the form of authentic Boston bean pots mounted on wood plaques… When in Boston, well, you know.

With my return flight scheduled for Tuesday, I spent Monday back at Breton Point State Park in Newport for some more air time (carefully avoiding the flagpole)… Scott couldn’t join us due to work duties, but Darren, Litsong, Wen and I had a most excellent time and enjoyed what were undoubtedly the best winds we’d had all week. Finishing off the evening, we shared a wonderful New England seafood dinner and a scenic tour around some of Rhode Island’s coastline.

Despite the challenges, I greatly enjoyed my first visit back to the Boston area since 1992 when I was flying in Experienced Class with Dodd Gross… My thanks to Darren and Scott for putting up with me for part of the time, and to the BASKC organizers Greg and Jackie who went out of their way to make this old west coast flier feel quite at home.