Susie and I are used to driving to the airport on kite weekends. So it is something special when we can pile gear in the car and go straight to the field. And when that field is close enough to home that we can sleep in our own bed, it is extraspecial!

Lincoln City kite festivals were faltering when new leadership at the city Visitor Bureau stepped in and turned them around about five years ago.. The beach isn’t any bigger than it ever was, but hospitality, sponsorship, funding for necessary amenities, and crisp organization have made all the difference. Now they have hotel rooms for featured fliers, an advertising budget, and no problems with parking space. 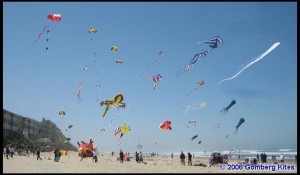 We headed for the D River Wayside Park early Saturday unsure of what to expect. All week, the skies had been clear but the winds had been a bit strong. At noon, they were on the high side of perfect – about 12 mph. But by early afternoon, they increased to 20 at ground level and we found ourselves on the lower end of difficult flying conditions. Most of the big kites were down by 2 p.m.

That was a shame because, despite the crowded flying space, there was quite a show in the sky.

Crowds that any festival might envy remained on the beach even in the higher winds. Sport kiters strapped on vented sails and continued with the show. And in between, we recruited volunteers for high-wind bol racing.

“Running the Bols” involves pulling matched sets of 10 foot spinning baskets (bols) upwind. When breezes are stronger, we simply add more runners. As you can see, teams of four or five were not unusual. The faster you run, the harder the basket pulls. The object is to engage – and then wear out – your audience. Worked pretty well too! We wore out about 200 runners each day. All of them left with big smiles…

A special guest at the Wayside this year was Al Sparling of Chicago. Al brought out his giant Gecko and a few other show pieces while conditions safely allowed. Al is one of our sponsored fliers. Check with him next time you’re on the same field. He has some display samples of our newer kites in his bag and is authorized to sell them at “field prices” when festivals allow such transactions.

Susie and I are home for the holiday weekend but have a busy July and August planned. We’ll be in California, Southern Oregon, Delaware, Washington, and New York over the next eight weeks.