?And never the two will meet”?

There are many, very different kite festivals around the world; it may be nice to compare two of them, even though both are in the east. Well, sort of! Oostende means ?East end”, but I had to go west to get there, Guiyang is in the Far East, China where I met some people from the USA who had to go west too; it’s all relative.

I attended both kite festivals for different reasons, in Guiyang I was invited to judge international and national competitions, in Oostende I was part of a Dutch kite team, and I actually flew kites there…
Especially for foreigners, the Guiyang festival is a very official affair, with kite flying as a seemingly small part of the program. Oostende is an -old- kite festival where the few officials play a very small role.

Of course kite flyers are just as important on both occasions. In Guiyang, for the Chinese national championships ?serious” may not say enough, in Oostende ?serious fun” may describe it better!

I arrived at Guiyang airport from Qingdoa late at night. After some more guests arrived we were all taken to Baiyun city, the place for the 9th (bi-annual) international kite festival.

GuiYang is an industrial city in the GuiZhou province,in the middle of China (106 east, 26 north). About 30 km to the north lies BaiYun, a relatively small town, with big plans; it will grow about tenfold in the next ten years or so. Part of the expansion already build is the large four star hotel, and even bigger conference center, where all competitors would be staying, unfortunately quite a long way from any town center. We arrived there after a trip of more than an hour and after a quick look at some lists keys were distributed and we could catch some sleep.
The next day we were woken, at the usual early hour in China, by our aids/translators. After breakfast there wasn’t much to do yet, and a quick tour around the hotel complex left more than enough time to unpack, prepare kites and hang around, all with the help of the volunteers of course. It gave me the opportunity to meet with the Chinese judges, some of which I met the year before in Weifang.

We used the next day to have a look around Baiyun and Guiyang. Taxis are not expensive at all so going out sightseeing that way is easy. Explaining were you wanted to go a challenge!

In the evening, after diner, the festival started officially in the Baiyun stadium. Both the Chinese competitors as well as the international guests entering carrying their flags, followed by a big show, broadcasted on provincial television. More than two hours song and dance in modern and traditional style, lightshows and lots of smoke, all ending, of course, in great fireworks. 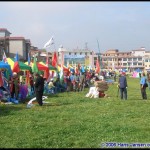 On the first festival day we were taken to the flying field and it was a surprise to see the field surrounded by buildings, that were not yet there two years ago! Half the field was reserved for the international guests, each country having a booth with national flag (see inset picture). Kite flyers from all over the world were invited, accompanied by a group of foreign students, all studying Chinese in Beijing.

On the other half of the field, amongst many visitors, the Chinese national competition started with ?the longest kite” resulting -as we heard during the prize giving ceremony- in a new record of a kite-train of 2800 m, but also in a serious knot of three other kite-trains! Unfortunately the wind died down almost completely later that day, so running became an important part of other competitions.

The organisers came up with a mixed-culture competition: all guests were asked to fly Chinese traditional kites (of which about a hundred identical ones were available) ! Contrary to what most expected, quite some expertise was needed to get these kites flying!

The lack of wind later gave us the opportunity to admire all the different kites up close and have a relaxed chat with new and old friends. The tens of thousands of visitors walked along the edges of the field, bought some food at the many -very small- stalls or negociated a good price for one of the many kites on sale. 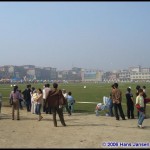 The second day was reserved for the Chinese national championships. The field was meticulously prepared , the booths were taken by a few hundred competitors from all over China, about fifty judges got their own tents on the field and to get ?in the mood” a group of cheerleaders were working hard. 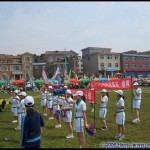 But almost without wind this day was not a real flying day either. For the ?best kite performance” kites were launched far over the lines to allow for a long run-and-fly. Later that day the six sport kite teams unfortunately waited in vain for some wind. Again this gave the opportunity to have a close look at all the traditional and non-traditional Chinese kites. 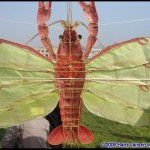 As absolute best, for me, a lobster (see inset pic) with more moving parts than a watch, probably just as accurate, all made from bamboo! Claws, legs, wings, everything could move, would move in the right wind…Almost a years work, and it was just hanging there. The big ?Kite fair” nearby was worth a visit too, especially the non-kite related items, making finding souvenirs -important at the end of a trip- a lot easier.

The organisers invited us the next day for a visit to a nearby Miao-village. The Miao are a people recognised by the Chinese government as ?official minority” and so supported in maintaining there own culture (language, art, customs etc.) A very interesting, and also souvenir rich, visit! Later we (the international guests) were taken to a park were we planted trees, a tradition for this festival; some of us checked how well their trees, planted two years ago were doing. 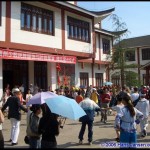 Around Guiyang more than ten ?minority” people are living and on the last evening, a performance of their traditional songs and dances was held in the big theatre in Guiyang. Preceded by the award ceremony, this performance was a well chosen closing of a well organised, interesting festival. Worth going next time, in two years, with a bit more wind (and a bit less ?hurry up and wait” or bus rides..)!

And then just two weeks later ?Happy rotor hour”! No, it wasn’t a helicopter demonstration but one of the -returning- highlights of the Oostende kite festival! A demonstration field full of rotors, up to 10 m in diameter, an hour long on display. The 21st edition of this festival was, just as all previous ones family-day-of oriented. It is held on Saturday and Sunday on the beaches of the city of Oostende, Belgium. The beach is not as wide as some of the beaches in the north of France, like Berck, (but a lot wider than in the time Flashback fought both waves and wind)

Along the more than one and a half kilometer of beach there is plenty of space to fill with kites, and the walkway or boulevard right alongside is the perfect place for all spectators.

Despite the weather forecast (cold, rain, windy) more than 50000 people came to have a look on saturday, to find out weather was sunny, dry and with just the right wind. Even more showed up on Sunday, although the weather was not as good as the day before.

The sky was filled of course, as it should be on such a festival. Big and soft like parafoils and Nasa-wings, an almost complete zoo and a dog, top and bottom half-people, divers and mermaids, everything was there, maybe a bit ?standard” for many kiters, as ever surprising to the public. In between of course the less spectacular ones, like marconi’s, a Brogden, Conyne and bigger and smaller box kites. Some graphically well designed Genki’s too. Flyers from Belgium, the Netherlands, Germany, France, England and even Shanghai made sure the public had something to watch!

While many participants showed their creations along the beach, the demonstration area in the middle was the place for a whole program of kite-activities.
Of course the rokkaku fights, held in real competitive spirit, in six heats on two days, resulting in a final fight on Sunday. With tangled lines, pulling and running the last three competitors showed this kind of ?kiteflying” is a real sport, that needs stamina, if not a very healthy lifestyle.

Candy droppings brought many children in the arena of course. A large delta and a clever pulley system delivered five bags of sweets, enough to make -almost- everybody happy. From greater distance the rotors provided a very colorful view for all spectators on the boulevard. For an hour at a time these giant soft machines showed a different but equally spectacular way of playing with the wind.
Main attraction in the arena were the demonstrations of the two and four line kites. Flying Squad from the UK, Team4fun and the French Flics showed separate as well as togther (with 14 kites) their amazing abilities, both in handling the kites, as well as flying as a real team of 14!

Of course people stopped and watched the many ballets that were shown. The Flying squad with two line and four line kites, as ever astonishing, and Stephen Versteegh, from the Dutch Stack team flew his competition ballet several times. Not that noticeable from the boulevard, but very present on the beach, with less years than lines: Daniel Hoath, flying his quad with the same moves and tenacity as his dad.. Not only a large part of the beach was ?kite territory”. On the boulevard exhibition tents, showing kite photography, Chinese kites (and other objects), brought in by Yao Yuanlong from Shanghai, the mini kites exhibition from Ralph Dietrich and Otto Vossen’s ?Art to remember” kites.

A family orientated -and family organized- festival, Oostende is one of the oldest still existing European kiting weekends. On a nice beach , in a relaxed family ambiance, and good Belgium beer within reach and so a lot of kite flyers from around Europe, it is a festival worth visiting. And the well organized bbq party on the Saturday evening gave every opportunity to meet the people that were ?tied down” too far away during the day!

Lots of officials and busses at one festival, -almost- organised to the minute; just a beach with lots of kites at the other, a big contrast. But both with competitions, a great variety of kites, many people watching, many serious kite flyers from around the globe having serious fun. It is clear east and west meet at the end of a kite line.