Over the years I’ve been flying, I’ve maintained a mental list of some of the larger, long running kite festivals I have wanted to go to eventually.

The Berkeley Kite Festival, held every year on the last weekend of July at Cesar E. Chavez Park, has long been high up on my list. While I was at the Berck Festival (see REVisions in Issue 48), the Erzins and John managed to convince me that it was time to take Berkeley off the list and come down. As it worked out, I’d also gotten a brand new, jet black Mustang GT just before the trip, and this seemed like an excellent excuse for a road trip with John. 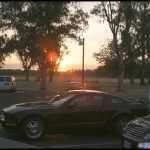 I headed down to Portland on the thursday before to collect John and at about dark ‘o’ clock (4am in the PSDT timezone) on Friday, we packed up and zoomed off down to California (of course, obeying the speed limit the entire way ;-). We had a breakfast stop in Grant’s Pass where we added JD Fabich to the convoy, and back on the road we went. Overall I’d guess it was about a 10 hour trip’s worth of driving from Portland and by 4pm, we were standing in the park to have a quick afternoon fly. While much of the trip was really hot, especially between the Oregon border and Fresno, as soon as we got into Berkeley, we were surrounded by a really nicely cool day. We met up with Darrin Skinner and a few others (including a friend of mine from England who had recently moved over to the area, hi Leigh!) and got our flying fix taken care of before heading over to the Erzins to settle in for the weekend.

Upon waking up on Saturday morning, we were pleased to see it was going to be a nice sunny day, with a reasonable amount of wind.

Ostensibly, one of the main reasons we were headed down was to compete in the final event of the season, the West Coast Kite Championships, put on by annually by the Bay Area Sport Kite League, however there was far more than just that happening at Berkeley that weekend. Ray Bethell was in attendance once again, delighting huge crowds gathered behind him while he wove his three Kestrels through the air all day long, both days. Highline Kites, the presenter of the event had a large tent area setup, selling all manner of kites to the general public, and if people wanted to, they could stop by either Revolution or Prism’s flying areas to get 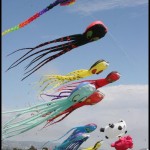 some lessons or tips on their respective kites (a special nod to Ben from Revolution who endured at least 4 cut line sets from the hordes of handmade single line kites that were made by kids, floating across the training fields sporadically)… While the BKF is on the whole a very worthwhile event, the uncontrolled melee of kids kites and lines seemed to be the only drawback.

Another long time favorite at this festival is The Berkeley Kite Wranglers, notorious for their large collection of Peter Lynn Octopus kite displays. This year, they managed to achieve a North American record for the most kites in an Octopile, topping out at 10 large Octopi, plus a couple of Rays, a diver and a catfish or two. Watching these kites weave and bob in place, with their long octotails swimming in the breeze is truly a sight you need to see in person some day. It’d seem they advance the number by at least 1 new 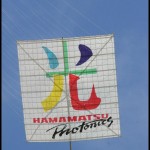 kite per year so, with a little luck, next year’s 22nd anniversary of the festival will see 11 or more large Octopi gliding gently in the breeze, and a catfish or three.

For International guests (i.e., besides the Canadians, myself and Ray ;-), the festival had brought in the Sode-cho Kite-Flying Society of Hamamatsu, Japan. They came well armed with magnificent huge Edo kites, banners and a small army of people to put on large demonstrations each afternoon which also featured local Taiko drummers winding their way around the demo field. They were a great addition to the festival, providing great entertainment all weekend long, and happily fielding questions from onlookers, whether it was about their kites or the members of the society.

Another huge hit in the main demo field were the candy drops, where huge hordes of short people in staged groups would tear across the field in search of candy dropped from a large kite above. This was easily one of the largest candy drops I’ve ever witnessed, I wisely stayed a good, safe distance away in order to avoid death by trampling. That being said, the kids were pretty well behaved about it.

I’d even suggest the same was true for the huge Rokkaku battles, organized and staged by Arnold Stellema and a group of helpers, who on top of shepherding the 35 + people who flew in each of these battles, also made all the kites, supplied all the line, handed out gloves for everyone and guided us all through numerous heats over the two days. 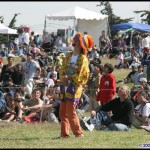 Oddly, for reasons unknown to this author, the AKA’s soon to be retired President, David Gomberg was often a muchly desired target any time he was in battle. Personally, I’m convinced its due to his fearsome reputation as a Rok battler, thus earning high brownie points for whoever could take him down. Unfortunately, it was not me who did either time, however I will say Arnold himself scored a fantastic victory in at least one of the battles.

As mentioned earlier in this article, this festival is also home to the West Coast Kite Championships. Throughout both days, dual and multiline competitors worked through both precision and ballet events, while in the lower field, fighter kites went through their events.

Also, on the upper field, home made kites were exhibited and judged. This represents a pretty good cross section of the kiting community, all competing at one festival, something which would be good to see at more of the larger festivals. I saw some truly beautiful kites and some really excellent flying by all competitors, and for myself, it was novel to compete against a few people I had never flown against
before. 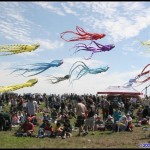 Lastly, also in competition as a non-AKA event (for now), we saw the return of Multiline pairs, a discipline John and I have been competing with in the NWSKL for the last several months. I’d especially like to thank the BASKL for taking a chance with this event and it was a lot of fun to fly, myself and John as Felonious Monk (me being the monk-ey…) and Aaron Champie with either Ron Despojado or Uly Villanueva as his partner, calling themselves Eeks and Squeaks. Hopefully we can see this event continue to grow over the next couple of years, the crowds seemed to enjoy it.

And before you knew it, the day was over. I remember asking someone the time at what I thought was 2:00, only to find that we’d already
gotten to 4:30, so we all packed ourselves up, cleaned ourselves up a bit and went off to various places for dinner and drinks. John, and I found ourselves at The Doubletree Inn for an evening of conversation with Ben and Lolly from Revolution, Dan Whitney and Darrin Skinner who had wandered over from another table of flyers on the other side of the restaurant. The talk flowed for hours and eventually we ended back up back at the Erzins, exhausted from what had been a long, fun filled day. Tracy had made John a really delicious Tiramasu (one of his favorites) and last I checked before wandering off to sleep, John’s head was in the bowl, making short work of it all.

I’d be hard pressed to say which of the two days had better weather as both Saturday and Sunday were warm, beautifully sunny days, with just enough wind to make flying easy, but I’d give the nod to Sunday for having a little more wind. Again, the day was filled with Roks, Kestrels, Octopi, Manta Rays, kids, and sport kite competition.

We’d also managed to organize a Rev mega fly, which saw 6 of us head off into the demo field for a little off-the-cuff team flying at one point. Ok, well, it wasn’t that “mega”, but, it was a lot of fun regardless. We also watched as the Bay Area’s own Airzone team flew demos and competed, looking like they will make a return to the World Championships again in the new year. Saturday I had managed to completely forget about eating lunch, and given the vast array of food that rings the upper field, I vowed I’d tour through and try some things on Sunday. And I’m glad I did as well, there was a great selection of food to be had at reasonable prices, provided you could wait through the throngs of people.

And much like Saturday, Sunday disappeared for me as well, suddenly it was late afternoon which meant one thing, the dinner cruise / awards / party / silent auction cruise around the bay! You couldn’t ask for a nicer, relaxing way to end a long, busy weekend of kite festival and there was a pretty good selection of goodies up for auction. While I didn’t get a large monkey-dragon kite that I had my eye on, I did manage to walk away with a great Ray Bethell-made kite stake. If you’d like to look at the results for the West Coast Kite Championships, I have a link to the final results below:

Unfortunately, the sole thing remaining to do for this festival was a 16 hour drive back home (which was followed immediately the very next day by a work flight to Los Angeles!) to drop off John and get back into Canada but, I’d like to take this chance to thank the organizers of this event and the BASKL people for the great competition. Now that I’ve been once and crossed it off my list of

festivals to see some day, I’ll have to move it onto the “festivals I have to go back to again next year” list. And if you have ever wanted to go, I’m happy to announce that its well worth the trip, even a 16 hour drive’s worth.

Good winds to you, wherever you are,