This time, BaToCo members were invited to participate in the show join efforts to support the children education campaign, which purpose was not only to help people avoid taking drugs and smoke, but also Aids prevention.

The leader of the campaign is Dr. Rubén Sosa, who he is been trying, since 1995, to made on same assets place to live. The kites are his main instrument to make this dreams come true and the BaToQueros, with their strength and energy were there.
A huge number of spectators were present, more than 6.500 at Luna Park Stadium, mostly children from different schools of our Country.

The schedule activities were:

The organizers gave us the welcome to a breakfast time shared with Pomp and Ceremony Alto Peru regiment.

At 9 the children begun to arrived from different places to The Luna Park Stadium. Teachers and members of Asociacion Cerealista de Buenos Aires helped children to take place, giving them a bag of candies, toys and biscuits.

What is Luna Park Stadium?

The Luna Park is the main stadium of our country. Is located downtown and it is known as “The Sports Palace”, colloquially “The Luna”.

It was built in 1934 and it has a capacity of 8000 seats. It is local relevance for hosting sporting and cultural events, mainly boxing and music concerts. It has hosted countless international famous personalities, like Pope John Paul II. Frank Sinatra, Luciano Pavarotti, Deep Purple, Lalo Schifrin, Julio Bocca, Carlos Monzón, Guillermo Vilas, Jimmy Connors, also the Harlem Globetrotters, Holiday on Ice and so on.

The “Luna” its part of our cultural heritage, so BaToCo members are very proud, because we had the chance to fly an Indoor demonstration there, for the first time ever in Argentina.

The “Granaderos a Caballo Gral. San Martín” regiment is the presidential guard. It was founded by General José de San Martin in the 18th century. The General is known in Argentina, as “Fatherland”, because he and his regiment fought for our freedom.

Pomp and Ceremony Alto Peru was founded in 1826 belongs to this regiment. These soldiers are Presidential guard, and it’s 33 musicians are disseminating our military music to the world. That is why they participate in some international Military Music Festivals.

Pomp and Ceremony Alto Peru is knowing as “Fanfare Alto Perú” because the members play music riding their horses. During the show they played our National anthem and others songs from their repertoire. After that, the soldiers come down to greet the children. Please see the photos about it and take special note of their faces.

Pro Música Rosario Grup – Show “Musicalis”:
In advance to discribe what happened in Education Commintment and Indoor demonstration, I would like to write some words about this group and his show.

The musicians live in Rosario – Santa Fe Province – located 300 km from Buenos Aires DC. They traveled from there to show us their show that involves songs played by wind and srtring native instruments from different countries. It was an educational show, because the people could interact with the musicians, singing the songs with them. Also the group work with big screen, sailor character and balloon drops. It was the funniest show.

Our friend Dr. Rubén Sosa is a charismatic guy. He always says: “I am an utopian guy”, “¡My feet are on land but my eyes look at the sky!”

I think that he is a “good person” who works very hard to help children avoid drugs or smoke.

Rubén explained and gave the children a piece of advice about AIDs prevention, drugs and cigarettes consumption. After that he took this commitment: “Children”, he said – “Promise me and promise you that you will never take drugs or smoke to avoid being bad your body”! If somebody offer us, we will say NO.

It was very exciting to hear more than 6,500 souls singing at the same time: NO to drugs or smoke and YES to life.

However, Rubén thought that the best way to reinforce the commitment, would be The Kites. 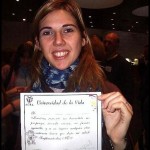 The kites as an image to keep in their minds forever. Think that when the children watch a kite in the sky flying they will always remember the commitment: NO to drugs or smoke and YES to life!

It is difficult to express what I felt this day, sharing such emotions with friends and family. However, I begin by telling you that when we enter into the Stadium, a deeper feeling came over us as we realized we were in such an important place.

Imagine, for the first time the BaToQueros were the center of attention in the “Luna”. At that time, Rubén begun to introduce the BaToCo group and our purpose: reinforce Rubeńs message as a kite funs. In that moment my legs shook like a jelly, and my heart begun to beat very fast.

Handcrafted kites, stunt and Revolution Indoor, decorating the Lunás stage. We know that kites are making history in our Country. 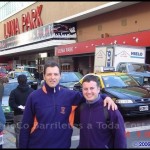 Gabriel Acosta and myself had the responsibility to do the Indoor demonstration, that was why we prepared some routines including our popular song “Tren del Cielo” (Sky Traing – song by Soledad Pastorutti, a famous Argentinian singer).

Gabriel flew his own design stunt indoor kite and I my Revolution Indoor, but not in the Lunás stage as were planned because something unexpected happened with the sound of the next “Musicalis” show.

So, the organizer told us that we had to fly our kites through the corridors, between the seats which were narrow and uncomfortable for our work.. We felt very worried and a little disappointed but we had no choice and had to join both routines in that place…So, Ruben presented our performance to the audience. Gabriel did his job though the right corridor and I by the left. I could hear the whispers from the audience saying:

Fly kites without wind? In this place?…. Impossible!…. Amazing!… Incredible!… I can not believe it!

Believe it or not, the music exploded and our kites begun to fly, people clapped and started expresing their excitement. The crowd begun to repeat the lyrics and follow the rhythm. We could feel the 6,500 throats, the 13,000 palms and 13,000 eyes following the movements of our kites.

Oh! I’ve forgotten to say that Murphy’s laws were not absent, because we had to deal with people and photographers crossing everywhere, children’s hands trying to catch the kites, the three great screens setting in the middle of the area showing our performance and the responsibility for flying above children heads.

My friends, I can assume that we lost weight in that incredible four minutes.

Thanks to God everything was marvelous and the audience clapped warmly at the end of the demonstration. In fact, our desire is that all of them, specially the kids could remember that day forever… 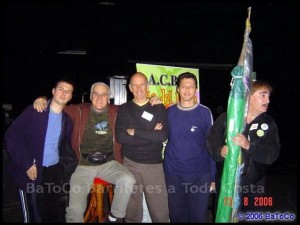 Thanks Kitelife for the opportunity to publish my article.

To all my friends from USA, Spain and Argentina, who helped me to learn and improve my kites flying techniques.