As we travel our exciting planet, Susan and I observe that kiting “success” is relative. And nowhere is this better illustrated than our experience of the past few days. We went directly from the huge international festival in Dieppe France, to a dusty fly in the Kayleshia Township of South Africa. These two gatherings could not have been more different. And yet the smiles on the faces of the participants could not have been more alike.

The flight from Paris to Cape Town was tedious. But we were excited to be meeting our tour group that were landing the same day from different parts of the globe. We came from Europe, Some flew direct from the States. We had a pair from New Zealand. And we had eight from Japan. Together, 20 of us we planned 11 days exploring and flying in this remarkable and beautiful country.

The first of two formal flying stops was Peace Park in Kayleshia just outside of Cape Town. The area includes a vast community of structures pieced together from scraps of wood, coregated metal, cardboard and tarps. Power poles drop cables into the structures like kiteline piled on a stick.

Our kite hosts in South Africa are Cape Mental Health (CMH). They have a facility in the township to support children with severe defects or those needing special care while their parents work during the day. And when a group of international kiters arrives, it becomes a very special occasion.

The biggest hit in the park had to be the Giant Spikey Bouncer. Hundreds of kids swirled around the inflated ball, pushing, shouting and laughing. Then they began to grab the points, twist them for a better grip, and pull in different directions. We don’t stress-test these products. We just turn them over to the young mob. In the end, the kids won and a seam started to give way. We tucked the Ball away and arranged to borrow a sewing machine.

After a few days sightseeing on Table Mountain, exploring the gardens of Kirstenbosch, climbing Cape Point, visiting the wine county, and shopping like madmen, we headed for the festival in the coastal community of Muizenberg.

“CMH” argues that kiting lifts the spirit and brightens ones outlook. So they have worked to organize an international festival each year as part of their overall mental health message.

I’ve reported before that CMH offers the best kid’s kite program I’ve seen anywhere on my travels. A month before, they send kite skins to local schools and invite classes to decorate them based on a general theme. Then on ‘kite day’, the classes bring the sails to the festival where they are assembled by volunteers into arches. Kites are judged and awards given to the winning schools. Then the arches — 50 to 70 of them, head for the field. Instead of 500 kids running in 500 directions with line and battered kites dragging behind, you get an organized and succesful group fly.

Saturday as the teams marched out, there was hardly a breadth of wind. But as they stretched out the lines, the breezes came up and all the kites lofted. You could feel (and hear) the excitement and joy on the wind.

As it turns out, the official invited guests for Cape Town 2006 had to cancel at the last minute. Fortunately, we had 19 great kiters from around the world on our bus to fill the gap. A double set of boundary lines protected our flying area from most spectators. We launched art kites, inflatables, and a fine set of rokkakus into the gusty winds. And in the end, it was as good a festival as any CMH had ever offered.

At the beginning of this article, I suggested that kite festival “success” is relative. So while Cape Town may not be the biggest event we have ever attended, it was the biggest ever held here. And judging by the faces of the kids spread across the field, it was the best time they had ever had.

By any standard, that’s an absolute success. 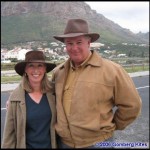 Early Monday we left Muizenberg and boarded a flight to nearby Port Elizabeth. We left most kites behind to minimize baggage charges.

The kiters were going on Safari!!

Check the Weekly Update on our web site in a few days for more news from South Africa.