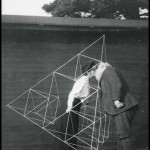 The following story tells of an interesting experiment with kites performed by Dr. Alexander Graham Bell well before his experiments with tetrahedrons and pursuit of flight. It also brings us to an interesting holding in the Drachen Foundation’s archives, and to the continuing relationship between the Foundation and Canada’s Alexander Graham Bell National Historic site.

Bell and his wife had visited Sable Island, Nova Scotia, in July of 1898 to search for evidence of friends lost in the La Bourgogne ship disaster, which had occurred off the coast of Sable Island in June of 1898. The Bell party was given a full tour of Sable and while at dinner, party conversation turned to two-way communication with the mainland. Bell was amused and fascinated when Mr. Bouteillier, superintendent of Sable, described a “pigeon patrol” experiment attempted in 1893.

Thinking the island would be a perfect testing ground for carrier pigeons, a number were taken out to sea and released. None arrived back at Sable; seventeen died, and fifty-five were lost. In a subsequent test, two dozen birds were released and many became confused with the high crosswinds, while others were lost to hawks. 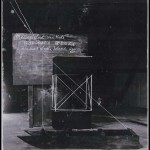 These pigeon patrol discussions turned to the science of flight and kites, and Bouteillier was very interested in Bell’s theories. As was often the case, Bell’s enthusiasm was contagious, and the following two days were filled with discussion of “the feasibility of transmitting messages by water by means of a kite or balloon attached to a float on which the message is placed.” The group constructed a Blue Hill Kite and tested it on the water. In a letter, left with Supt. Bouteillier (as was the custom of the day), Bell said,

I have been much interested in your plan for communicating with the mainland by means of a kite towing a float carrying a bottle or sealed case with dispatches (sic). The plan is certainly practicable and I wish you every success … a few hours would suffice to bring the apparatus to the shore with the wind in the right direction 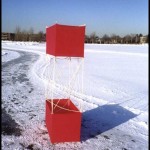 and even if it failed to land it would most certainly be picked up at sea, for a kite in the air would be a most conspicuous object attracting attention even at a distance of many miles.

Several years ago, a Canadian production company approached Montreal artist Robert Trépanier to build a replica of the Sable Island kite. Robert having shown the replica to Ali Fujino, she asked whether he could do a second replica, as the kite was a wonderful piece of craftsmanship and instrumental in telling the story of Bell’s interest in kites. Since the Drachen Foundation did not have the funds to commission the kite, I did not hesitate to commission it and put it on indefinite loan to the Foundation. Additionally, the DF Archive holds Robert’s notes and sketches in preparation for his work with this kite.

Not only is the kite a physical link to the legacy of Alexander Graham Bell, it is also a reminder of the Foundation’s relationship with Baddeck, Nova Scotia’s Alexander Graham Bell National Historic Site. Through this relationship, the DF Archive holds copies of many of the Bell notebooks, and kite scholars can actually see and touch original tetrahedral cells, kindly given to our study center.

The DF Archive also holds all of the National Geographic articles written by Bell as well as copies of a number of photos and Journal entries from the Library of Congress.