It started as a simple idea this spring. John and I, with the ever growing iQuad, would simply pitch up on the WSIKF beach, setup camp, and fly team revs all week long, with as many people as we could possibly get involved. What we ended up with far exceeded what we had hoped to accomplish on nearly every level. 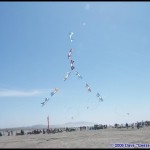 The day before the start of WSIKF found me on BC’s Sunshine Coast, doing a show with one of my bands, having sprinted off from Ocean Shore’s Summer heat event at the crack of dawn in order to make the drive. And it found John still at Ocean Shores, competing on Hot Tricks. But, our plan was to convene Monday morning and get rolling on what turned into one of the largest Rev parties North America has seen. Monday, we started with a small group of us, as I rolled down onto the beach (in the space of just over 24 hours, I’d driven 14 hours, taken two ferries, played a concert for a couple thousand people out in the middle of the forest, done a load of laundry, packed the car with music gear, and then switched it for kite gear) John had claimed what would be our home for the week, and there were a few people flying. I don’t need to be told twice, I had a 1.5 out of the bag and out onto 120 foot lines in minutes and voila, we had six fliers flying in formation. A fine start to a week that would just grow and grow. 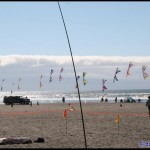 You can get the day by day, blow by blow account through the Daily Updates we did while at the festival, however, it goes without saying that it was truly a great time. What was most interesting for me to watch was the daily progress of fliers who started out with little or no experience whatsoever in flying with others and found themselves later in that same day, feeling comfortable (well, somewhat comfortable anyways) flying in groups of 4, 8 or more. Day by day, the crowds behind the ever changing and growing group of us grew as well, people were fascinated by the patterns we flew (and in a few cases, made up on the spot) and this challenged all of us to bring in even more complexity. A simple pattern was linked up to another, and to another, eventually becoming extended sections that could nearly be called “routines”. Some of the most memorable highlights from the week include:

Forming a pretty credible number “18” as a celebration of JD Fabich’s birthday on the Wednesday afternoon. We somehow managed to plan this without his knowledge and I’m reasonably convinced he blushed a little.

Taking it a step further, on the Saturday afternoon at the Quad Mass Ascension, 15 kites managed to form a “25” in the sky to commemorate WSIKF’s 25th anniversary.

Watching people head down to the beach with brand new revs (which happened a lot), eventually selling out every Rev 1.5 in all of Long Beach (some 40 kites in all). 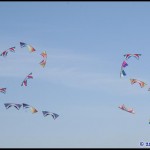 With the last point, we were well set up. People could watch our antics, and then directly beside our area was the Revolution training area where people could see for themselves that it isn’t a tough kite to fly. What was odd for me was that it was the first WSIKF in years where I didn’t get involved in training new fliers, however, despite that, I flew more than I have ever flown at the festival. We averaged at least 9 hours a day of flying, and more on the evenings of the night fly. 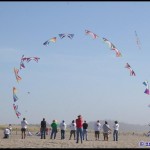 Regarding the night fly, we had tremendous luck. Most years at WSIKF have been pretty dead and often very damp for the night fly, I can vividly remember how heavy the lightest Rev 1 I own felt when it was covered in dew. This year however, there was quite a decent wind and we were reasonably well equipped for lights. I went up first as an individual flyer, and the rest of the team joined me for the end of the nightfly. One thing I can very honestly say is that flying at night, with a team, with dimly lit kites is easily the biggest challenge you may ever run across as a quad flyer. Once we’d finished our demo, we were eager to keep going so we asked the field director if we could fly during the fireworks as well. This ended up being a pretty fine idea because while the fog was obscuring the fireworks for the most part, it provided a pretty thrilling backdrop to fly against.The Kite Museum people got some excellent footage of this flying, we’ll be sure to post a link to it as soon as we can.

And finally, I’d like to take this opportunity to thank a few people, mainly all the people who came out and either flew, or simply watched. I’ve been to WSIKF six times now and this was, hands down, the best experience I’ve ever had there. Also the busiest, but, the most rewarding as well. We have created a few videos from the gigabytes of footage that was shot, these are available here at Kitelife.com, at the iQuad site, and also on Google Video for your viewing amusement.

As for fliers, here’s who was involved at various points throughout the week : 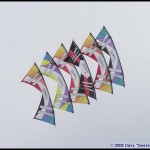 This time last year, “team rev” flying was (with the excellent exception of Too Much Fun in Southern California) wasn’t on anyone’s radar at all and this year, I know of two full teams coming together in addition to iQuad (you may wish to track down Paul LaMasters in the Southeast and Scott Wieder in the Northest to get involved) and I’m fully expecting to see quad pairs pop up at more and more events. I’d also like to thank John as well for having the vision to follow this dream with me. We’re both very excited at the new interest shown in Quad flying and we’ll be continuing to promote it as much as we possibly can, wherever we can. Remember, if you want to see these events at festivals, you simply need to ask and bug organizers. With a little luck, we can field enough people at various events to get both Ballet and Precision events onto a “recognized” status with the AKA by 2008. And on that note, lets quickly switch tracks…

Quadapalooza
(or, how Quads will take over the world)

This year, for the AKA Grand Nationals (which, starts in less than a week as I sit here writing this!), I was asked to be involved with the Quad megafly / funfly / party. Of course, I happily accepted and thus, we have Quadapalooza…

My hope is that anyone who can wrestle a quad (of any description and yes, 3 lined Shivas will be welcomed too) will come out for this. If you’d like to play around with team or pairs flying, we’ll be using our standard 120 foot line sets, and Revolution 1.5 kites (vented or not, depending on the wind of course) however, feel free to show up with whatever you want, the aim is to fill the field with multiline kites and make this the most exciting event of the week long event.

As for iQuad, John, Egan Davis and I will be there, plus we’ll be adding in Alan Cunningham in order to get to a “full four” whenever we can get a few minutes together. You may also see our new team kites debuted but, we won’t know about that until we’re actually there. 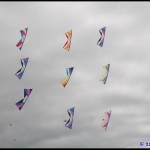 And, keep this in the back of your mind… I’d mentioned this earlier both last month and up above, but, if you like quad pairs and team flying, start asking for it at your local events. There’s a chance at this point that we may be able to run these as “demo” events at next year’s AKA convention in Ocean Shores, but, its going to take participation by as many people as we can muster, in all of the conferences. So get out there and find a partner and start flying. It’s way easier than it looks, but it also offers challenges you won’t find if you fly alone as a quad pilot. The International Rule book contains all the rules you will need, plus some very challenging precision figures for you to work on with your partner.

Oh, and also, Ben from Revolution will be at the AKA Convention and Quadapalooza, ask him to see some of Revolution’s new Masterpiece Series. You can see the Gibian design on Rev’s website and I suspect Ben may have some of the Jose Sainz sails with him for display. Having seen both in person, I’ll say only one word. “Beautiful” There may be further designs along this nature, keep checking to their site for further information. And yes, I’ll be ordering one, to act as my “dress” rev for fancy occasions.

For now, may the winds be with you this fall. if you are attending the Grand Nationals, make sure to find my Monkey banner and come by and say hello. Also, if you have an idea or questions for this column, feel free to email me. if we can get enough questions together, we’ll answer them all in a long article next issue. Thanks again!

Good winds to you,