Meeting up with John Barresi in Portland, we set out on our way to the land of Brookings (OR) to join in their annual festival. I’d heard from John about the light winds and amazing crowd response, I was really looking forward to this trip. As the road rolled along under our feet, we were able to take in some of the redwood forest and its majesty and grace on the beautiful drive between cxvI-5 and the coast. This sorta set the mood for us at the event, a calm, serene and relaxed festival for the public. As the fliers arrived this fine Friday, we enjoyed a dinner put together by Roger and Loretta Thompson (of the Driftwood RV Park) for the fliers and their family. After we got our fill of some great food it was high time for a nap and some much needed rest before the Southern Oregon Kite Festival (SOKF) kicked off in the morning.

Minutes after coming to our feet we jumped in the kite mobile and found ourselves an excellent breakfast at the Oceanside Diner with some good company… Joining John and I were our other two teammates on TKS Mid-Air, Jim McPherson and Scott Ralston. By the time everyone finished their meals, I was still working on my Lumberjack Breakfast which the waitress pretty much had to use a hand truck in order to get it to the table! Okay, maybe not, but it did take her two trips! After breakfast we found our way to the field to get set up, making sure we had a good spot for the day’s events. The SOKF announcer Arnold Stellema gathered all fliers for a short pilots meeting to discuss safety, scheduling and to get our attitudes soaring – unlike the winds we had this first morning of the festival.

As the little bit of fog that was left rolled away the crowds seemed to roll in to take in the performers flying and demonstrating what they love to do fly kites. In between the demos from the sport kite side of the event single line fliers where able to walk with their kites and put on a great display for the crowd. The Bay Area Sundowners made their annual return to Brookings, dazzling the audience with their beautiful stacks of hyperkites. A great performance, mesmerizing even to those that have seen it year after year.

Later in the day TKS Mid-Air flew one of their best performances ever in very light winds after deciding to fly to a new song for the first time… “What the world needs now is love“. There were a great many wonderful performances by various fliers throughout the day, too many to mention… However, I’d be remiss if I didn’t mention Al “Twinkle Toes” Washington, who gave one of his great soulful performances with such style and flare! I can’t decide if it’s more entertaining to watch Al or his kite, truly a monumental flyer in the kiting community.

Another highlight was a featured “youth” demo where Aaron Washington (Al’s grandson), Nathan Ostovar and JD Fabich all did a simultaneous ballet demo which was very well received by onlookers… Flipping things around, Penny Lingenfelter also did some of her unique and popular routines with Revolutions on short lines.

Up from Southern California, Al Stroh, Susan Shampo and Ron Despojado all put on excellent performances with a variety of dual and quad line kites… Ron and Susan paired up at one point as Despo/Shampo for a quad pairs routine as well!

As the sun began to set it marked the end of our show, until tomorrow.  Fliers returned to their rooms to get cleaned up for the evening’s banquet and auction. Suprisingly, with all the support shown by sponsors and fliers, one would have never known that this event was almost canceled… I for one, am glad the community came together to keep this one on the schedule. David Gomberg served as auctioneer while the participants engaged in friendly and exciting bidding wars, raising money for the festival and helping to ensure it continues for years to come.

The next morning we found ourselves back at the Oceanside Diner for yet another hardy breakfast… If you ever get a chance to attend this event, you really must stop in for a meal. The winds seemed to be a little higher compared to Saturday. After the pilots meeting with the ever resiliant Arnold Stellema, it was time to put some kites in the sky and have some fun. John Barresi flew a great demo with his Sea Devil wowing the crowds and his fellow kite flyers by running 360s and weaving his kite in and out amongst the banner row lining the field. Shortly afterwards, David Gomberg was able to launch his inflatable cat in the still light winds.

Among the other featured single line performers were Jose Sainz, Randy Tom, Deb Lenzen, Ron and Sandy Gibian, Scott Skinner, John and Mary Gabby, Rod Thrall, Ellen Pardee, Barry Poulter, and others… Truly one of the best “all star” representations of single line legends at any festival in the country, this year’s Brookings offered up some of the most beautiful and amazing creations I’ve ever seen in one place.

Later in the day, a rokkaku battle started out on the field. Always a crowd favorite, the fliers ran hurridly around each other while trying to get the upper hand, pulling or cutting their opponants out of the sky. A rokkaku veteran, Ronda Brewer came out as the last one standing, showing all the boys how to handle a kite. Carl Bragiel also flew another of his remarkable routines, almost 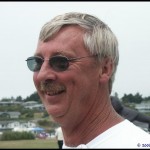 willing the crowd to stop in tracks and watch his skillful flying of three kites at the same time, all making the turns to the music.

A tremendous thanks to the Freemans from Freeman Rock, the Thompsons from the Driftwood RV Park, and the many other sponsors who came together to make this event happen! Not to be overlooked are all the people who did all the “grunt work”, like Steve Blasdell who coordinated field/vendor set up, Sandy Gibian and Lisa Bragiel who took care of scheduling, and Arnold Stellema who sat behind the microphone all weekend, doing a fabulous job of introducing all the fliers and educating the spectators about what it was they were seeing on the field.

For up to date information on this event, future dates, sponsor information and more, be sure ot visit the SOKF web site.

Blessed winds to all,