After you’re into a competition season for a while, every event you attend begins to look just like every other event you’ve been to all season long. The same pilots, same events, same judges, scorekeepers, announcers, even the field setup looks the same. Same – same-same… all a bit of a blur! And that’s particularly true if you visit the same venue multiple times during a season. Even the background looks familiar…

But each event still has its own small “flavor” that marks it as “a slight bit different.” Perhaps some pilot rose to the occasion well beyond his normal capability and upset the ranking leader, or the announcer cracked a joke that struck home – and was repeated over and over again, or the weather turned out to be either perfect for a change – or downright awful (both kinds being remembered for years afterwards).

So the “Cutting Edge Kites Summer Heat” event certainly had the potential to be the same as every other event – including the fact that the very same crowd had already visited Ocean Shores earlier in the summer – once for CEK’s Spring Fling in May, and again for the Ocean Shores International Kite Challenge in June. Yep – we’d already been here twice this year. Indeed, if you count the Northwest Sport Kite League’s Annual Seminar and Business Meeting, some folks were staying in the same motel for the forth time this summer!

But, John and I left Portland for Ocean Shores with considerably heightened expectations this time. This event WOULD be different! Why? Well, this year, Summer Heat (held August 18th-20th, 2006) would include only the second “Tricks Party” event ever held on the West Coast, immediately following the regular AKA sanctioned comps. Needless to say, Kitelife would be there for that one, and John Barresi was determined to fly in it and to do well… 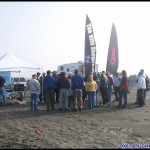 And so, expectations notwithstanding, we woke on Saturday morning to our typical “summer” fare up and down the coast… Very light breezes and a very low cloud ceiling… Nope, the “season” didn’t seem much like Summer to many of us at this point… Okay – Coffee helps in cases like that, and so does a good breakfast, so I availed myself of both. Coffee at the latte stand going out to the beach, and a decent meal and some conversation with a retired Sea Captain I met at the breakfast counter after John was dropped off to tune his kites and attend the Pilots meeting. I mean – that’s fair, right? Barresi flies and hogs all the glory (No – he really doesn’t do that), but I get to drive and take photos and write event reports – and eat! 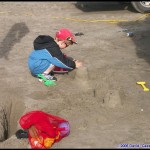 So, back to the beach again, just in time for the first event following the pilots meeting. Without going into any detail whatever (Yep – my memory is back in ‘blur” mode again), each event was reeled off in allocated sequence and hit their time slots, more or less. (We are flying on “kite time” of course!) The Novices, Experienceds, and Masters all flew their Precisions and Ballets with both dual-line and multi-line kites… Where registrations were light, some events were combined into an “open” category, so everyone flew regardless of class and scores were separated into classes only in scoring of the event. Everyone seemed to be working hard to stay on track and up to speed – except the judging panels for some reason, and they seemed to take forever. Winds remained light and variable, and cloud cover gradually rose and dissipated over the day, to the point where we actually saw some real sunshine – about the time the day’s competitions ended.

If there was a noteworthy event during Saturday, I suppose that the only part of the day I can remember was the unveiling of iQuad’s new banner that Amy Doran had been busy creating. Speaking of that team – I’m not certain, but I don’t think it’s possible to write an NWSKL event report without mentioning iQuad anymore… Not that the team is so special or extraordinary (we’ll skip that discussion this time around), but due solely to the fact that iQuad has had such a tremendous effect on the NWSKL league this year. Now iQuad is the only multi-line team in NWSKL at this point, so you might ask why they’d have such an effect on the league. Well, it’s because the iQuad team also flies in Experienced and Masters / individual and pairs / dual-line and multi-line events as well as multi-line team events. So in any specific discipline, you’re likely to see a couple of the iQuad pilots flying in that event and perhaps one or two more judging it. Nope – there’s no “team favoritism” that I know of, and I’d have heard if that were charged by anyone, but these iQuad fellows are all over the field – both individually and collectively. And there’s truly the impact!

Immediately after the competition and tear-down, the entire bunch removed themselves to a small nearby park for the normal “pot-luck” dinner which also served as the annual “NWSKL Awards Dinner.” The league bought the Hamburgers, Hotdogs, and drinks, of course. And – it turns out, they also bought a whole lot more. Following an exceptionally nice dinner (Great Burgers!), Don Ostey, the NWSKL President, handed out the awards. First to come were the awards for the events flown today – followed immediately by the cumulative awards for last year’s NWSKL league champions. There were jackets for each discipline, as expected. Where an individual had won in more than one category, multiple awards were combined on a single jacket. John Barresi, for instance, has a jacket with quite a few notations on it.

In addition, the league had come up with several “additional” award categories. Theresa Norelius won an award for her contribution to “League Spirit,” Amy Doran won as “Most Improved,” John Barresi for “Recruiter of the Year,” Alan Cunningham for “Sandbagger of the Year”, and so forth… Finally, the awards were all given out and it was getting to be dark enough that nobody wanted to hang around and chat anymore. Time for us all to grab a little relaxation back wherever we were going to hang our hats for the night.

Sunday morning was a close copy of Saturday’s weather, save only that the low overcast was actually producing some precipitation on and off now… We’d see that kept up in occasional spits until early-afternoon, when it finally quit – but continued to threaten anyway, just to keep us on our toes. I grabbed myself a coffee on the way to the beach, but waited a while before I went after more eggs and hashbrowns again. 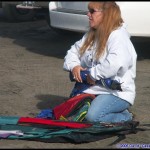 The pilots meeting got underway a half an hour earlier on Sunday, and then it was right into the Masters Individual Ballet – the only individual dual-line event held over from yesterday. Following that, they were into Pairs and Teams, both dual-line and multi line – all flown in “open” sessions, with classes determined on the scorer’s forms after the events finished. And where there was an opportunity to save time, it was done. For example, iQuad, as the only multi-line team to fly, flew their precision event – followed immediately by their ballet event without ever leaving the field. Okay, so they saved 5 minutes of stage-in and stage-out time there… The idea here was to finish fairly, but as quickly as possible so that the Tricks Party session to follow had plenty of time… So – “kite time” got a bit aggressive on Sunday, and the last events were announced, flown, judged, and finished with dispatch.

Then it was time for tear-down and setup at the same time. The regulation AKA 100 square meter flying field was torn down and packed away, but the NWSKL’s sound system remained on the beach. And instead of the square flying area, a large circle defined by little flags was drawn in the sand. Meanwhile, all participants packed away their Precision and Team kites, and got out their all-out “tricksters” for a little practice before “the show” started. Soon, all was ready, with Egan Davis as Chief judge supervising a handful of other knowledgeable judges, and Scott Ralston as Field Director – and before you knew it, we were rolling!

I don’t know if you know all about Tricks Party or not… And, rather than trying to explain all about this very different way to compete with Sport Kites, I’ll direct those who want all the authoritative “details” to the official “Tricks Party USA” website. 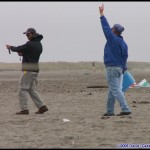 For several of the seven participants, this Summer Heat event would be their first “Tricks Party.” And, believe me, there’s a learning curve to competing in this new “Tricks Party” format, and those who’ve not had the experience are at a disadvantage. Still, some “newbies” flew quite well, and have the points and some good feelings about the sport to show for it.

Soon, the beach was back to normal and we were all headed for Cutting Edge Kites, where the scores for today would be announced and the awards handed out (full results can be found here). That was soon accomplished, and a fair number of us grabbed a meal at the Mexican restaurant on the way out of town. “Yep – See ya at the next one, guys!”