There aren’t a lot of exciting kite trips in December and early January. So when Kitelife called for a pictorial essay, I looked over some of my older updates and found this classic. Kites are not the only constant in our lives… 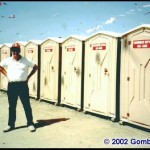 There comes a time, frequently, when every kiteflier needs to go. And if you are a kiter that travels the globe, those occasions can become an important part of the adventure — to say nothing of the cultural experience. I’ve seen some amazing toilets on my trips.

My worst memory was in Thailand. It was a sweltering hot, humid day and they pulled a metal trailer to the edge of the field with a bunch of small stalls inside. Facilities were “Asian Style” which means a hole in the floor you squat over. We called it “the oven” and fliers took to whistling the theme from “Bridge on the River Quai” whenever they walked off in that direction.

I’d had an excellent spicy meal the night before, so, at the risk of being overly graphic, I invite you to imagine me, balanced precariously on the balls of my feet, dripping with sweat, wishing there was some paper around, and hoping I wouldn’t pass out from the heat and stomach cramps and fall in….

Asian toilets are not always a bad experience.

I visited Dubai a few years ago, and once again, it was very hot. But the W.C. was tiled, air conditioned, and comfortably cool. 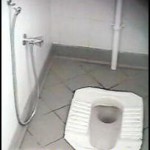 We used the restrooms for relief in more ways than one. You couldn’t exactly take a magazine and read in there. But you could cool just about everything down. BTW – that hose is for washing up when you are done.

Which way are you supposed to face, anyway?? Modern Commode Science uses a variety of techniques to promote comfort and hygiene. 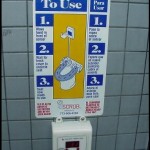 One good example is the “auto-flush”. An infrared sensor takes note of when you are finished and immediately empties the bowl for you. Of course, that also means that every time you lean over, everything beneath you disappears and you get a refreshing splash. 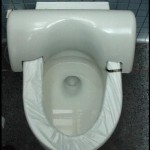 A variation on the “auto-flush” is the “auto-seat-cover-advance”. I’d seen them in France where no one seemed to use them, and again in the Chicago airport. This one is made by the SCRUB company and promises that the “old plastic cover is *never* used again”. Ya think??

Please note the bi-lingual instructions — “waive your hand — wait for cover to encircle seat — seat now ready to use”. I ran this through an online translation program and got a really interesting response. I also found that I had to waive my hand a lot to get it working. And all the while, I was wondering what the guy in the next stall was thinking about the photo-flashes coming from my side of the divider…

In any event, you can see the “auto-advance” in action if you click here. Notice the soothing background music they provide in Chicago… 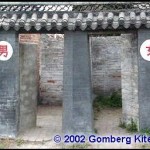 OK — so here is a test. You’re in a small Korean Village and the beer you had with lunch has caught up with you. You politely ask for direction to the W.C. and this is where your search leads you.

And don’t even ask what it looked like inside…

Part of the charm of kite travel is getting close to people of other countries and cultures. But there is a limit to how much of the lifestyle you want to share.

One trick I’ve learned in airports and department stores is that, if you don’t like what you find behind one door, open another door. Often you will find a variety of accommodations.

I particularly like the ones with instructions not to step up and squat on the commode seats.

Of course, if you don’t like what you find in your hotel room, that could be a problem. Chances are that all the other rooms are pretty much the same. Although at our Royoken (B&B) in Uchinada, that was actually not the case. There were Asian toilets downstairs and Western ones upstairs. So the fun was to not tell the newbies until the second day.

We did however all use the same (single-sex) bathing rooms, complete with washing stations on mini-stools and a single large soaking tub. But that is another story.

Japanese toilets — especially the Western ones — can be a relaxing and refreshing experience. They can also be intimidating or even embarrassing. It all depends on how adventurous you are.

What would you do when faced with an instruction panel like this??

As it turns out, one controls the seat temperature, one the various ‘washing’ functions, and one the water temperature. But not all toilets have instructions. And how can you avoid the temptation to push buttons on a toilet seat??

Here’s what happens if you do. First a small arm comes out from the back of the bowl, very slowly rotates around, and then *forcefully* projects a thin stream of water. At virtually the same instant, it pops back into the recesses of the bowl so it won’t get ‘dripped’ on.

You can usually tell when someone has been testing the buttons because they come slinking out of the restroom with a large wet blotch just above their knees. That’s what happens when you are standing facing the commode. If you are sitting on it and start pushing buttons and don’t know what to expect… when that might be an even bigger surprise!!

BTW — all of this only works if the seat has been depressed. It is some kind of weird safety feature. That’s why you see the edge of my foot on the seat in the lower picture. I’m holding the camera with one hand, and a towel in the other so I won’t get drenched. So taking this shot was quite a feat! 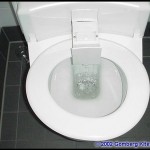 And if you think Japanese engineering is the pinnacle of toilet design, check out this “smart toilet” we encountered in Germany.

As you begin to stand up, that infrared sensor alerts the system and a small box slowly extends from the back of the water tank. This cleaning mechanism lowers onto the seat and then slowly, the seat itself rotates around. I had to run it several times in total fascination and then went running for my camera.

Germany should be very proud of this latest advance.

I’m going to conclude my international toilet tour with an image I’ve carried with me since my very first overseas festival in China back in 1990. 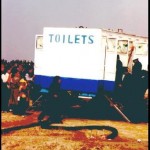 We were flying on the salt flats outside the city of Weifang. There were literally hundreds of thousands of people. And there, at the edge of the field, was this blue and white relief vehicle. Men were on one side and women on the other. The men were lined up on the steps and crowded around the doorways three-at-a-time.

The part I remember so starkly were the pipes coming out of the structure, traveling about 30 feet, and then emptying onto the field.

I flew on the other side of the arena…

So what words of wisdom to I have to offer the inexperienced traveled who is daunted by the prospects of “going” abroad??

It’s all part of the fun. And trust me, the worst toilets make for the best stories.