What a difference a few days make. It’s only been 24 hours since I parted ways with the members of Kite Clubs from all over Texas who got together to fly kites and enjoy good food and good company. The news is talking about a cold front sweeping the nation and putting freezing rain on Houston’s doorstep. The 1st annual Rockport Beach Party was held Jan 13th and 14th In Rockport Texas. 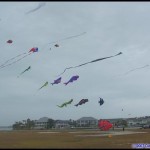 Rockport is on the Gulf Coast near Corpus Christi with a waterfront view of Aransas Bay and the added benefit of a barrier island for protection from storms in the Gulf of Mexico. The area is ideal for Kite flyers with the winds blowing across the bay most of the time. On Friday night the flyers began to gather at a local establishment called the Poor Mans Country Club. It’s a casual no coats and ties allowed watering hole that make you feel at home when you walk in the door. Most of the talk was about the 30% chance of showers and how they would effect our planned day at the park. After sharing their opinions and catching up on festivals that were missed the group retired for the evening to their homes and several local hotels.

Sat morning found the gang from Houston gathering around the table at JJ’s restaurant for a hearty breakfast and once again the discussions were about the prospects for Rain. The morning air was moist and cool but the 5-7 mph winds were calling us to the park.

When I arrived at the park there were already a large number of kites in the air. Locals from the Windchasers Kite Club had claimed their part of the park with lots of color contrasting with the overcast sky. Within a short time the groups from Houston and South Padre Island along with Austin had arrived to put on a show for the curious onlookers. Since it was on the coast there were numerous flying fish to be seen along with a new face in the crowd. The South Houston Area Recreational Kiteflyers or Shark had their newest creation in the sky. He was a large purple shark that delayed one member’s departure waiting on the ups truck. The crowd loved him so he was worth the wait.

A giant eel was also spotted along with dogs and octopus on one end of the field. At the other end several small and mid size Geckos were keeping an eye on the lobster and a diver flying near by. A large spiky ball and a 91 foot gecko rounded out the collection of creatures drawing the cars off the main street across the tidal basin and into the park. Once in the park they were treated to members with traction kites on land boards and numerous flyers showing their stuff with the multi line kites. Several times during the day group demonstrations were flown and to most peoples amazement the kites intermingled and still stayed in the air. Just when they thought they had seen it all a very skilful demonstration was presented using multiple sets of kites and one flyer. 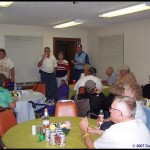 In the early afternoon the overcast skies turned dark and most of the flyers were able to pack up and stay dry. The large gecko was packed away and a helpful group was pulling in the rest of the kites when the rain hit. In normal Texas style nothing is done small. After the second or third big drop hit you figured you were already soaked so you just kept on working and watching for lightning. The yards and yards of wet material was stuffed into bags and thrown into the back of a pickup for the trip to the hotel. The hotel rooms became a little brighter after the flyers pulled the wet nylon from their bags. In one room banners were propped against the ceiling and a diver and fish swam across the chairs. 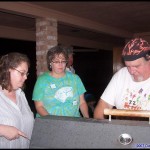 The group got dried out and then headed to the community room to find hot Barbeque on the grill and plenty of pies and cakes to feed and army. The evening ended with discussions of night flying and the talk of adding it to the activities of things to do when we meet again next year.

Sunday morning the routine was much the same with the breakfast crowd gathering and the flyers wondering about the weather. It did not take long for the wet kites to be pulled from the bags and hung in the sky. Line laundry took on a new meaning as the wet kites were hung on the lines and soon began to fly on their own. It was not long before the sky was once again full of color. 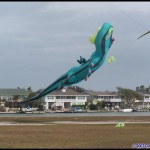 The highlight for the day for some of the observers was when the large gecko was pulled from its bag. In the haste to get him packed away before the rain the bridle had gotten tangled. The roadway was soon filled with cars as the gecko began to inflate lying on its side. In a short time he was untangled and ready to fly. Due to the possibility of more rain he was kept on a short leach and that allowed the kids to get a close up look and take in the overall mass of the big kite.

As it got later in the day kites were packed away and goodbyes were said as the long drive’s back home was begun. After the field was almost empty 160 bamboo and silk discs anchored by a large dragon head stretching 200 feet took to the air. It was only fitting that the last kite in the sky was a silk and bamboo creation from years past replacing the nylon and fiberglass kites that are so popular today.

The big question of the day is who are you all? They were shocked to find out that we are just grown men and women who enjoy getting together and growing smiles. Many people in the crowd expressed a desire to see a festival return to the area after several years’ absence. The beach park charges a $4.00 daily entry and you can also purchase a $10.00 Annual pass. On a normal winter weekend day the total is $30- $40.00 and Saturday we were told that the income was over $700.00 for the day. That does not include the people who entered the park on a pass. With that kind of interest in the community a festival is entirely possible.