For the past twelve years the Kite Flyers of Tasmania have descended on the small coastal town of St Helens on the north east coast of the island. It is here we hold the Binalong Bay Kite Weekend.

We traditionally held the event on the beach at Binalong Bay but since the rest of the world has discovered this tranquil piece of paradise, room is hard to find, it now resembles more the images of Bondi than the once sleepy little fishing village. In the past couple of years we have been travelling up the coast about 10 kilometres to Taylors Beach, an open stretch of pure white sand that extends about 5 kilometres up to the next hamlet called The Gardens. Any more than 10 people, on this entire beach is considered a crowd! 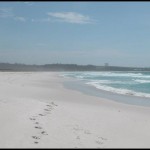 This year we were blessed with onshore sea breezes to about 15 Knots and everything seems to fly well. Steady winds, warm sunny days and equally warm water makes this just one of the most sublime kite flying places on earth. The group was small this year with Karen and Godfrey Gamble being the only “out of towners” to cross Bass Straight. That didn’t stop the group of a dozen or so flyers having a tip top time.

The following weekend we continued with a kite event in the northern coastal town of Devonport. Travellers to the state normally eat and drink their way to this town during the week in between the two events. Tasmania is renowned for its cool weather wines and outstanding food, so finding things to do in that week is hardly difficult. The island is a holiday destination with one third of the state being designated as World Heritage due to its cool temperate rain forest, some of the last left on the planet. 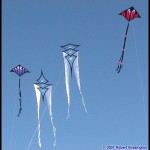 The intrepid kite flyers met at the flying field on the Saturday afternoon for a casual fly before a typical BBQ and Ian and Avril’s home in the next town down the coast. The Sunday is normally kids fly day with music. This year we were again rewarded with warm windy weather and the skies filled up quickly. Over the past few years the service group, Rotary, have raised funds for the local charity’s at this event by Teddy Bear Drops. This is not one’s normal dropping from a kite, but a helicopter. Teddy bears are sold to the public as well as businesses at a charge of up to $100. These bears are then lifted by a net to a height of 300 ft and dropped. The bear that lands closest to an “X” on the ground is the winner. The owner of the winning bear then gets to select the charity to which $4000 is to be donated. All funds from the event, this year over $10000, are redistributed to other charities.

Kites of particular note this year were from Ian Flewellan. He was flying his award winner flock of Yellow Tailed Black Cockatoos. Although these kites are individually small, flying them on a single line gave them extra presence. He has been working on his simple sled but has converted it into a form resembling a skeleton, with wonderful effect. Malcolm Dick specialises in hand painted Tyvek and over the years has produced wonderful kites, mostly with Asian themes. This year his hand painted Koi worked well, particularly on the beach, and his large Yakko was an instant hit. Karen and Godfrey bought their “ Megs Head” inflatable, and after running modifications, improved its performance yet again. They call it their “Works in Progress”. All in all this was another successful double weekend in the summer skies of Tasmania.

These two events are on the calendar for next year again and all are welcome to attend. Tasmania is an ideal respite from cold and drab northern hemisphere winters. The events are held in February of each year.