Hi friends of Kitelife. Do you remember my first article about MKF? Well, this is the next level about it and I hope it will be a useful guide.

So, are you ready to start? This time, I would like to describe my experience specifically flying 2 kites at the same time with some tricks incorporated. Tricks? Yes… Tricks! Look, in my routines of MKF (2 or 3 kites) Sometimes, I do some tricks because is challenging, funny and fashionable. In fact we have got our aerial ballet the same as team do; why not to try on?

Maybe you are wondering: What kind of tricks we can do at MKF It sounds very difficult, isńt it?

Well, with practice it’s not so difficult. Let see… try with this:

You can do all the tricks mentioned with two kites at the same time or one at time. I would like to emphasise that the key in this step is flying two kites with independent controls, tricks included, at the same time.

You have to choose the alternatives mentioned above. Therefore, if you choose the first one, keep in mind that is necessary synchronize very well the movements with your body and arms.

Is a good way hearing music or count in fourth…1 – 2 – 3 –4…go…rhythmically to take tempo during your flying.

Let’s start describing the first trick performed with both kites together:

Take off the kites moving your arms smoothly backwards, when the kites reach the middle of the wind window, pull back both arms to your front quickly at the same time. The noses of the kites are going to point away from you, belly up positioned with the lines extending toward you over the trailing edge. In addition if you want to do a turtle release, keep them walking or running forward.

Eventually to recover or coming out of the turtle pull both handles backward at same time and the kite should flip back toward you. Alternatively, if you do not recover the turtle land in that position, walking forward doing the kites losing height toward the ground. After that re-lunch and repeat the exercise.
The most important thing is to coordinate arms movement, sometimes faster and sometimes slower depending on the wind or kites speed.

If you find any difficulty at the beginning, try one kite at time. Then take off both kites living one on the zenith (Example the right kite) trying the turtle with another. Consequently, repeat the exercise a.s.a.p with the left one.

Remember you are MKFlyer; keep this idea in your mind all the time. 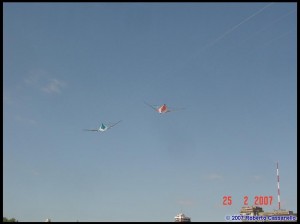 In a same way try to do a fade. Again, start at taking off maneuver and let the kites reach the zenith, after that pointing the noses to the floor (downwards) and when the kites stays in the middle height of the wind window do a pancake from a dive popping both handles at the same time. After that, when the kites noses are pointing towards you extend the lines over the leading edge and leave the kites floating in that position. So you are in Fade.

Nice trick is when kites are positioning at the same height…Wow! Is very fashionable!

To recover from fade, slack the lines moving arms forward and turning your wrist out laterally (kite noses pointing out to the edge of the wind window), so the kites turns according to the applied force changing flight position.

Due to the kite noses are pointing on the opposite side; you can practice straight flying, moving your arms in the same straight trajectory of the kites.

Take care if your kites are flouting near the arena, in that case let the kites reach middle height and coming out the fade as described above.

Opposite, if you do not want to recover, you can land in fade repeating the exercise from that position putting the kites on the ground in pancake.

This trick is a series of alternating between pancaques and fades. To do it, I really recommend beginning the maneuver by flying straight down from zenith. So, you can lunch the kite as the description above and jerk both handles generating a belly float and inverted back flip. Repeating this rhythmically doing Flic Flac…Flic Flac…Flic Flac…until you run out of space.

Remember, is better hearing music or counting in two…1…2…rhythmically.

Alternatively you can do it alternating both kites’ movements. – Alternating left and right hands – Eventually you can finish this trick putting the kites landing in a fade, is very fashionable!

This trick involve roll and unrolls the lines around the kites. I recommend that the noses orientation have to be the same for roll and unroll, I mean, noses down or up, because we are driving two kites at the same time.

Maybe, this trick is much more difficult than the previous described because both kites have to rotate on the pitch axis 360. Remember; if you have difficult try one kite at time.

In advance imagine the picture on the air in which 4 lines are wrapped around 2 kites at the same time driving for one pilot. Wow! Wow! Wow!

The easiest way to do this trick is starting at lunch noses up and give a sharp tug to pull the kite forward (turtle), soon release with slack so the kite continues rolling around the lines. It helps walking or running forward. Afterwards putted kites in Yo – Yo continuing flying strait to the zenith just for a seconds and unroll on inverted maneuver to recover from Yo – Yo.

I love to do this trick in which kites are flying in opposite way (horizontally) rolled and when kites are crossing in the middle of the wind window, I unroll both kites at the same time and continuing flying in an opposite way. Real impressive!

This trick is called docking by some people. The follower kite docks inside the lines of the leader and the two fly at single entity. Both are flying forward together.

As son as those are docking, moving both handles in the same way to fly in a single entity to the right or left. Keep both kites together and do squares, rectangles, circles, infinities, and triangles in a single entity. It is wonderful hear the kites in refuelling run trough the air like a flock. Beautiful image!

Alternatively you can do refueling with “two kites in continuous flying”, that maneuver is different from staked the leader at 10. In this way both kites could be moving from different trajectory. So at first, you have to tune the follower kite jus a little faster than the leader and flying with different length lines assuring docking maneuver (see my first article).

Look I’ll try to explain on this way:

Bring the arm which is driving the follower kite to your chest and immediately pop out quickly the arm forward doing of follower kite stop for seconds. You will see immediately that the kite split of the leader… Ha! Incredible! Undocking!

I assure that you said: Wow! So, after that continuing flying to you own judgement.

You have to practice docking and undocking with both hands several times in order to gain experience. Remember that the next step is flying 3 kites at the same time doing refueling. 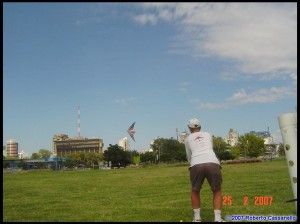 This maneuver is a landing in which nose down away on the ground. (Belly down) Start taking off and leaving the kite reach the zenith, then, pointing noses down flying straight and at the last second landing in a belly down on the arena. In that place the kites have to remain. At first I should recommend to do this trick on one kite at time.

Here we go guys; one kite at time:

Put both kites on the zenith, after that point one of them nose down (maintaining the other one stacking on the zenith) when the kite is near the arena, puush the handle forwards quickly and land it in a belly.

You will be lucky if you do not crash the nose on the ground…Ha, Ha, Ha…

You will gain tempo with practice. Afterwards we can launch the kite in a fade because the nose is pointing away. Therefore if you can do all of those tricks well, is a good point to practice combination tricks for routines.

Did you do this exercises?…well…go for a drink!
This training process will improve natural and synchronize movements.

Particularly to John who taught me to improve my techniques of flying. To Dave who opened my mind with his thoughts during their visit to Argentina. Also to all my friends from USA, Spain and Argentina, who help me to learn all the time.

Author Note: The author does not assume any type of responsibility in the application of this training method, by damages in the materials of flight equipment or those can be caused by pilots during trainees, competitions or recreations flying. Please practice safe kiting at all times, and teach by example.