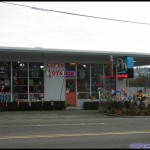 Our kite shop occupies approximate 1200square feet, another 800 square feet is our parts business, it is both internet and brick and mortar. The rest is dedicated to inventory storage and offices. We have a view of Lake Union from out our shop so all we have to do is look out the window to determine the wind speed. We are located on the outer fringes of the Center of The Universe, Fremont. It is here that all the eclectic crazies of Seattle congregate. We are a store based in the big city so we are neither a tourist shop, or a mall shop but a destination shop. 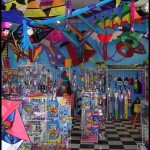 As Mike Gillard once said to me, “Kathy, you are as old as dirt”. I have been in the business since 1979.

For a while (1977-1978), I did voluntary work for Great Winds Kites when Ken had a couple of partners named Bill Huff and Tom Zephyr. I made kites and went to the store and had them bridle the kites for me. When I was in between jobs (I have my degree in Chemistry and worked in hospital labs), I volunteered to help sort out fabric in Ken’s warehouse.

I ran across a star shaped pattern. I took fabric scraps home and came back and showed the guys what I had made. They put it in the store and pretty soon I was making a bunch of them for interior decorators that Bill and Zephyr referred to me.
I entered the same kite in a juried Street Fair and was accepted. I was the first person to put kites into the Bellevue Art Fair and be accepted. Kite stores from all over the world asked me to make kites for them so I did.

At that time there were kite distributors who carried several different kite artists. One of them asked me if he could carry my kites so I said sure. He also took me to Dave Checkley’s house. Dave was hosting the banquet for the 1980 AKA convention. I had never heard of it but it was being held in Seattle that year. 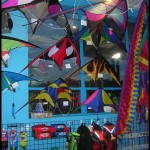 I merrily pumped kites and other winds things out for my new distributor and my products became more popular. At the end of the season the distributor had trouble paying for his last batch of kites so I asked him for some of the other kites he carried in lieu of cash. That is how I started my kite shop. I have been selling kites ever since.

I started to take my business a little more seriously and hired a coach to help me get my ducks in a row. I thought I wanted to be the best high-end kite shop there ever was. I carried every exotic kite on the market but my retail staff and coach made me realize there was a greater need, a more fundamental need, and that was to bring more people into kiting by teaching them the basics. I have printed up the top ten tips for flying your single line or dual line kite. It just thrills me to see how grateful people are that I would take the time to tell them how easy it is to fly a kite. So here is my shop The Gasworks Park Kite Shop just a few blocks away from where I flew my first kite 31 years ago. Who woulda thunk it! 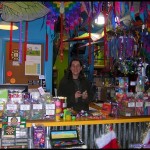 I know I should say Kitelife, but my son put this one together so I have to be a good mom. I am very proud of his work. Besides you should check it out. It is great!

I am going there in two weeks. It is a magical mystery tour. It is about the art of kite making and kite flying. 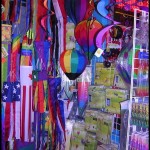 To incite new kite flyers to make and fly kites. One of the best things about getting older is that you realize there will be people left on the earth after you go. The best thing you can leave them is a legacy. I use my store to pass on all the knowledge I have acquired about kite flying and kite making. Then I make them excited about that knowledge. I want them to want to learn more so I pass on as much information as I can. I figure that by doing so I will make a difference in someone’s life.

I remember traveling to San Francisco in those early years and seeing a rainbow mylar dragon flying up through the tall buildings down town. I still have a hard time believing that it could be done but I saw it with my own two eyes. So that is the specialty of my store, all the kite stories I have acquired through out my years in kiting.

I merrily sewed kites and other winds things for my new distributor and my products became more popular. At the end of the season the distributor had trouble paying for his last batch of kites so I asked him for some of the other kites he carried in lieu of cash. That is how I started my kite shop. I have been selling kites ever since.

“You will never make any money at that!”

I went to Gasworks Park one time to test fly a kite I had just made. I ran into Louise Crowley coming down from the hill. Louise was one of the kite elders when I first started building kites.

She was one of the few other women kite makers in the area at the time. She was a crusty old curmudgeon but at times she was absolutely poetic. She always called kite flying “fishing for Angels”.

Louise saw me coming up the hill with my brand spanking new kite and she grumbled at me as we passed, “you will never make any money doing that.” I didn’t say anything but just smiled because she actually scared the bejesus out of me. Louise was a well-known leader of the “Wobblies” in the unionization of workers in the Seattle area in her younger days. So when Louise spoke you trembled.

I don’t think I ever thought about making millions of dollars with kite making, all I knew is that it made me happy. Actually I did not make millions, but then how can you put a price on what I have learned? 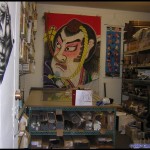 I would like to say all the movie stars and rock stars who have come into our shop but it isn’t so. The best sales are those to kids and adults who come into the store who want their first kite. It is even better when they come back with their eyes big and their enthusiasm brimming because they want to try another kite. That first experience was so fantastic they want more. Don’t you remember that yourself?

Every issue, after all Kitelife is our portal to the kite world.