It’s February already? WOW, where has time flown? Maybe time to think about our old friends who show up every year for the Third Annual Lincoln City Indoor event… which means, I get to spend some time with my pal, Scotty Weider, again! OH, BOY!!! (Yeah, that’s the way it is around the Kitelife Office sometimes…) 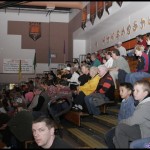 Anyway, YES, the Lincoln City Indoor event is certainly an indoor event we all look forward to every year because it is truly a “Show!” Yes, they also hold a round of Indoor competitions, but the show, organized and produced by Lee and Debbie Park (Aerial Experience) under the auspices of the Lincoln City Visitors and Conventions Bureau (VCB), is truly something special. No more wandering around some gym floor in your street clothes pulling axels and up-n-overs on your latest indoor kite. This thing is planned, produced, and choreographed! We have Costumes!!! Themes, and music to go with ‘em! Theatre Lighting (plus a big smoke machine, too), a decent backdrop, and the whole event just “flows” like a professional performance. Gosh, it’s great fun… Oh, and there’s a real audience too, in case anyone wonders… Yes, they PAY to see this show, folks!

Okay, after all the organizing phone calls from Barton Howe of the VCB are over, we finally get to congregating. Lee and Debbie are in from Las Vegas, Lam Hoac rushes here from Toronto, and Andy Becker and his family fly in from the upper Midwest somewhere – and my friend, Scott Weider comes in from Rhode Island. And kiters begin driving in from far and wide too, including some down from British Columbia. Me? We don’t have very far to go – a matter of about 80-90 miles, I guess. So I pick Scott up at the Portland airport on a Thursday evening, and we all go over to Theresa’s where Lam is cooking “asian” again! UMmm..!

And, next morning finds us back on the road again. Well, we eventually end up at Taft High School in beautiful, downtown Lincoln City (the only city in the country that’s 10 miles long and four blocks wide) – site of the festival, just as it’s been in prior years. Things are a bit cramped this year since half of the High School has been taken over by one of those Beauty Pageants affairs, but we’ll make do. We have a good gym plus a spare “practice” area, there’s been decent publicity for the event, most of us have been here before so we know what to expect, and there are plenty of other “Constants” now too – not the least of which are our Producers – Lee and Debbie Park! So we soon get into the swing of things. Scott unlimbers his favorite Indoor Rev and joins the crowd (maybe 6-8 other pilots?) out there on the floor and begins to re-familiarize himself with the air currents of this place. I go off to do my “meet and greet” stuff, dragging a camera long just for drill too. Yup – we’re underway. Festival Time!

Meanwhile, Theresa from the Kite Shoppe and Mike from Elmer’s Flag and Banner show up and begin to set up their booths in the only space available – the entry-way – right along with 2-3 food vendors, a couple of crafts booths, Lincoln City’s Sweat and Tee Shirt shop, and the ticket-table for the “Show” itself. Yeah – it’s a mite cramped, but they make do as well… So I wander out there and meet Barton Howe who is new with the VCB this year. As might be expected, Barton is a bit frazzled around the edges, but he’s bearing up pretty well given the circumstances. I don’t hang with Barton long, but soon make my way to the “backstage” area to say “Hi” to old friends and introduce myself to some new ones, too. About the only pilot there that I don’t know is Andy Becker, one of Lee and Debbie’s protégés who turns out to be just about what we expected – am extremely nice guy, and a quality indoor pilot too!

And right around 1:00 PM on Friday, it’s time for the first (and only) rehearsal, where “the show” all gets nailed together! The pilots have all received their music assignments weeks ago, and nearly everybody’s here, including a couple of pilots who’re willing to “fill” for those who had to work today or are still on the road… And in a matter of about 2-3 hours, the show’s “cast’ assembles, goes through one “talk-thru,” a couple of “walk-thrus,” and one complete “dress rehearsal,” and then we’re all set to go! WHO SEZ kitefliers can’t be professional about this stuff? Well, these pilots certainly can be when Lee and Debbie Park do the kind of top-notch planning and organizing job necessary to get the job done!

Now, I don’t know if you’ve ever seen the kind of show that Lee and Debbie produce. And I guess maybe I don’t really know what kind of shows the Parks’ Aerial Experience Productions creates anyhow, but I DO know what we “Experience” at the Lincoln City Indoor fly… This year’s “theme” is kind of “retro-60s” – complete with lots of tie-dye tee shirts (and one green polyester “Leisure Suit”) and colored glasses. Oh – and the music is ALL from that Liverpool bunch – the Beatles! And this show turns out to be a real Peach! What a KICK it was!!! Yes indeedy, Ladies and Gentlemen – “Here Comes The Sun!”

And, for those of you who’re Kitelife subscribers, you can watch a video of the full Friday Night production by clicking right HERE and logging in!

For those who aren’t subscribers however, you missed a good one – again! But I’ll give you a quick recap here, just so you know I’m really not pulling your leg…

“Because” – Debbie Park –gymnastics in a Hammock-Swing

And – lest you worry – everyone flew well, with few errors if any. On sure, there’re always a couple of “unplanned landings,” and maybe a missed queue or two, but the paying audience (250-400 folks per show, I’m guessing) saw none of it. Instead, what they saw was professionalism and showmanship from all involved. Bob Wendt did his now-common excellent job as the show’s announcer and the cast all helped each other whenever and wherever necessary.

Yes, it took just under an hour to perform the whole show. Yup – they did four shows – one Friday evening, two on Saturday and one on Sunday, too… AND, we also worked in an AKA/NWSKL Sanctioned OIIU Comp on Saturday afternoon between shows as well. Without going into any significants detail, I’ll let you know the comp results right here!

And, in Hot Tricks, Lam Hoac walked away with the trophy for that one!

So that’s all that happened, right? Four “shows” and a comp?

Well, not exactly… Where the NWSKL and Lincoln City are involved, there’re always the “other” ad hoc events too! Barry Poulter showed up, “new kite” in-hand. Bazzer’s one of those delightful guys who “makes” an event like this one shine – just by being there. Yeah, I DID leave Lincoln City with a new kite – and a wallet considerable lighter. And Ronda Brewer and Lindsey Johnson put on a fine “Build A Kite and Learn To Fly Indoors” exhibit – both making and teaching throughout the whole weekend. Jeremy Colbert and family were around, helping everyone as usual. And Amy “Mousie” Doran and David “Monkey-Boy” Hathaway showed up, and spend most of the weekend either filming the event with a camcorder or flying their Revs on the beach at the “D” River Wayside.

Then there were the “eats” and “sleeps.” A bunch of us always end up staying at condos about 8-10 miles south of the High School, and this time was no different. It seems like we had close to a dozen people staying down there this time, so there was a fair amount of “kite talk” in the evenings. And, while we were all on our own for dinner Friday night, we ended up with humongous plates of Roast Beef (and I mean “cover the platter” hunks of beef) at the Pier 101 Restaurant on Saturday after the last performance of the day. And when we got up on Saturday morning, many of us took advantage of an offer of “Free Breakfast” over at a local church – hosted by our old friend Ron Sears, who used to be “the guy” at the Lincoln City VCB before passing the baton over to Barton Howe. Good to see Ron, as he’s been a stalwart “kiting” supporter over the years in that town and we’ll miss him for years to come. And finally, when all was over and done with, Lam Hoac did his “usual” thing, asking for donations to cover food costs and then cooking for the “mob” on Sunday night. AND – If you’ve not had the chance to take advantage of Lam’s offer in the past, for heaven sakes, DO NOT MISS IT in the future, wherever and whenever you happen to have that opportunity!

So we all ate darned well, slept well, and partied a little, right along with putting on a pretty darned-good show! Thanks are in order to the Lincoln City VCB (Barton Howe), the various sponsors and vendors, the “volunteers” like Ronda and Lindsey and Jeremy and Debbie Cooley and Ken Tuminnia and all of the other people involved – and very especially to our Producers – Lee and Debbie Park! But all good things gotta end, I guess…

Monday morning found Scotty and I being lazy and grabbing a little extra shut-eye. And after a leisurely bite to eat, we headed back to the Portland Metro Area but – being on our own and “tourists” now – we took a jaunt up Highway 101 just for grins. Scott Weider had brought his Nikon “Big Gun” camera along (He’s an award-winning news photog by trade), and we were off to see “the sights.” Every time Scott’s been out here, we’ve taken a little side trip, wandering here and there – and this time was no different. So we drove up the coast a while, and we ended up at a place called “Point Meares” north of the town of Tillamook on the Pacific Coast. And I thought Scott was going to take a high-dive off one of our cliffs, he was so excited at seeing and shooting all this Northwest scenery… I’ve seen the results, and he got some superb photos, too. But then it was finally back into town for some shut-eye, and Scott’d catch a flight for Rhode Island first thing in the morning. My “chauffeur” duties of piloting Scott around were over – and frankly, I’m always a bit sad when that happens.

Okay – there’s always next year, though… See ya then!