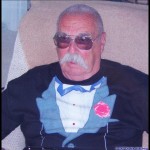 Chuck Johnson who passed away on May 31, 2007, was a good friend of kite fliers everywhere. But Chuck was mostly concerned with kite flying in the Pacific Northwest – and particularly around Ocean Shores, Washington. You see, Chuck had the un-official title of “The Old Man on the Beach” there in Ocean Shores, and he earned, and truly enjoyed, the title.

Last month I lost a true “friend”, as well as a fellow kite flying buddy. Chuck Johnson was a heck of a friend and kite flier. After retiring from his job he loved to hang out on the beach at Ocean Shores, WA and teach people about kite flying. He loved to talk about the history of kite flying in the area, as well as many of those old time kite fliers that were his friends. People like Jim and Monica Barber, Jerry and Marcia Cannon, “Burner Bob” Warner, Mike and Teri Huff, Bud and Lisa Root, Gordy Fry, and the Cimbureks to name just a few.

Chuck especially loved to fly dual and quad line kites, and he had many, many, kites in his collection. After flying with Chuck on the beach it was always a pure pleasure to follow him back to his wonderful home on the canal in Ocean Shores. Chuck and his wonderful wife, Ione, were always the perfect hosts as Chuck showed off his kite collection and knowledge of the kite flying hobby. Sometimes when the winds would die down on the beach, a bunch of us would follow Chuck back to his place and hang out with Chuck until the winds picked up again, then all of us would go back to the beach and fly some more.

Whenever my friend “Geezer” and I were in the area, we always made a point of stopping off to see Chuck and Ione if Chuck wasn’t out on the beach. We also loved to catch Chuck anytime there was a kite flying event anywhere near the Ocean Shores area. Chuck could always be found at those events unless he was having health issues. In the last few years of his life Chuck was limited by those health issues, and finally had to give up teaching others how to fly kites. It broke his heart to not be able to hang out all day on the beach giving away free lessons to anyone that wanted them. Even then Chuck would drive up and down the beach in his Jeep, and he would stop and talk to friends along the beach. He also loved to set in his Jeep and observe others flying their kites. He was always willing to give out tips and anything else he could to help people. Chuck was the type that would give you the shirt off of his back if he thought you needed it.

Chuck had a huge collection of dual and quad line kites, but I think his all time favorites were his Revolution “Tuxedo” series that were custom made for him. He loved to fly them and stack them as a set. I know he wore out a number of sails during the time he flew them. I just don’t remember how many sets total… LOL He loved to fly his kites, and his passing has left a large hole in many peoples hearts, and the Kiting world in general.

People pass through our life all of the time. Some leave behind no trace of their passing through, and then there are those that leave foot prints all over the place. Lucky for me Chuck had large feet. He is deeply missed by many of us. 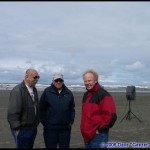 I first ran into Chuck about 15 years ago when I started going to the beach fairly regularly. Chuck had a 6-stack of Beatles he used to fly for the people right at the main entrance to the beach from downtown Ocean Shores. And, if there was wind, Chuck would be out there for a while in the mornings, and then for most of the afternoons – and especially on the weekends. Oh, he received a few dollars from a local kite shop to be there, but I’m certain that most of it was just for the pleasure of offering his help and his friendship to anyone and everyone. He’d be out there flying his Beatles, and folks would stop and chat… Yeah, he’d sell a few kites in the process, but he’d teach folks how to fly for free, too. Just look for that black Jeep pickup truck with Chuck’s wife, Ione, the little white-haired lady reading a book in the front seat, and the big old feller with the bristly mustache sitting out back on the tailgate, flying those Beatles. That would be Chuck…

After a while, I began going other places to fly, including kite festivals up and down the coast, so I kind of lost track of the big guy. Still, Chuck was always just an email away, and there’d be several times a year that we’d swap some piece of kiting trivia, or I’d end up being attracted to some of the odd-ball used kites that Chuck had for sale, mostly as a service to his friends. Yeah, there were lots of Bad Boys and Illusions, but some of them were pretty unique kites too – things like a rare Sky Burner Firebird or a Jeff Howard Imperial UL or a full set of three Diggles Hard Corps kites.

And I guess at about the same time, Chuck began to have some serious health problems. It turns out that his long battle with Emphysema was leaving Chuck with a significant shortness of breath, so he finally quit flying Dualies and went to quad-line kites instead. Next thing you know, he’s into custom Revolutions and he got to be a fairly decent quad-line pilot until a further decrease in his breathing capacity made even flying those kites difficult for Chuck. And about that time, we began hearing words like “oxygen bottle” and “Cardiologist” and “Clinic” and “Hospital” began to creep into Chuck’s casual conversation.

So, when Chuck got to the point where flying was difficult for him, Chuck and Ione would “hold court” at their home on Point Brown Road between 4:00 and 6:00 PM on weekends instead, and all of his friends were encouraged to stop by for a glass of his box jug-wine and some casual conversation. And while Chuck’s condition declined or maybe improved in waves over the months, those get togethers continued right up until it became evident that Chuck’s health was to the point where the end was coming, even if it wasn’t exactly in sight yet. So then those visits and the number of friends stopping in increased, if anything. Shucks, we couldn’t go to Ocean Shores without my stopping at least one afternoon and spending an hour or two talking kiting or other topics with Chuck and Ione and a handful of their friends (out of maybe two or three dozen kiting folks who would stop in whenever they could).

Yeah, we’ll all miss Chuck Johnson. He was a fairly big man, perhaps a little gruff occasionally, more than slightly opinionated, and with a personality that brooked no dissention – yet Chuck respected everyone he met at the same time. And in the final analysis, Chuck earned every bit of that title of “The Old Man on the Beach!”