As a person gets their very first quad kite, one of the very first lessons learned is how to deal with the four lines. If there is someone around who’s been down these twisted roads before available to the new flyer, they will usually adopt whatever the more experienced pilot is doing and simply go from there. And, depending on the method employed, and the care taken when winding and unwinding will determine how soon a person will run across their first big tangled mess, and mark my words, sooner or later, no matter what you do, you will. So with this article, I’ll talk about a few of the different approaches, and specifically what has worked very well for me lately.

One of the quickest ways to generate discussion on a quad line discussion is to ask people how they wind their lines up. There is a multitude of approaches towards this, but, it basically breaks down to three different methods, with a few variations. All the methods have their individual pluses and minuses and at the end of the day, it will really come down to whatever works best for you, as 99 times out of 100, it’s going to be you who will be unwinding the big mess (or a succession of smaller messes!) in order to rescue your line set.

First though, let’s look at a few basic things that will apply to any line set.

First things first, when you get your first line set, or a new one, make sure you check the length on all four lines. Minor amounts of variance between the individual lines is fine but, my definition of “minor” is a quarter of an inch. With commercially bought sets, sometimes they have been cut, and stretched well and they will match up nicely. If so, take them out, and go flying! But, sometimes the difference can be rather dramatic. 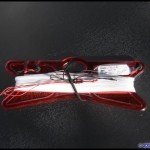 I talked with a person last weekend while in Westport, Washington and a recent set that he had bought sported one of the four lines being an entire three inches longer than the other three. If you have bought two dual line sets to combine into one quad set, the difference can easily be inches or more. Unless you have checked this beforehand, you may not notice this as you set the kite up, and then you can spend some unknown amount of time wondering why your kite is flying so oddly. So, ideally, any new set of lines you get should be stretched out and checked for a consistent length on all four lines. Simply set a stake down and and run the line set out to its full length and see what you end up with. Its also worth giving the lines a good stretching at this point, just to be sure they have reached their maximum length. And after a few flights on the new line set, go through this process again because any stretching that is going to occur will happen fairly quickly. 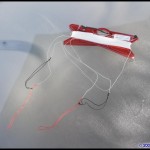 In a perfect world, new sets come with the four lines paired off nicely so you have a right/left set or, top/bottom set, and in some cases, this is colour coded to make it a little more obvious. My sets are all red leaders to the top, black leaders to the bottom.
When I used to make my own sets, I’d have all manner of odd colours of sleeving, and if the sleeving was all the same colour, I’d mark the sleeving with a sharpie pen, denoting which is which, ie, 1, 2, 3, 4, with individual stripes. One of the biggest keys to cutting down on quad setup time is to always pair your lines together when you wind the lines back up. I pair the individual sides together, and I also always tie the bottom line (using a basic larks head knot) to the top line. The idea here is that the more consistent you are about doing this, the easier it will be when you go to setup the next time. Now, lets get onto the three methods.

1] The Easy Road
Hands down, this is the simplest and most fool proof method of winding lines. However, its also the most time consuming, and as it eats into flying time, I have never used it and I’ve been known to snicker at those who do. Simply wind your left and right pairs onto separate winders and deal with each side one at a time. When winding though, avoid the temptation to figure eight this winding though in this particular case, it’s not as much of a potential issue.

2] The Euro Road
I first ran into this method of winding while I was in France last year at Berck Sur Mer though I have since found out that it’s a favorite of Mike Kory. Mike describes this approach very clearly in this thread from the Rev Forum.

In a nutshell, you do away with a winder altogether and simply wrap the lines on the handles, starting from the handles and moving back to the kite. While this sounds like a probably recipe for disaster, it actually works pretty well provided you are careful about tension while you are winding and unwinding. Also, be SURE to pair the pairs together properly. I tend to use this method if I quickly need to wind up and move a kite somewhere, ie at a large festival, moving between fields when I can’t simply fly over.

3] The Monkey Road
Ok, to be fair, while I have done it close to this way for many years, John has nudged me into a few adjustments to the method and I’ve been trying this for a couple of months now, and you know what? It simply works really well, 98% of the time. And, always bear this in mind, no method is perfect but, after using it consistently for 10 festivals this spring (yes, I’ve been THAT busy) I’m pleased to say I can only remember one time of having problems. The first step is to start down at the kite end of the lines.

As mentioned above, pair the left and right pairs together, however, larks head your TOP line onto the BOTTOM line, and right at the very start of the sleeving. The “why” on this becomes apparent in a couple of sentences, so, bear with me, and refer to the pictures. 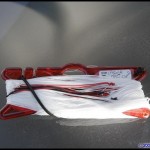 Once you have them paired off, hook the two extended bottom loops onto the winder. Start winding but, strongly resist the urge to “figure eight” this, simply wind them onto the winder straight. The reasoning behind this, and I’ve now backed it up with experience is that as you figure eight the lines, you’ll always get some of the winds being a little looser and this is what leads to weird oddball tangles, some of which clear easily, but, some of which do not.

By winding on straight, you dramatically reduce the odds of this happening, as long as you wind onto the winder tightly. Once you have wound the entire set back onto the lines, you have a choice to make, you can either remove the handles (once again, pairing left and right lines together, this time with BOTTOMS larks headed onto the TOP) or, you can simply leave the handles on. The reason I said to tie the TOP to the BOTTOM on the kite end, right at the bottom of the sleeving? It’s pulled the bottom of the handles forward and you can now just fold the handles against the winder and wrap the winders elastic around the metal part of the handles.

Now, next time when you go out, simply put a stake in, unwrap your handles, and voila, they are already at a good angle for being on a stake and with some luck, they will unwind so nicely that by the time you have them attached to the kite and walk back to your handles, you can probably give the lines a shake and be ready to fly!

Try it, it really works well.

And to wrap up, there’s a couple of events on the horizon you may also be interested in. Again this year at WSIKF, iQuad will be camped out on a section of beach, flying every single day and often at night. And once more, the goal will be a mega fly by the weekend, with the hope that we can top last year’s number of 18.

The current world record for a mega fly appears to be held by the Japanese with a staggering 43 kites in the air at once, but, I’m hoping we can at least get to 30 people. Optimistic? You bet, I usually am!

Also, this fall at the AKA Grand Nationals (held conveniently for me at Ocean Shores, Washington, we’ll be presenting two events, first up will be a quad team workshop, designed to give a group of people a really good understanding of care and maintenance of a quad team, with a look at calling, organization and some specific coordinated moves.

And after that, we’ll reprise last year’s Quadapalooza, which will then put some of what is learned into the workshop, up into the air. I’m hoping to see as many of you as possible at both of these events, so come on out with your 120 foot lines and a kite and let’s go!

Next issue, I currently have zero ideas on what to cover but, if you want to send some into me, feel free, at dh@monkey-boy.com . May the wind be at your back and your kite in the air!