It was the first time for me to go to Brookings. Can you imagine people coming to this festival that are non kite fliers, lining up their chairs early in the morning to make sure they all had good spots to enjoy the countless performances that take place each day of the Southern Oregon Kite Festival. I had the chance to talk to many of the spectators in attendance and amazingly, I found there were a surprising number of people who had their vacations planned around this very festival, many of them returning year after year. This was the 15th annual SOKF, and thanks to dedicated locals and visiting spectators, still one of the finest festivals in the country. 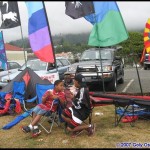 Driving in on Friday afternoon, we went straight to the flying field to test out the fields for team flying with iQuad over coming the weekend. It was one of the smaller fields that I’ve flown on but by Saturday morning I understood, this was going to work out just fine… It was great opportunity to sit back and enjoy the shows put on by all the other flyers. Most of the time when we attend a kite festival there’s room for “free flying” and as a result, it’s non stop flying for us with no time to really stop and take it all in. At the SOKF, flying space is at a premium, full utilized by the ongoing demonstrations and activities held throughout the day… We were happy to enjoy many great flyers including The Bay Area Sundowners, Bazzer Poulter, Ron Gibian, David and Susan Gomberg, Penny Lingenfelter, and a bit of flying from our own iQuad, just to mention a few, although there were many more worthy of note.

The Friday evening we were invited to join the organizers and other invited pilots at the Driftwood RV Park, warmly greeted and treated to a great BBQ complete with fresh local Salmon and more food than you could shake an SLE at… I have to say, the Salmon was some of the best I’ve ever had. WOW!!! A big thanks to grill master Roger Thompson for keeping the good chow coming. We got to meet some new and old friends alike, learning and finding out about how their flying season was going.

Saturday morning we woke up and opened the door of our hotel room, and WHAT ?!?! Grey skies and Rain. Well THEY called it rain, but me, coming from Victoria, BC (Canada), I saw their rain more like thick fog with mist… In my area of the west coast, we’re known for heavy rain. But one thing that was okay was the wind. Hearing all these stories from past years of wind being little to none, I was pleased to find enough for us to easily fly in all weekend, yes indeed, it was game on. 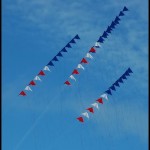 Some of the kite performances that really made an impact on me? First of all, the amazing Bay Area Sundowners! With their stacks of Hyperkites, red/white/blue, with long tails. Those kites stacks are so large and take up so much sky, it was so visually impressive. As they do every year, Sundowner members Gordon and Ken Osterlund, Barry Nash and Randy Tom got the crowds cheering madly every time out. 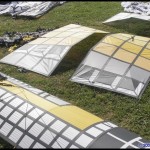 Other demos I really enjoyed were the individual demos from Bazzer and Gibian. They put up some of their work up in the air with the help of other flyers and spectators. Their designs and the amount of work they put into their kites is so amazing. After fickle winds in years past, Rod and Cindy Thrall finally had enough wind to get their family of giant teddy bears up for a spell, and the Gombergs pleased the crowd with two of their giant Bols and other assorted mid-size inflatables.

Returning for another year at SOKF, Arnold Stellema was our dutiful announcer. Man, I have to say he was absolutely the best man for the job. He not only makes an event even more exciting to watch for spectators, but he has a wonderful way of presenting each flier and group, plus he was so entertaining and full of kite knowledge. First and foremost, he has a really tremendous ability to give the fliers doing the demo a great deal of positive energy which they use to fly great demos.

Penny put on her ever-popular Cat in the Hat routine, complete with Green Eggs and Ham… More than once, we heard it referred to as the “Musical Seusical”… Always a great crowd pleasure. Penny has a knack for getting the spectators involved in all her demos. I was fortunate enough to be involved with one myself… Well, I thought it would be fun to borrow an electric bike/scooter and with my Blue hair and Red shirt (marking me as Thing 2), I motored around at top speed (1-2 mph), weaving in and out of the crowds, doing my best to make their time at this years SOKF memorable. More than once, I almost wiped out on the slippery grass, making it just that much more fun for the audience as they’d giggle at my skidding about. 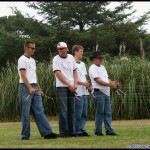 Team iQuad was also present, with the following flyers in the line up, John Barresi from Portland OR, Steve de Rooy from Victoria, BC Canada, David Hathaway from Vancouver, BC, Canada, and our most southern team member and closest flier to the SOKF, JD Fabich from Rogue River, OR. I have to say, flying at this event, the energy output of all the spectators, just made it that much more easier to put on a great demo. iQuad flew two demos per day, with a Revolution mega fly at the end of the both days, where other attending Rev pilots would join in the fray and fill the sky with a serpentine trail of quad line kites. At the high point of the mega fly on Sunday, we had a grand total of 11 Revs all flying in formation. What a great time that was, what was so impressive was the ability to put all those Rev flyers all on 120 foot lines in such a small field… A whopping 130 ft by 300 feet long, with people and flyers all lined up right on the edge of the field. Close quarters but still safe, and man, it was so much fun !!!

The other demos I really enjoyed watching were the youngest and most energetic sport kite fliers of the weekend, Aaron Washington and Nathan Ostovar both attending this festival for a few years now… They put on awesome demos, choosing some great music to go along with them. It was great to see all the energy they produced while flying, highly contagious and showing just how much fun kite flying really is. Thank you Nathan and Aaron! 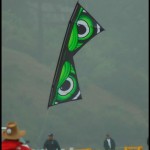 I have to say this was one of the best organized kite festivals I’ve been to in my 23 years! The flyers were so well taken care of with food each day, BBQs, and a killer banquet (complete with cash bar and a great auction). I would very much like to take this opportunity to thank our primary SOKF organizers, the Freemans of Freeman Rock, the Thompsons from Driftwood RV, and of course, everyone else who played a hand in organizing and running this incredible event… Thank you, thank you…

I’ll be back if I have anything to say about it!