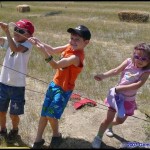 Many years ago, in what often seems like another lifetime, I spent quite a few years playing in a band that’d blast back and forth across Canada, usually in a smallish van, packed to the rafters with music gear. Out of all of our many and varied destinations, there was one particular place we liked to visit was the province of Saskatchewan. We never failed to have great shows there but, more importantly, the people were simply great to be around. Some of my fondest show memories occurred in either Regina or Saskatoon but, I hadn’t actually made it back to the area until just this past may, when Shann Gowan invited iQuad to come and invade their third annual Windscape Kite Festival, held in Swift Current, population roughly 15,000. In an odd twist of fate, this became the first festival in what was a “Canadian Tour” for iQuad, and, I can’t think of a better place to start one.

After collecting the motley crew that we are in my monkey castle in Vancouver, we all headed off to the airport to fly across the mountains into Regina. After having done nearly all of my last few years of air travel either into or through the US, it was almost odd to travel only within Canada on this trip. While the security checking is still reasonably thorough, you can leave your shoes on. We were met in Regina by Shann’s parents, who then took us out onto the open prairie road to get us to the town of Swift Current, where the Windscape festival was being held. We had also picked up Dave Gomberg as well, traveling surprisingly light with a mere two bags of kites!

After a nice scenic drive through the wheat fields (if you have never been out on the prairies, you’ll be struck with just how flat it really is and just how straight all the highways are!) we arrived at the field where the festival is held and the very first thing you notice is the spectacular view you get smallish hill we were located on. Talk about a BIG sky! So, we did what we felt was best and got out the kites! A music festival is also held in conjunction with the kite festival and the music tent was right beside the field, so we spent a few hours simply flying to live music as darkness settled onto the field. While the wind was light and the mosquitoes plentiful, we had a lot of bug spray, and inevitably, a great time flying that got us all warmed up for the next two days of flying. 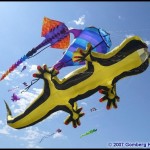 For myself, being a kite flyer in Canada means I tend to only really see people local to my area. I hear about lots of other people flying all over the country, but, in terms of “the big picture”, I don’t tend to run into them very often with the vast mileage between major cities, so its was really nice to finally meet some of the other people who fly kites in this huge country, including flyers from Alberta, Saskatchewan, Manitoba and Ontario. Saturday morning arrived and it was simply a beautiful day from start to finish. While people had warned us in advance of the howling, weird winds that the prairies are capable of at times, it didn’t prove to be unmanageable for iQuad nor anyone else. Strong, sure but, not overly so. 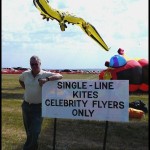 All kinds of kites were represented well, from Gomberg’s huge inflatable kites to some very pretty hand made Indian fighter kites, and nearly everything else in between, including some great buggy demonstrations and a tremendously amusing traction kite with an attached smoke system! We were also treated to some of Dick and Georgina’s wonderful single line kites from Washington, and Dick’s also spectacular wardrobe. Also, for the wee kids in attendance, there were various shows under the tent, some kids kite making, kids activity area and and a kite hospital for dealing with broken kites! 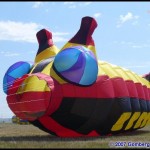 One rather innovative idea we saw at this festival that we hadn’t run into before was a kite program that kids were encouraged to get autographs in, ie, from the specific flyers mentioned within. If they collected specific numbers of autographs, they could then trade these towards various things available at the kite festival, such as kites and popcorn. A very innovative way for the public to spend some time with the flyers at an event! If the kids had any energy left after all this fun, they could be worn out with some bol racing all day as well.

In the evening, iQuad elected to fly the night away again to live music, this time to Vancouver’s own 11 piece funk band, Five Alarm Funk. The wind was a little heavier in the evening so we managed to get six lights onto each kite and flew until about midnight, to the delight of the crowds who were there for the show. You’ve probably never seen a night sky like the prairies when there are no “large” towns nearby. All in all? A really fine first day to the festival!

Alas, the weather was a little off the next day. While it didn’t rain all day long, it sprinkled off and on. But, as is typical at kite festivals, it merely dampened some ripstop and not the spirits of those who came to the festival. But, one odd thing we noticed, the ground of the field is made up of a fairly fine clay, which when it becomes VERY sticky to shoes. We’d walk out onto the field to fly and within 10 steps, you were about 2 inches taller from the mud that would accumulate on your feet. It was fairly amusing at first but the stuff is a real bear to actually get off of your shoes once it’s stuck on. 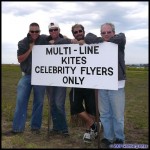 Gradually as the day wore on, the weather did actually get to be quite a bit better and a full slate of demos were seen by the brave souls who did venture out to the festival. The festival wrapped up that evening with a really fun pizza party back at the motel we were all parked in. We watched some videos and a bunch of pictures taken at the festival and just relaxed from what was a pretty entertaining weekend. I can’t wait to return to this event next year and I’d highly recommend it to anyone who can make the trek up there, you’ll be entertained all weekend long and see some really beautiful sections of the Canadian prairies.

Thanks again to the Gowans and the festival in general for having us there!