For years now, people have been referring to Berkeley, California’s annual kite festival as “Berserkeley”, insinuating crazy winds, at all times. Yet, with this second trip to the festival, I have yet to see it for myself! Held during the last weekend of July by Highline Kites, at Cesar E. Chavez Park, the event simply gets bigger and better every year.

This year, I went as part of iQuad and we’d set aside Friday as being a practice day down on the field. I flew in Thursday night, and as a note to car rental agencies, when you say “rent a mustang (or equivalent)”, call me fussy but, a Ford Fusion is similar in that it has the word Ford in the title and nothing else. But, I survived that fiasco and we had a superb time flying on Friday. All around us, pieces of the festival were coming together, about as quickly as our flying was! The weather reports for the weekend looked good and the winds weren’t howling but, certainly enough for vented Revs. A nice warmup to the weekend, which we wrapped up with an excellent feast of all you can eat Chinese buffet.

Saturday morning arrived (apparently a little too early for some people) and while it was a little foggy and cool out in the morning, the forecast predicted it’d clear up for a nice sunny afternoon. The Berkeley festival is also home to one of BASKL’s competitions, The West Coast Stunt Kite Championships, so the morning got an early start after the pilot’s meeting with some of the Precision events talking place in the main field. Also up on Saturday morning was Hot Tricks and after a good battle was put in by the people who competed, John Barresi emerged victorious, even throwing in a little dog staking on a Rev to clinch the win.

One of the great things about the Berkeley festival is all the events going on around the whole park. In one corner, we had Ray Bethel piloting his three Kestrels to the delight of crowds as they walked onto the field. Just a little further into the park, both Revolution and Prism had fields setup where they were teaching people how to fly kites and demonstrating some of their new designs, ie, Prism’s new Zephyr was finally available for purchase and Revolution was sporting their new Race Rods and a few beautiful Masterpiece series Revs.

A little further up into the fields, The Berkeley Kite Wranglers had setup shop, filling the skies with octopi galore! This year saw a total of 12 in the air at once, which might be a North American record and my personal favorite of all of them had to be the white with flames one that was up both days. Truly a beautiful creation by Peter Lynn and one of a kind as well. I’m hoping we’ll start to see some more customized octopi hanging in the skies.

In a field just above the Wranglers, a kite team from Hammatsu, Japan had set up, complete with many beautiful Edo kites and a large Taiko group. Both days, the sounds of Taiko drumming were heard all over the park but, on Sunday, they did an extended demonstration on the main field, while one of the Rok battles was going on. Talk about inspirational background music!

Arnold Stellma again organized a weekend’s worth of Rok battles with his quiver of Roks. Most of these were for the crowds who had come down but, Sunday’s battle featured a hard fought scrap made up of various flyers that were there for the event. It became a fairly long affair but, in the end, Mark Lummas of Too Much Fun triumphed over me, representing what was left of iQuad. I remain convinced it was Mark’s long gangly legs that gave him an unfair advantage but, I’ll take a second any time and, while it was a little tiring scrambling around the field, it WAS a lot of fun. Its always amusing to watch all the flyers start mentally noting just where Dave Gomberg is hiding so they can gang up on him but, I found it to be a more successful strategy to simply let everyone else head over there while I hung back and waited for the brawl to die down a little bit. Next year, the championship shall be MINE!

Amidst everything else that was happening, various people put on a wide variety of demos on the main field for the crowds, including iQuad, Too Much Fun, Berkeley’s own Airzone and a good handful of individual flyers as well. The crowds loved all of it and ringed the field nicely for everything that went on, whether it was demos, the ongoing competition or the ever popular kid’s candy drops that were put on throughout both days.

While much of the attention with respect to competition was on the main field with the dual and multiline events, the BASKL club is also well known for having a very strong group of fighter kite competitors as well and they held an all day event Sunday. Featuring some great flying by all who competed in this, Felix Durairaj ended up being winning both events, the line touch and skills portions. Nice work, Felix!

Much like Saturday, Sunday’s weather was just as nice. Again, a little cloudy in the morning but, burning off into a nice sunny afternoon by the time lunch rolled around, and decidedly non vented kite weather. People filled the park once more for a full day of 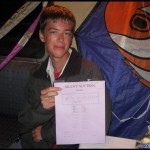 activities, including the wrap up of the sport kite comps. Also, iQuad and Too Much Fun combined forces for a great megafly towards the later part of the afternoon. By the time the end of the day had rolled around, the park was littered with very tired kite flyers and a very entertained crowd that was starting to wander back from wherever they had come from.

That left only one thing left to do for this festival, the dinner cruise around the harbour, with its silent raffle. One lucky person won JD Fabich but, at this point, it’s unknown just what they intend to do with JD….Maybe we’ll find out next year!