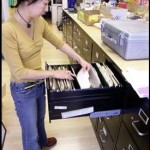 In addition to the hundreds of kites, tools, photos, and books in its collection, the Drachen Foundation’s archive also includes what is known at the Study Center as “the black files.” Contained in 21 three-drawer filing cabinets are thousands of documents, photographs, newspaper clippings and letters. Two of the gems contained here are the files of Ed Grauel and the correspondence files of Margaret Greger.

A former schoolteacher, Greger has taught thousands of children the how to make kites and is one of the pillars of kiting education. Her best-known books Blown Sky High, Kites for Everyone and More Kites For Everyone were written and self-published by Greger, whose desire was to bring her years of kite plans and experience to other educators and all interested in kites. Her aesthetic was to provide plans that were simple to build, took less than an hour to put together, and were inexpensive to produce. These plans were extremely influential to kite makers at the time, and many can claim that one of the first kites they themselves constructed was a Greger. 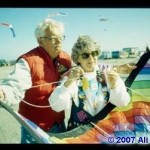 In addition to Greger’s influential kite plans, she was also valuable as an international networker. At the time that Greger was learning about and teaching kites—as the American Kitefliers Association was just getting started—information, ideas, and innovations were passed back and forth throughout the kiting community through the mail. Greger was especially prolific in here correspondence, and as she explored her kiting ideas with the likes Bob Ingraham, Dave Checkley, Stormy Weathers, and many others, she kept detailed copies of each interaction, carefully filing all correspondence and her carbon copy replies. “Margaret is amazingly articulate,” explains Drachen director Ali Fujino, “her letters are more like little essays full of substantive text and ideas.” 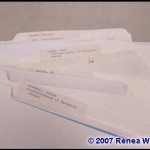 Several years ago, Greger happened to mention to Ali Fujino that she was preparing to get rid of these files. Convinced of their obvious value, Fujino persuaded Greger to place them in a box and mail them to Drachen instead. Shortly later, three perfectly packed and organized boxes arrived at Drachen’s Study Center. “Receiving something like this is an archivist’s dream,” comments Fujino, “these are the things that you base written history on.” 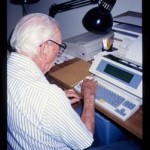 Another exhaustive resource in Drachen’s black files are the writings, correspondence and patent archives of researcher Ed Grauel. Methodical and thorough in his approach, Grauel spent 40 years of his retirement researching, designing, building, collecting, and writing about kites. Most notably, he was an authority on U.S. kite patents. Very probably no one—not even the U.S. patent office—has had as much knowledge of American kite patents. Grauel freely shared his research, self-publishing his findings in the ‘journal’ American Kite Patents, and updated those interested yearly with his new findings. Grauel’s patent archive has been an invaluable resource for the Drachen Foundation and anyone wishing to research a particular patent.

As Grauel commented years earlier, “Apart from my work with patents, I want to be known as the guy who tried to get research into kiting. My research has been significant. It has worked for me, it has worked for a lot of other people.”

Upon Grauel’s death in 2002, his family donated Grauel’s archive, correspondence, and kite material to Drachen, including his old Canon word processor and printer on which all of his research papers were written. Sadly, no one has kept Grauel’s patent work up to date, and this remains a job for the future kiting generation that Grauel and Greger have left their knowledge.

The Drachen Foundation is very pleased to house both of these collections. These papers contain years of not only Greger’s and Graul’s thorough research and knowledge about kiting and kite making, but all those they were in contact with—a legacy of information gathered and analyzed over decades, and something to be treasured by the kiting world much longer.