Once upon a time, in the city of Milwaukee, there was a man that was called The Kite Man. He was usually seen down at Veterans Park, sown by the lake shore. He flew kites, made kites, and taught others how to fly kites, It’s the Kite Man’s real name, Frank Mots, that the Frank Mots Kite Festival is named after . Organized by the Gift Of Wings kite store, and helped by a long list of sponsors, 2007 marked the 29th year that the festival has been held. 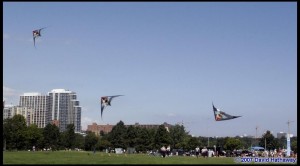 I’ve never been to Wisconsin before, so, being invited to go as part of iQuad was a great reason to experience the state first hand. The Canadian half of iQuad all arrived on the same flight out of Seattle, and we headed straight for Veterans Park from the airport, just to see if we could get a little flying in before John arrived and the sun went down. The park itself is a beautiful place on the lake with a great view of the downtown area, and of the Milwaukee Art Museum, located a little further south of the park.

While the winds were up and down, and coming from off the city, it was flyable and a nice way to unwind after a flight across the country. One thing that amused the three of us (we’re either from Vancouver or Victoria) was the sheer stupendous size of the dragon flies and the large numbers of them. Up here, I might see 4 or 5 in an entire summer, and they are a good bit smaller. Every once in a while, one would blunder into one of our lines and you could feel the impact.

After a long dinner at Buca’s ( a fantastic Italian place near where we stayed ), Saturday morning came around all too quickly. Scott Fisher from Gift of Wings had arranged for one of the local TV stations to come down to do some filming for their morning weather forecasts, so, we found ourselves out on the field at a sprightly 7am in the morning. Unfortunately, it was rather tough finding any wind at all to fly in, and on top of that, somehow managing to keep the morning dew off of the lines, but, we managed to get them a little good footage at least. If we’d flown much longer, we would have found ourselves IN Lake Michigan and I’m willing to bet it’d be pretty cold at that time of the morning.

As the morning continued on, kiters began arriving at the field, setting up tents, cabanas and a huge array of kites. Dan Brinnehl got an early start on some KAP photography, meandering his way over to the Art Museum to capture some truly amazing pictures of a decidedly different looking building. The IKE Kite Club which is just over a year old now was also beginning to arrive, immediately noticeable with their bright red t shirts. We’d also drafted Mike Kory from IKE to fly with us, given he’s one of iQuad’s alternates and the writer of a guide to quad team flying. And, to bring it up to an even number, we’d also invited Zach Gordon of Chicago Fire to fly with us, to give us a nice 6 member team. Of course, the rest of Chicago Fire was there as well and I think it’s fair to say that just about every kite flyer in the general area of Illinois and Wisconsin was down at the park on at least one of the days.

While the weather was fantastic, the winds were a little iffy during the day, coming in from the city. Not exactly ideal winds in that park, but, everyone there made the best of it. Dave Busch (as Mr. Incredible) managed to get his Thor up and in my eyes, Yves LaForest took the prize for best ingenuity under trying circumstances by hooking various large kites that he had with him up to a golf cart and pulling them across the field. Maybe not the best display of a Octopus, however, the large crowd that had settled in for the day (lawn chairs, coolers and all) sure appreciated the effort that was put in by everyone who flew and organized the event. After a fun pizza party by the Gift of Wings kite shop, most of us then headed up (down? I get so confused in new states) to Mike Delfar’s home for an evening of videos, video games, general chatter and some great food to nibble on. Thanks for that, Mike!

Thankfully, there was no need to be up at the crack of dawn on Sunday morning, we were much more leisurely about getting down there. Again, it was a beautiful day and while the wind started light, it was coming mostly from the water this time and thus, much more reliable. Yves was able to get his big kites up without the aid of the golf cart and I’m sure Jim Cosca and Brett (sorry – don’t have a last name) had a much easier time teaching people to fly either dual or quad line kites. It was another full slate of demos, both by individuals, pairs and teams. Also, Scott had arranged for a few specific kids events as well, including one contest to see how high a kid could get a single line delta into the air, in a specific amount of time.

Zach Gordon spent much of the weekend running around doing either individual routines, quad pairs with Eric Wolff, or flying team demos with both Chicago Fire and iQuad. It’s a good thing he’s still young because many of us would have had a tough time keeping up the pace he did all weekend.

One of many things I noticed that this festival did “right” was how they handled announcing for entire weekend. Splitting off mic duties between Scott Fisher and Ann Vondriska Brinnehl worked very smoothly but, the sound booth also made liberal use of some prerecorded segments. When it became time to announce the sponsors, they had a few different versions of the “pitch” that made sure all sponsors got properly mentioned. Also, many of the teams and individuals prerecorded “introduction” segments that were played as they flyers were preparing to start their routines. While I suspect on the surface, this may sound a little cheesey, but, it worked well with the crowds and gave the whole event a larger feel for the spectators. A tip of my large black hat to the sound crew and announcers, it was one of the better run festivals I have been to in that respect.

Towards the end of the afternoon (but, before the Canadians had to dash off for an airplane) we managed to put together a 16 kite rev megafly with very few traffic jams or spectacular crashes. And vast amounts of those flyers were proudly wearing their IKE shorts as well. Overall, it was a great weekend, with some really nice weather and some pretty large crowds. I’ll definitely make a return trip to this festival again next year. Thanks again to everyone involved!