Well, unfortunately, it had to happen sooner or later this week, the day was for the most part, rained out. Pouring rain in the morning and it hasn’t let up at all as I sit here at 4:30pm, getting an early start on the daily updates. The idea is it will save me from trying to coherently write much of it at 1:00AM in the morning when I am quickly falling asleep. (special thanks to John for his own late hours on photos and layout, while still managing to make some sense of of my writing throughout the week).

One of the near casualties of the rain was Jim Barber’s team workshop, however, this was convened indoors so, it managed to go off regardless. But, as John and I were sitting in the Shilo restaurant having breakfast, it occurred to us that we could do some iQuad flying directly outside of the restaurant windows, there was JUST enough room for 120 foot lines. 10 minutes later and a lot of rain gear and away we went, putting on a mini quad party just outside. It’s a kite festival, you need kites, rain or shine. That, and we’re just kinda silly that way. We managed to get in a good 2-3 hours before we finally ran out of steam.

Some of the other workshops taking place today was one on handling the big monster kites, with the Gombergs and Al Sparling. Particularly appropriate given yesterday’s new record for an Octopile down on the sands. People also congregated at the “Mini AKA Banner” workshop, “Judging Handmade Kites : After the Competition” and Barry Poulter’s look at how to make a cascading bridle. Dean Jordan continued on with his look at Traction Kiting and I think that was the last work for the 2007 AKA Convention. Overall, attendance at all the workshops looked to be pretty good. Any of the presenters I’d talked to expressed their thanks and gratitude to the people who made it out to them.

Another near casualty of the weather was going to be Hot Tricks, as few people seemed to have an interest in running it outside in howling rain and wind. But, some last minute ingenuity (isn’t this what kite flyers are renowned for anyways?), it was decided we could have an INDOOR hot tricks shootout instead, which was done in the fairly small lobby area of the convention center. I know I’ve never flown in such a small confined area, but it was a great challenge for the 8 flyers who stepped up to the plate. In the end, there was only two standing, Tristan Underwood and myself. And, much as I expected, Tristan cleaned my clock quite handily but, given that second place was the sole trophy I am taking back this year, I’m pretty cool with that. Tristan truly owned the entire competition as his arsenal of indoor tricks is nearly as full as his outdoor tricks. Hot stuff indeed!

We wandered over to the setup for the “People’s Choice” award, as makers quickly filled up the main convention hall. Below we have included pictures of some of these and the Sport Kite competition results as well.

Well, while the banquet and awards ceremony was a lot of fun, I’m sad to report that no Rok battles were fought within the convention center that we notice. The convention center was beautifully laid out with all of the kites entered in the Member’s Choice award, barely leaving any empty space whatsoever on the walls. A great dinner was had and after that, it was onto the awards.

Overall, at least from my perspective, I think it was a great Nationals competition. We managed to avoid some dreadful weather that was in the forecast nearly all week, and we managed to have a lot of fun at all of the events. 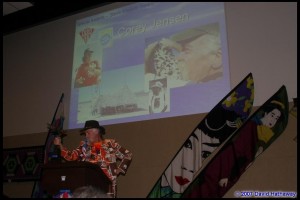 While there were times that we missed the hotel complex we had in Des Moines, due to its great central area, the Shilo worked out well and they were very tolerant of some of the shenanigans that manage to accompany an event this size with so many kite flyers. A tip of the hat to everyone who made this event happen and I suspect we will see many of you in Gettysburg, Pennsylvania for the 31st edition of the AKA Convention.