People ask me all the time how I got in to kite flying. The answer is that I never really got out. I flew kites as a kid and I was fortunate that none of the grownups wanted anything to do with it. Kites were paper or plastic, mostly they were diamond-shape, and they were sold in drug stores in March and April because that was kite season. And that was pretty much all there was to know about kite flying.

Because they were diamonds, there was a lot of experimentation with bowing, both of the Spreader and the Spine, just to see what it would do. Bridles were on kites for experimentation. Of course, in those days, kites had to have tails, just ask anybody. Those were fun to experiment with too. 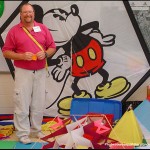 I was well in to my thirties when I wandered in to my first kite store. Wow! Box kites with wings! What a terrific idea! They would fly in less wind! Why hadn’t I thought of that? Hey, these kites over here have two bridles on them? Why is that? You can steer them? No! Really?

Well, it was all downhill from there. Some people are thrifty, but I am cheap. I didn’t buy any kites that day. I bought a book, David Pelham’s Penguin Book of Kites. I built several single-line kites from that book, but those two-bridle kites were always in the background, lurking.

One day I got bit by the bug and made a diamond-shaped two-bridle kite adapted from a design in Pelham’s book. It was made from Tyvek and Elmer’s glue and wooden dowels. Then Maggie and I took it out to fly and made very mistake that brand new dual-line flyers make. Hands over the head, short lines, small field surrounded by trees. But I was sure that if Maggie would just hold the kite right, all our problems would be solved.

Well, we lived thru it. I graduated to store-bought Trlby’s. Again, it was time to make every mistake possible. There was a lot of time spent trying to yank them in to the air from having them lying flat on the ground. It was a long time before I happened upon other flyers who were smart enough to stake their lines and let the strings hold the kites in launch position. Gosh, that sure made things easier.

The point I am trying to make is we all started in the same place. People often look at someone who has been around kiting for 20 years and think they will never be able to fly like they do. We all started the same way and faced the same obstacles. Some of us are just too stubborn or too stupid to quit.

There are a lot of people out there who think I am exclusively a Sport Kite Flyer. My friends in Sport Kiting will be very surprised to hear that. My Sport Kite friends keep saying that they will eventually join me in my chair over on the Single Line side of things. I do compete in Open Team Train. I started out in dual-lines by flying stacks, and I love them to this day. Folks will walk right by someone who is flying a top-end delta stunter and doing every trick in the book to look at somebody flying a stack. Then they ask the stack flyer why that person flying the little kite is having so much trouble. That is not to say that either is better than the other. I just love stacks. 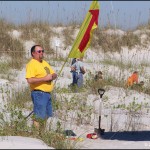 Field Staff at most kite competitions is often overlooked and under-valued. Many people, even competitors, don’t realize that the schedule is organized the way it is in order to use people to judge without interfering too much with their ability to compete in their disciplines.

I started Field Directing in 1991 and still love to do it whenever needed. I only compete in one event, so it is easy for a Chief Judge to slot me in wherever they need me. In an absolutely perfect world, all judges and Field Directors and Pit Bosses would be non-competitors. Then the schedule could be organized strictly around the disciplines and the competitors and things would go a lot faster.

Yes, there is a school of thought that says non-competitors are not good judges. Well, um, there are some long-time competitors who are not good judges. It doesn’t stop a Chief Judge from using them when they have to. Everyone wants to be judged by the most informed, least biased, most attentive judges available. Often times, the best way to make that happen is to offer to be one of those judges.

I am already thinking ahead to the Nationals at the Gettysburg Convention. I am committed to that competition being the best Nationals the AKA has seen in a while. Part of that is to have as much field staff on board as possible, as early as possible. Let’s all start encouraging people to be there and to volunteer to be field staff. Everybody who has ever thought of possibly judging, or felt they had inadequate judges at their last competition, offer to Shadow Judge at least one event at their next competition. Let’s start growing as many judges as we can so we get to the point that we have more than we need.

Now go fly something. See you out there somewhere.