September in San Francisco boasts steady southwesterly winds. The Festival’s location on the City’s waterfront Marina Green, took advantage of both the panoramic backdrop of the Golden Gate Bridge and the breezes that funnel through the Gate. Big Boat Series, the premier West Coast sailing regatta was happening at the St. Francis Yacht Club the same weekend. Kites and sails filled the skies and seas of the San Francisco Bay.

David Gomberg staked his ground on the westernmost end of the Marina Green. The winds came up early on Saturday morning breathing life into a Teddy Bear, Caterpillar, and Manta Ray. Brian Champie added his Gecko to the mix and Dean Jordan contributed Fugu to create a veritable menagerie of Peter Lynn kites. Jose Sainz set up camp nearby and gave flight to his Catalin kites and his Aztec and Mayan-inspired dragon kites. Ron Gibian was also in attendance showcasing his latest kite series. Reminiscent of Mondrian, Ron’s archirhythm kites take their inspiration from the architectural lines of the Chicago skyline and on Sunday they lent their beauty to the San Francisco one.

While the western end of the Green was the domain of the professionals, the eastern end of the Green was host to amateur kite fliers of all ages. At the KRON 4-sponsored Make-A-Kite Pavilion, kids made paper kites that they let fly in the Kids Fly Zone. Children as young as one were spotted clutching spools of string, flying their kites from strollers or perched atop their parents’ shoulders. Saul Griffith, aided by Peter Lynn Jr., added to the making of wind-powered amusements. They helped kids construct pinwheels using cartoon instructions from Saul’s newly released book Howtoons. The Howtoons booth created a quite a ground display with its garden of pinwheels whirling in the breeze.

The three center fields of the Green were the stage for a rotating lineup of kite performers. Troy Gunn did quad line and stunt kite demos, and when not on the mike or rounding up performers, Chris Shultz found time to put up a stunt kite train and fly several of his single line kites, including his Spirit Man Kite and Giant Martin Lester Legs. The two joined forces for a Team TKO sport kite demonstration. David Sabilino, Slawek Krauze, and Christoph Riddle wowed the crowd with their kite buggy tricks and artistry. Brian Champie set his Giant Spinning Crown a-whirl, and Jose Sainz presented his prize-winning New Zealand Star. Rakesh Bahadur delighted children with his Catch-A-Tail contest. One determined boy, aided by a walker, doggedly chased the tail around the field, and when at last he caught the tail, beamed from his well-earned victory. 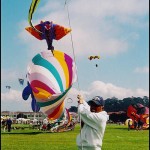 Thanks to the Festival’s waterfront location, the kiting was not limited to land. On Saturday, Dean Jordan and Dave Culp of KiteShip staged a demonstration of traction kites designed to increase the fuel efficiency of cargo ships. KiteShip’s 3,000 square foot traction kite pulled a 140-ton, 65-foot commercial barge, setting a record for the largest ship ever pulled by a kite in US waters.

On Sunday, two crews from Makani Power buzzed their 30-foot and 20-foot kite boats through the fleets of racing yachts. The kite boats, which have clocked speeds up to 28 knots and distances up to 100 miles, perplexed many of the yachting spectators who were unfamiliar with these mastless, wind-powered wonders. Kite-surfing and kite-boating pioneer (and Makani Power co-founder) Don Montague piloted one of the boats and Squid Labs and Makani Power co-founder Saul Griffith skippered the other.

A panel of judges that included Troy Gunn, Chris Shultz, and Peter Lynn Jr. chose the winners of the eight contests. Former AKA President Susan Skinner took home the prize for Smallest Kite with her miniature Handmaid Diamond. Mike Hagen’s Marilyn Monroe tantalized the crowd with her billowing skirt that revealed lace panties and was appropriately crowned Most Beautiful. (Diamonds Are a Girl’s Best Friend is the official name for this 10-foot wide, three stick diamond kite). Mike Hagen also nabbed the prize for Most Innovative with EO, a 2-foot wide foldable cellular E06.

Rhonda Davidson’s Blue Genie, a 7-foot wide single-surface cobra kite, put smiles on the faces in the crowd and earned the title of Funniest Kite. Blake Pelton captured the Biggest Kite category with Neptune, a 40-foot long inflated parafoil. Kite buggier extraordinaire David Sabilino did not disappoint in his contest performance either, winning Best Ground Display for The Menagerie, an assortment of feather banners and Wayne Knott kites. The well-represented Department of Tethered Aviation won both Longest Tail and Best of Show with Red Line. This 20-foot wide inflated flowform kite literally stopped traffic on Marina Boulevard when its 670-foot tail stretched across the sky, extending the entire length of the Marina Green and then some. (And for the record, with the additional extensions zipped in, the Red Line can extend up to a quarter of a mile). Thanks to Chris Shultiz, contest winners received kites courtesy of New Tech Kites. 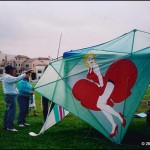 Troy Gunn, Chris Shultz, Dean Jordan, Dave Culp, David Gomberg, and Saul Griffith were instrumental in the success of this year’s Festival. Festival Founder Ron Young and I are grateful for their expert guidance and support and look forward to the assemblage of kite fliers and families at Family Day Kite Festival 2008.

We look forward to seeing you next year at Marina Green!