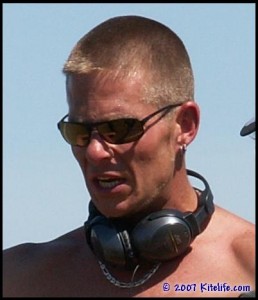 As Kitelife prepares for its 11th year in publication with 2008 right around the corner, we’re looking forward to yet another decade of serving the general kiting community… When the e-zine was created in June of 1998, the late Mike Gillard (our founder) very much wanted to fill the vacuum left by great publications like Kite Lines, Stunt Kite Quarterly and American Kite Magazine, all of which went out of print between 1993 and 1998.

Since then, we’ve been fortunate enough to have featured some of the most knowledgeable and noteworthy contributors kiting has had to offer while still keeping a grassroots approach, providing a venue for articles from new fliers with a fresh point of view… At last count, we have approximately 293 subscribers and over a dozen loyal sponsors, including Cutting Edge and Into the Wind, who have been with us through thick and thin since the very beginning. Without the support of our advertisers and subscribers, Kitelife would not be what it is today and I’m extremely grateful for their belief in what we’re doing for the kite community.

Since I took over the business in the Fall of 2002, we’ve significantly expanded our content by archiving some of the same out of print publications we were trying to replace with the e-zine, as well as accumulating an extensive archive (1987 to present) of sport kite competition and demonstration videos… We also added an on line discussion forum and a members area with exclusive video and photo content, as well as introducing our monthly prize drawings.

In addition, Kitelife has also become regularly involved with web design and consultation for a wide variety of on line kite stores, clubs and organizations such as The Kite Trade Association, Revolution Kites and others, expanding our knowledge and experience with every new site we become involved with.

As a publisher, the only things I’ve not been satisfied with in the magazine as of late are an ongoing lack of articles and content from the fighter kite, kite making and power/ traction kiting communities… While I have a reasonable familiarity with these areas of kiting, they do not occupy much of my time personally and to be quite honest, have suffered as a result. With that being said, we would dearly love to gain more correspondents and contributors from these facets of kiting in future issues… If you or someone you know can help us fill these gaps, please don’t hesitate to get in touch with us.

Through workshops, invitations and the support of my individual sponsors, I was able to attend 37 kite related events in 2006 and another 32 events over this past year… At the same time, this enables me to gather and solicit a wide variety of articles, videos and other content from all over the world… In this coming year, I expect to attend something in the range of 40 events throughout North America and abroad, performing and promoting kite flying both within and outside of the kiting community.

With such a dense travel schedule, I’ve brought on David Hathaway as our new full time Editor at Large, who beginning with this issue, will be responsible for assembling and producing Kitelife’s bi-monthly e-zine which will leave more time for my other duties, including solicitation of new content and some of the side projects that have spun off from our little publication such as the video archives, Kite Lines and a few other ideas we’ve had around the office that I haven’t been able make time for. Without a doubt, I feel that David has done an amazing job with this issue, especially considering that it’s the first one he has been involved with on the assembly and construction side of things… Please take a moment to , and let him know how much you appreciate the work he’s done so far.

On the topic of promotion, I’ve been pleased to see what I feel is a growing response from the general public, to kite flying of all kinds… It would seem this is mainly due to a renewed effort by event organizers, innovations in how kites are being presented, brave explorations into new venues (i.e. Red Bull Air Races, etc) and a some hard core performers who are prepared for nearly any type of venue or wind conditions. Some of the more jaded fliers might say that this is a hopeful outlook at best… But, what I’ve experienced in the past two years has been far more tangible than this, and I truly believe we can expect to see even more exciting developments over the next 3-5 years, especially as the social climate and culture in North America continues to naturally evolve.

Off the top of my head, a few cool things I’ve taken note of that have been happening in the international kiting community…

The kiting community is still developing, ever-changing and striving for more ways to reach the general public… The age old debate continues of course, while some want kiting to become more popular, others would apparently prefer it stay relatively unknown. At the end of the day, I think growth is only going to be beneficial for the community at large, and there are enough suitable places to fly that I think we’ll still be able to find those places where we can fly alone and enjoy good wind. Remember, we already experienced 10 years or so where we were seeing nearly 60 competitors in most categories at any major sport kite event, we’re now down to a quarter of that or less.

Looking back over my 18 years in kiting, I see a cycle in process, preparing us for the next wave of leadership and innovation in the community… Like an organism of any kind, we have an unavoidable and natural process with both feast and famine. While you might choose to call me idealistic, my experience has taught me that illness and setbacks are the natural path on the way healing and growth in any organization or community.

It all comes back to each one of us, organically, speaking with new fliers and the general public… When flying, look around every now and then, issuing a simple “Hi, how are you?” to onlookers and take the time to talk a little shop, drawing them into the experience… A simple greeting indeed, but a great segue to finding more people who carry that spark which allows us to enjoy kiting.

Hand in hand with outreach is safety and awareness, taking responsibility for safety and education wherever we’re flying… It only takes one uncaring or unaware person to make a great flying field off limits, and in most cases, it only takes a couple of friendly exchanges to provide some context and methodology for practicing safe and fun kiting that everyone can enjoy, without creating a negative impact on the people around us.

In the beginning, we gained thousands of fliers with big, noisy kites and pretty tails… Are we really so far from a new wave of popularity? Who really knows, but I look forward to finding out as the climate changes with new leadership in both our governments and our own communities, hopefully some decreasing fuel prices, and as people once again seek more than the flash bang of electronic entertainment and perceived safety of their own homes.