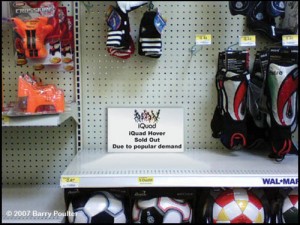 What? Its coming up on winter already? I’m scraping frost off of my car? How did this get to be! Yes, its settling into winter here and thus, I don’t get out as much as I’d like to for flying, but, that doesn’t mean its very far from my mind. Towards the end of this article, I’ll talk about some winter Rev-centric events that are coming up but, to begin with, a look at the single most important Rev skill you can develop. The Hover. Last spring, Barry Poulter was getting his feet wet flying a quad regularly. As he’d designed the now nearly iconic “Eyes” Rev sails that we all adore, he felt (and quite rightly!) that he should get a better command on Rev flying in general. We were all out flying after the Lincoln City Indoor Festival last March and as John is guiding young Mr. Poulter (who had had an entire 2 times flying a Rev previously, both of them back in 1991…), John makes the remark “Own your hover!” which not surprisingly has become the subject of many tales, jokes, etc. over this past summer. Hence, the picture at the top of this article, which Barry himself concocted.

Really, it’s the key ability that leads to everything else. While you can learn a lot of moves without having a hover mastered, it’s going to be much more difficult, if not impossible in some cases. Smooth clock turns? Hover based. Smooth slides across the window? Hover based. Team flying? Buckets of hover. And while it can be the trickiest of “basic” rev moves (well, ok, its not as move as much as it is a “standing still”) to get down, with some good direction, it may take you a lot less time than you’d expect.

Let’s start with equipment first. This is the really easy bit, because it applies to any Rev you may own (any quad line for that matter). It all comes down to the tuning at the handles. John has referred to it in the workshop we gave at the AKA Nationals as the Zero Point, I refer to it as the Balance point but, its essentially the same concept by either phrase. The idea is that your Rev is perfectly balanced with respect to where on the handle leaders the lines are attached. Bear in mind, you can hover with all manner of tie points, but, I can guarantee you that it’s tougher any other way. What you are looking for is a Rev that will simply sit still in the air, with as little effort as possible. Ie, when you have pulled it up off the ground and you are 20 feet up, it will simply sit there. It won’t want to move forward, it won’t want to sink back to the ground, with your hands in a natural and relaxed position. If you dive stop it down to the ground, leading edge first, it won’t continue into the ground, and nor will it bounce up a little as it stops. We accomplish this by tying our handle leaders in a fairly specific manner. If you have a B Series Rev already, your handles are done like this already. If they aren’t, your top leader will be about 5.5 – 6 inches long, with your bottom leader being about 1.5 – 2 inches long. In a “normal” wind, say roughly 5 – 10 on a standard sail, put your lines on the very last knot on the top, and the very last knot on the bottom of the handles. B series handles are knotted already to allow for some adjustment back and forth, and my first Revisions column deals with doing this to any handles (just disregard having a long leader on the bottom, it seemed reasonable when I wrote the article many years ago 😉 ). With your lines connected like this, you will be either very very close to perfectly balanced or, it’ll be perfect. Just test it out a little bit, go up 20 feet and hover, and dive it down a few times.

Now that we have equipment setup behind us, lets look at some specific exercises you can do to help tune-up your hover. First, the easiest part, just hang it there in the sky, 20 feet off the ground. And keep it there! The key thing I see people do with this that sends them off is they simply use too much hand motion. The secret to holding this is to use as little hand movement as possible. I have referred to this before (and I’ll show people regularly) but, in a reasonable wind, it takes very little to hold onto the handles. No death grips are needed, you can learn to hold and control the handles with simply two fingers, your index up near the top of the handle, just above the rubber grips, and a pinky to control some reverse. That’s it. Over-controlling it is the single most common thing that gives people fits with respect to learning this. If you watch me do this (in any orientation) you will barely seem my hands move, just tiny little twitches that act as correction for jittery wind. My hands will not move, just miniscule adjustments. I’ll only make a “real” movement if I’m moving elsewhere. Once you can hold it 20 feet up, facing up, practice switching it around so the leading edge is facing left, or right. Your hand position will change subtly as you do this, but, you are still looking to be relaxed about it as you do it. Practice switching back and forth between the right and left smoothly, and as you get better at that, start stopping in between as well. Left, top, right, top, left. Over and over and over again. And you are now 3/4s of the way to having a pretty decent clock turn down as well.

The astute will notice that I have neglected to mention the toughest one to hold, upside down! I approached this differently as I got it under control. I started with the leading edge down on the ground, and I’d repeatedly practice simply coming up a few feet in reverse, and then I’d hold it there, and then have it slowly drift back down. See, the big thing that is the problem here is controlling that crossover point in a clock turn, where you are going from either left or right, to facing down. Most people will tend to spin or slide or crash out of this point as they are learning, so once you can hold it in place upside down for any RELAXED length of time, starting working on that. It helped me to visualize the crossover point. When you are facing left, your left hand is pulled back, and your right is forward, but, to get to the right, you’ll need to reverse this and if you treat it specifically as the bottom facing part is the crossover, it’ll make more sense for your hands. When it’s upside down, your hands will be at an equal point again, so, try looking at it this way Left on top – equal – right on top. For many people, including myself, it seems to help (for reasons unknown to me!) to spread the bottom points of the handles more than the top points. It simply seems to smooth out some of the bumps of holding that upside down hover. Watch a few other Rev flyers and you’ll notice it as well. Don’t even worry about going all the way around, the crossover tends to be much easier when going Left, Facing up, Right, the harder one is below, so devote your time to that one only for a while. With practice, you’ll not only end up with a much smoother ability to hold the Rev still in any orientation, you’ll end up with nice, crisp clock turns too! As an added exercise once you can smoothly go around 360 degrees, start stopping at the 1/8 points as well, bearing in mind that the tough ones are again the ones along the bottom swing, so, 7:30, 6 and 4:30 if you are visualizing a clock.

One last thing to play around with that will ALWAYS come in handy when you are flying within a team group, practice the specific points of a burst, moving into them both forwards and in reverse. Due to my usual position at the end of the line, I’ll spend practice time simply moving in and out from the 7:30 facing position. And yes, that’s a nasty way to back up, it’s probably a little tougher than reversing straight up but, if you work on it enough, it’ll become far easier. I guarantee it. Come find me if this hasn’t helped, ok?

Addendum : a few months down the road, Barry Poulter had gotten a firm grip on his hover and is now a member of iQuad, so, it can work!

So, onto the “miscellaneous” section of Revisions…

First off, I’d like to tip my hat to every Rev flyer who made it to iQuad’s team workshop and my own Quadpalooza party afterwards. We managed to luck out and get the best weather of the entire week and we had a great amount of flyers out to enjoy that sun. Imagine Joe Hadzicki’s face as he rolls onto the sand at Ocean Shores only to find the beach completely overrun with Rev kites. I think it’s pretty safe to suggest that everyone had a really fine time that afternoon! And, congratulations to all of the flyers who competed in this year’s Grand Nationals, it was the largest field seen in a few years, so, this is a big plus. Next AKA Grand Nationals, look for the first running of Quad Pairs as an event. You have been practicing and competing at that, right?

You know, I tend to really dislike winter. I don’t like being cold. I don’t like getting rained on and while snow is pretty, I prefer to see it from inside a house with a fireplace to keep me warm. Thus, I tend to suffer a little in the winters. I don’t get out flying very much at all (this alone drives me crazy!), I don’t see my usual gang of kite cronies, often until the spring! THIS WILL NOT DO! Thus, a plan came together. We needed to get iQuad somewhere warm in January and thus, we’re off to the Treasure Island festival on the Martin Luther King Long weekend! YAY! And, we have a plan. The current record for a rev mega fly in North America is 18. We’re aiming to demolish this and if you live anywhere nearby, you need to help us do that! 120 foot lines. A Rev, and a mastery of what’s covered in this article will get you involved. Make plans, because, we sure have and we’d love to see you in person. Also, it’s the Eastern League’s SASKC competition as well, due to St. Augustine having much of it’s beach eroded away over the fall/winter storms. AND it will be the first Tricks Party USA event for the new year as well. Just how much more kite excitement could you ask for in a weekend? See you there!

Next month, I think I’ll chatter about 20 years of Revolution Kites because it’s their birthday!  And of course, I know you have all marked down to appear at the birthday party in Bristol this coming August. The Decorator’s 20th anniversary and Rev’s, all at once. Can you imagine the cake we can have in England? I think Bazzer is working on his Christmas Pudding recipe already….

But for now, I’m out of here so, have a fine holiday season and we’ll see you back at this spot in 2 months. Fly lots, if you can!