Some thoughts on the Treasure Island Kite Festival. Some of the joys of being AKA President are sitting in on Board meetings, sending reminders to Committee Chairs to have reports ready before, or, at least in time for, the Board Meeting, and writing President Report type articles for Kiting magazine. This past Board meeting was even more fun because it involved deciding on a site for the 2009 Convention. My day got spent wrestling information from a gazillion sources so that every site would be well represented to the AKA Board. 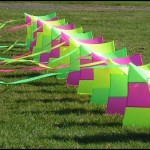 What does that have to do with the Treasure Island Kite Festival you ask? Well, when the day disappeared in to phone calls and e-mails, and then the meeting went until 11:30 pm, and then it was time to write an article for Kiting, well, about 3 AM we got in the van to drive 1340 miles to Treasure Island. Oh, and somewhere in there some guy who’s initials are David Hathaway wants an article for Kitelife.
(editor’s note : I’m relentless!)

We stopped in Virginia to pick up some materials for Tricks Party. Tricks Party is a trick-flying only competition where the field is circular and rimmed with banners. It takes about 70 banners to outline the field and the Pit. Hey, did anyone in TI notice there wasn’t a Pit? Oops. The winds were very strong and gusty and at times banners came off the poles and blew down the field. Thanks everyone for chasing banners on Sunday. 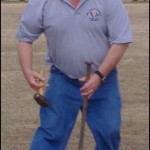 Saturday was foggy with interesting wind. It was so foggy that we kept joking, “Whaddya mean? All our kites are up? Can’t you see them?” When the wind settled out and the fog went away, I went out to the van to get the Peter Lynn Octopus. When I got back to the field, the fog was back with a vengeance. Preferring to keep 88 feet of Octopus dry, it stayed in the bag.

One of the ‘features’ of Treasure Island is Edd Brooks almost always makes it down from Cape Cod, MA. Edd is not known as a kite builder, but he had made a 20 foot ‘Parrot Head’ flowform that he had up, and a ‘Family Tree’ rokkaku with shamrocks on it with the names of all of his grandkids. He kept saying he wasn’t going to bring them out and get them wet, but in the end he couldn’t resist showing them off.

I had the privilege of delivering a stack of Dynakites to Evelyn Rossbach down there. I have never seen anyone so excited to have a stack before. It was great to see that kind of terrific enthusiasm. Evelyn competes in Novice and does well. We may have another Team Train competitor soon.

Gary Resnick who is somewhat local to Treasure Island, living just over 70 miles northeast of there, is another ‘fixture’ at kite festivals there. He had a terrific candy-drop rig that he had made, mostly out of PVC. 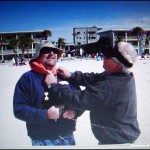 The most important impression I got from Treasure Island this year is that the vast majority of us are not competitors. We just show up and show off. Or show up and throw up. We are just there to see our friends, ooh and aah over each other’s newest kite or creation, and maybe fly something.

See you out there somewhere.