I keep hearing that the good festivals are slipping away and that few gatherings seem to be growing up to replace them. But all it takes is a couple of people willing to take the risk and make the effort. That’s certainly what I saw on Wrightsville Beach last weekend. Mike and Judy Agner put together the Cape Fear Kite Festival and 90 great fliers showed up to participate. There was precious little organized program on the beach but plenty of kiters having fun. 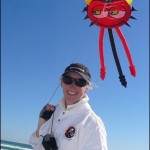 With Hurricane Noel hovering 100 miles off shore, we arrived to blistering winds on Friday. But by Saturday, the breeze had dropped off to a respectable 12-15 which should have been perfect for flying. The skies were blue and warm. But sadly, the wind came from the west, over the nine-story hotel, and swirled out onto the sand. Flying was difficult. But we tried anyway.

There were sport kite games, kitemaking for kids, and some scattered teaching fields run by manufacturers in attendance. But mostly it was a kite party. And Mike being a big kite flier had attracted a pile of fabric that included 13 giant Octopus.

Did I say the winds were difficult? At any given time, banners would be leaning in opposite directions and anchored kites would shift from left to right.

Sunday we moved the octopus show north and away from the hotel. The beach was more narrow there, but with the tide going out in the morning, we had several hours of flying time before it returned.

Land Rover was kind enough to sponsor the event with several four-wheel vehicles. They proved great anchors. But it makes you kinda nervous when a big kite blows back and envelopes a brand new $70,000 vehicle that no one has paid for. (Please don’t tell Mike!) 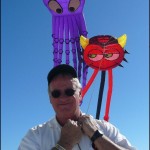 The flying ended early and the celebration at the Agner’s went late. I’ve got Cape Fear on my calendar for next year again. And with luck, the winds will favor us with a better direction. But even if they don’t, blue skies and warm afternoons on the beach in November should continue to draw the kite faithful from around the region.

Maybe you should join us too!