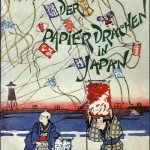 Another easily overlooked gem in the Drachen Foundation’s collection is the 1914 German pamphlet,  Der Papier Drachen in Japan. Written for the Linden Museum in Germany by Dr. W. Muller, German Consul in Shimonseki, Japan, this pamphlet shows an interesting view of Japanese kites through the eyes of a European. Including photographs, drawings and twelve color plates showing 31 kites and a scene of a festival, this document provides information that even a non-German speaker can understand and find interest in. 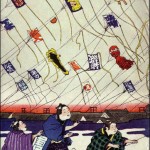 The short pamphlet gives a fairly thorough view of selected kites in Japan from the early 20th century. It includes simple, structural drawings for several Kaku-dako, the Yakko (called Dambei Drachen), the Kasuza Drachen, the Nagasaki Hata. Of particular focus are the Wan wans, giant kites that weighed sometimes over 6,000 pounds and took large teams of men to build and fly in competition. Included are detailed pictures of the handmade rope for these kites, as well as an interesting drawing of the ground-stake and winder method used for these giant kites.

For a collector, this pamphlet is a valuable resource. The illustrations used to describe celebrations in Nagasaki, Echigo, and Tokushima are all commercial post cards of the day. The cover features a famous ukiyo-e by Yoshitora, and a spectacular bonus is the last twelve color plates showing a variety of Japanese kites. These are wonderful documents showing the artistic treatments of that time period.

For the kite enthusiast who might want a quick project that could be a contribution to the English-speaking kite world, a full translation of the pamphlet would be invaluable. Copies of the pamphlet can be obtained by contacting the Foundation at information@drachen.org.