Editor’s Note : In what seems like a growing trend lately, large groups of Rev flyers are gathering for weekends of learning and play. With that, we have Fraser McNelly reporting in on the second rev training weekend that’s been held in England. We’d also like to thank all the flyers who contributed photos through Fraser: 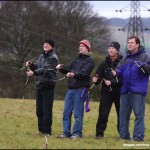 Wondering just what I’d find at a UK meet of those who have discovered the strange and addictive world of Revolution kite flying, I pulled into a wet, grey car park at about 9:30.  I was immediately heartened to see Revs up and flying and, despite a totally overcast sky, there were loads of ‘em! Within just a few minutes, my kite joined well over a dozen others wrestling with the challenging conditions, the numbers constantly growing until by mid-morning we had 22 flying Revs!

To a newbie like me, the range of kites was amazing.  A myriad of colours and panel patterns – though, I think, almost exclusively 1.5s – literally filled the sky above the site.  No-one mad enough to go non-vented as far as I could see, but all coping well with the constant-18mph-continually-gusting-to-30mph wind.  From B-series venteds, through Stephen Hoath’s full-of-holes ‘super-venteds’ to so-called ‘FLIC revs’, because of their use by Four-Line International Club from France – with the sails made entirely of narrow strips of fabric in a star shape.  The last time I saw anything as ‘strappy’, I was trying to persuade a girl to take it off!  Nevertheless, in their element in the conditions, they seemed to fly beautifully.

Despite the return of the rain in the afternoon, we ALL flew, ALL day until eventually there was so much water falling that one literally couldn ’t see across the flying field!

A number of us adjourned to a nearby pub for a few beers and to re-hash the day.  We decided to go to our various homes or hotels then come back in a couple of hours to spend more time together (and have few more beers…).  Annoyingly, I managed to mess up an arrangement to travel back to the pub with Ian, so I missed it, but a good time was reported and everyone managed to turn out on Sunday!

Sunday
Sunday seemed more promising weather-wise – clearer, brighter and no rain!  Another 10mph gave us all something to think about though and ensured that none of us got complacent with the progress we’d made the day before!

An even better turnout meant the field was even busier and the scene was set for another thoroughly enjoyable day – the daunting wind ensuring that everyone got a real workout and the team flying providing a marvellous centrepiece to the activity.   The Flying Squad inspired all those of us with lesser skills, either by providing a display of ability we could aspire to or, for those confident enough, by generously welcoming anyone willing into the world of team flying, with a number of people getting a taste of the discipline required.

All-in-all, a thoroughly committed and worthwhile weekend then – a sentiment I know was shared by everyone.  But wait – who’s that arriving and quietly setting up their kites?  Turned out it was a bunch of lads who know a thing or two about this Rev lark….  To my shock, The Decorators graced our meet with one of their rare appearances, underlining – as though it were needed – the worthwhile nature of the weekend. 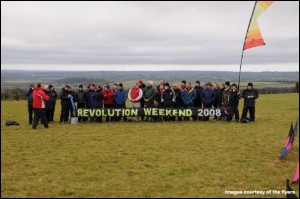 At this point we all gathered together for a group photograph and to sample Mr Brian Beasley’s outstanding pork pies and the camaraderie really blossomed.  It was now that the wonderful generosity of Mike and Dave from KiteWorld came to the fore, with their donation of prizes for the raffle.  Bruce (Harrier) going home with a sought-after a 20th Anniversary Rev and Doug now having a smart new Revolution kite bag to inspire him to re-build his Rev collection following his retirement as proprietor of Dunstable Kites.  Woody, a local flyer, will now be cutting a fine dash at future (if warmer!) Rev meets in his Drachen/Rev Anniversary T-shirt which, along with a huge number of patches celebrating their 20th Anniversary as well as a number of the sought-after spares packs – all awarded to deserving recipients throughout the day – was kindly and generously donated by our favourite kite maker – Revolution. 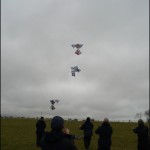 Rob (Skunk) had taken time out from his excellent flying to erect an impressive banner, which must have taken hours of work to make and provided a proper focal point to the field and looks great in the pictures.  Along with the number of Revs however, it also attracted the National Trust’s on-call ‘jobsworth’, worrying about an un-sanctioned ‘event’. Funny – you’d have thought they’d have been reasonably pleased that 20-30 nutters would want to spend two entire cold, wet January days visiting the architectural masterpiece that is their Visitors’ Centre.  There MUST have been 150-200 £3 visits to their café – surely not to be sneezed at.  Ah, sorry, I forgot – this is Great – ‘Oi – stop enjoying yourselves.  I distinctly saw you smiling without a permit – I won’t tell you again!’ Britain, isn’t it?  Ha!  Oil was swiftly poured on the mildly troubled waters though and with time for a little more flying to round off a great two days, the group started to disperse across the field.  We soon started to drift back however, as the Flying Squad and Decorators for the first time blended into one team and defied the by now very strong wind to give us a tantalising taste of what might be thrilling us all later in the year….

By now, though the rain had stayed away, it was time for us to begin packing up and start heading off in all directions across the country, for hot drinks, warm fires and some reflection on a fine weekend of good company. 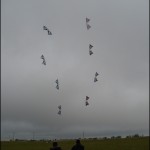 Ably supported by the large number of wonderfully-talented pilots, including my fellow long-traveller (though from the opposite end of the country) Dave Ellison, Simon Dann, Flying Squaddies Gary Tyrrell and Matthews and of course, all those I have missed or whose names I didn’t manage to catch (I’m sorry!), Stephen Hoath was a marvellous host as usual – always seeming to appear on one’s shoulder just when a little more help was required.  My old and addled brain being what it is, I won’t try and name everyone whose hours of selfless coaching made the whole weekend a pleasure, but there can’t be many hobby activities where those at the very top of the tree would, at their own expense, travel miles in bad weather simply to help others – some with virtually no skill whatsoever – to enjoy themselves.   Back home again, I tried to describe the experience to a cyclist friend of mine by likening it to he and his friends setting off on a Sunday morning bike ride and US Postal and T-Mobile – including Lance Armstrong and Jan Ullrich! – turning up to join them and help them make the most if it.  He got the picture….  I hope all of you who weren’t lucky enough to be there do too!