25 November dawned on clear skies, oodles of sunshine – – but NO WIND!!!! Not a happy picture for our day in the sun with friends for the annual beach-side kite fly at the Yokohama Kite Club.

Four of us, members of the Musashi Kite Club* left our neck of the woods at eight in the morning, fully expecting the trip to Uminokoen, or Ocean Park, to take its usual two-hours through traffic. But, lo and behold, we zipped through in record time arriving a little after nine!! Wondrous things do happen from time to time. 🙂 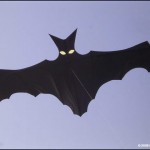 The location of the kite fly is on a man-made beach adjacent to a man-made bay, a perfect venue for flying kites. But, as mentioned above, there was no wind to speak of so after arrival time was spent greeting old friends. This event draws kite fliers from mainly the Tokyo/Yokohama area, or as its commonly known, the Kanto district. On occasion some brave souls will venture down from the northern Tohoku region, but this year saw none present.

For the rest of the morning our activities included rushing to our kites when a puff of wind appeared, and chatting with other kite fliers, showing off our new designs and generally settling-in for what turned out to be a very warm and comfortable day. 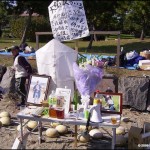 A memorial was set up to honor the memory of Teruaki Tsutsumi, the curator of the Tokyo Kite Museum, who passed away recently. Known to all as a very warm-hearted person, easy to talk to, someone always willing to share his knowledge of kites, Tsutsumi’s passing was a loss all of us.

For visitors to Japan, those who ventured to the Tokyo Kite Museum, located in the building housing the French restaurant Taimeiken near Tokyo’s Nihonbashi area, you might have met Mr. Tsutsumi there. If so, count yourselves lucky to have known him during his lifetime. 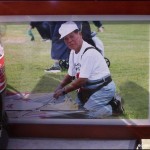 Around lunchtime we were honored by a short spate of wind, allowing us to get our kites in the air. One of the most impressive kites was the Bat Kite made by Masami Takakuwa, a member of the host club. Mr. Takakuwa, well known for his crow kites, has now produced an addition to his stable of a bat kite that flaps its wings in a most realistic manner.

Made of carbon rods and ripstop material, with the sun shining through it yellow eyes, this is a most impressive kite to see in the air. Along the same vein – his interest in birds – Takakuwa also produced a Tsubame, or swallow, kite also made using carbon and ripstop materials. In flight this kite flicks its tail not unlike a real bird and is quite nice to watch! Its amazing how a little interest in realism can bring about such startling results. As a matter of interest, to see more of what Mr. Takakuwa’s activities, check out:

This is Takakuwa’s home page describing many of his achievements in the realm of kiting. 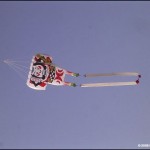 One other kite worth mentioning is the “soft” or sparless Yakko kite made by Mrs. Sanai Kumakura. This kite was designed by Katsutaka Murooka, the president of the Musashi Kite Club and the Japan Kite Aerial Photography Association. The usual Yakko kite is made with bamboo spars and hand-made “Washi” paper. This sparless design is not only easy to fly, lovely to look at when in the air, but it folds up for easy transport!!!

The time finally arrived, and after saying our thanks to the host club for a great day of fun and flying, we headed home – – and another surprise; Traffic on the return leg was so light, we made it back in under an hour!!!! What a terrific way to cap a great day!!!!! 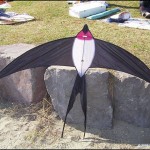 A few words about the Musashi Kite Club. This club was established by Katsutaka Murooka, see above, some twenty-plus years ago and claims a few square meters of turf at the Musashi Chuo Koen, Musashi Central Park, in Musashi City located about forty-kilometers west of Metro Tokyo. 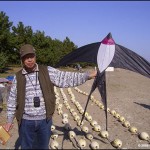 In the past this club claimed thirty-plus members, but due to a restriction imposed by the park authorities of no “sport kite” flying, membership declined over the years and present-day membership of single-line fliers is down to a handful of true believers!!