I remember the first time I found out my husband, Chris, liked to fly kites. It went something like this: 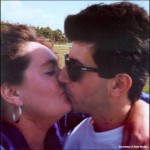 Chris: I work in the kite industry.

You have GOT to be kidding me!)

For some of you that “get” kites this may sound harsh. I’m just very lucky that Chris was very intuitive and knew right away that I was one of those people that had no idea about kites. After this conversation our next date was to the beach to fly kites. He wanted to show me what he was talking about.

We parked and strolled across the dunes and found a nice open spot. He asked me to sit right in front of the kites. I watched as he rolled out his line and put his stack of kites together. 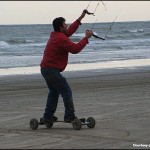 I watched some more as he untangled and sorted some more and finally jogged down to the handles and picked them up.

When he leaned forward and snapped those lines and those kites took flight I couldn’t take my eyes off of him. He moved his arms with such grace and his feet never stumbled and it looked like he was performing the most beautiful tai chi I had ever witnessed. His face was determined and confident and he made those kites do his bidding with skill.

Then he asked me to watch as he used the kites to spell my name in the sky right in front of my face. He finished with the shape of a heart. I know my eyes turned into those cartoon beating hearts because at that moment I fell completely and hopelessly in love with Chris Shultz.

We traveled for his competitions and I would sit on the sidelines and watch, holding my breath until his ballets were over. Then I would cheer wildly and he would pick me out of the crowd and give me his biggest smile. I never grew tired of watching him fly. As the years have passed he’s stopped competing. We now travel together to festivals for his work. He does demos and I still sit on the sidelines and I cheer wildly. I am his biggest fan. 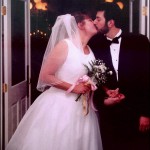 That day on the beach was fourteen years ago. Chris and I are happily married and the kites that made me fall in love with him have given us an unforgettable and wonderful life. They have taken care of us and they have taken us around the world together. I hope this kind of bliss for anyone in this world looking for love. Just look up…it’s there waiting for you in the most unexpected places.