Ever since the Mega Kite Series was first started, we’ve been dreaming of the chance to fly all three together.

The first of these 10,000 square foot creations was made for the Al-Farsi Family in Kuwait. The second was produced for David and Susan Gomberg and GKPI. And the third was crafted for Masaaki Modegi in Japan. But the kites weigh 500 pounds each, and moving them around the planet is a bulky and expensive challenge.

So imagine our delight when Andrew Beatty called on New Year to say that the Al-Farsis were prepared to host a show on their home flying field. All we had to do was assemble the USA Team, organize air tickets, and get the kite there. And so it was I found myself calling Fed Ex last month to say… ‘I’d like to freight a crate to Kuwait!”… 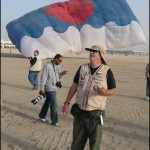 Now some people, my mother included, greeted the news of a kite gathering on the Persian Gulf and so close to the war zone with some trepidation. But we knew the area to be progressive and very friendly toward the USA. Afterall, 18 years ago, we led the coalition to push the occupying Iraqi out of Kuwait. There was no history of problems or incivility in the area.

Jim Martin, Mike Agner, Susie and myself boarded the flight from Dulles and 13 hours later, touched down to start a new adventure and make many new friends in a delightfully fascinating place.
Our first surprise? The four-star hotel where we were based was hosting a lavish Valentine’s Day Dinner on the 19th floor. Susie was presented with roses by the staff and non-alcoholic champagne was poured for everyone.

Day One: The flying field is huge! And of course, it needs to be. Tents along the edge are carpeted, and plenty of local volunteers are here to help. We’re each provided with name badges and vests embroidered with the logos of the participating teams.

But the wind is blowing hard and cold. We’re not prepared for the low temperature. And the dust storms prevent any serious flying.

So instead, we huddle inside for a huge luncheon with kabobs and fruit smoothies. Susie and I strike up friendships with some of the volunteers who are as anxious to learn about us as we are about them.

Outside, some larger show kites are being launched. We’ve got inflatables and art kites from Japan, the UK, Holland, New Zealand, and the USA.

When something pulls loose, vans race across the field to retrieve them. AWITA of France lofts a series on Deltas. As the winds pick up, one kite breaks away and lands in an overflow pond from a nearby oil well. So the French team will take a little Kuwaiti petroleum home with them…

Day Two: The wind is reasonable. We pull out the big kites and work to prepare a launch. Huge excavators have been provided as anchors. But small stickers in the sand are grabbing hold of all the heavy spectra lines and welding them together like Velcro. It takes hours to sort the bridles.

Finally, everything is ready. We defer to the host Kuwaitis to launch first. They go up, then we inflate and launch. But immediately there is a stress problem at our lower right edge. We bring the big kite down to discover a 10 meter tear in the corner. Peter Lynn joins us and we begin field repairs. That means long hours inside the kite sharing sewing needles and patching rips.

Day two is proving problematic for everyone.

On the center field, the Kuwait kite is rising and dropping in the gusty winds. Team leader Beatty holds one of the lines and forgets the primary rule of large kite flying. If your feet start to leave the ground, let go!! He is lifted 15 feet into the air and dropped to the hard surface. An ambulance is called. Andrew has a broken elbow and severe ankle sprain. He’s lucky. The Kuwait kite comes down as the ambulance pulls away. It too has stress tears.

Finally, the Japanese kite launches. From a distance, it appears to fly well. But after half-an-hour, Modegi and his team bring it down too. There are stress tears thirty feet long in the lower corner. So the afternoon is spent doing field repairs. And with the designer on site, we’re able to assess a consistent problem and work to fix it. Reinforcing lines are added to each kite. We consider a sunset launch of the USA kite but decide we don’t want to be out packing up in the dark.

Day Three: The wind has turned and is perfect for large kite flying. Since we had been damaged first, we’ve completed repairs first. We position for a launch and adjust anchor points. As the kite inflates, there are cheers from around the field. Cars pull off the nearby motorway to watch.

Japan’s MegaMoon is laid out and a team is sewing at a rapid pace. As soon as they finish, the kite is inflated. We now have two in the air! Minutes later, the Kuwait Flag is also being filled. Andrew directs from the sidelines. And the rest of us hold our breath with anticipation. There is a sense across the field that we’re about to experience one of those special, historic kiting moments.

Kuwait lifts off. The three kites undulate in the turbulence that each has created for the other two. And then all three are in the air. The field is strangely quiet as I think, most of us are simply in awe. And then smiles, hugs and congratulations break out.

Andrew later observed, “We managed to make a dream come true. Abdulrahman Al-Farsi brought together a global band of some of the best fliers in the world from America, England, France, Kuwait, Netherlands, New Zealand, Japan and Scotland to simultaneously fly the three biggest kites in the world. The memory of seeing the three giants, floating gently in the setting desert sun will stay with me to my dying days.”

The winds dropped off on cue and each kite settled gently to the ground. A perfect ending! Then we began the physical task of stuffing each into transport bags. The USA team was smallest and finished last. But there were not enough of us to lift the kite into the truck! Five hundred pounds is a lot of lifting! Fortunately the shuttle bus driver was helping us. When the other fliers realized they couldn’t leave until we were done, a contingent came roaring back out across the desert to help!!

Bringing these three kites together was a remarkable accomplishment. I thank Abdulrahman for his vision, organization, his friendship, and for expending no small amount of money to make it happen. I also want to thank a superb flying crew – Jim, Mike, and Susie who spread, launched, retrieved, repaired, launched again, and pulled thousands of stickers from the line. At the end of the day, we ached all over – but felt really good!

As Day Three wound down, the fliers gathered for an enthused farewell dinner. Speeches were made and mementos exchanged. Then some headed for the airport and some for bed. The USA team had one more day in Kuwait. Our new friends picked us up for a shopping and sightseeing trip. We concluded the day with a special honor – a visit to their family home and meeting all three generations. Then we retired to our hotel to pack.

The flight home was long. Very long. But we slept though most of it. And now, for some reason, I’m wide awake at four in the morning, composing this report in the home office. And our kite? The crate is freighting from Kuwait for its next flying date.