6 years ago, a few members from Gone With the Wind’s  forum decided to get together at Huntington Beach for a Kite Party. 6 years later, the event continues to grow and it’s become the first “major” outdoor event on the West Coast for a new year. Put on by Dave Schenkman (and a bunch of hard working volunteers!) who runs The Kite Connection up on the pier, it’s an excellent excuse to escape winter blahs and get a look at what may be new in the skies this coming year. It’s also a good reason to just hang out and catch up with kite friends in person.

The luckiest people (and there are a few every year) are the ones that can head down to Huntington Beach early in the week. I think the record for early arrival this year rests with Mike Kory, fearless leader of the IKE (more on this crowd later…) who arrived sometime on Monday and then proceeded to fly every day up till the event started and then just kept on flying. One other lucky family was the Ken Bleasedale and company who were also down for the week, from England, easily winning the greatest distance traveled for the event. Most people seem to start drifting into the town in force by Thursday evening, and we (that being iQuad with John, myself, Steve DeRooy and Todd Rudolph) arrived that same evening, settling into the “designated” festival motel, our old friend the Howard Johnsons. As you look around the central lobby of the motel, you can tell the kite flyer rooms because they nearly always have at least one kite in them. Ah, looks like another full house! Unfortunately, the weather forecast was suggesting less than optimal conditions for the event, ie, a fair amount of rain. Upon arrival, indeed it was raining but, we were told it had been ok during the day. 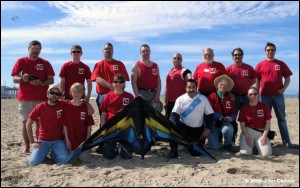 I suspect a few people came in early as iQuad was holding an impromptu quad skills session down on the beach on Friday morning/afternoon. This was the first in what’s managed to turn into few similar “workshops” we’ve held this season and we managed to get a good sized group together for it. I’d mentioned IKE (Illinois Kite Enthusiasts) earlier, and what a dedicated group of flyers! Numbering 14 for this event, they were easily recognizable in their bright red shirts. And they never stop flying, whether its quad (which most of them are skilled on), duals or SLKs. They beat us out there every single morning and they were usually still going when we left. Hardcore, the whole bunch of them, my hat is off to their crew.

While it was lightly raining when we awoke, by the time we’d gotten down to the Sugar Shack for breakfast, it had stopped raining and it was even threatening to get kind of nice out for the start of the workshop! And that’s exactly what it managed to do, the afternoon was spent flying on a mostly sunny day down at the beach. All the people who come in from cooler climates were taking off layers and the beach was filling up nicely with kites. After the workshop, Revs took over a chunk of the field and played the day away. In contrast to previous Kite Partys, the Rev contingent was out in a big way, you could see one or trip over one in nearly any direction you looked. Over the weekend, more duals made it out of bags but, certainly on Friday it seemed to be All Rev, All Day!

As the sun began to set, most of us headed up to a small restaurant on the main street for a great meal of greek food, followed by some ice cream and conversation out in what was almost a warm evening. And in time to get a reasonably early sleep so as to get a good bright start to the morning.

Saturday morning, there was no messing around, it was simply really nice out and the day remained that way from start to finish, in a complete defiance of what the weather “forecasters” had deemed it would be. One of the biggest joys of Kite Party is Dave’s insistence on not having a formal schedule, so the day is pretty much a free for all of simply flying what you’d like, whenever you’d like and for the most part, wherever you’d like. The sky became a kaleidoscope of colour as duals, quads, fighters and SLKs began to fill up the sky. Various manufacturers were out showing off their latest kites, including Prism, Revolution, Skyburner, Blue Moon Kites, Premier, New Tech and Go Fly a Kite. I found Go Fly a Kite’s “Star Wars” themed kids kites to be pretty amusing and there was even a real Darth Vader walking the beach for a while. Rumor had it that it was Randy Tom but, I’m fairly convinced Randy wasn’t that tall. Regardless, the kids ate this up. Eventually, Dave caved to a momentary moment of scheduling and ran a few demos by various people, including iQuad and Too Much Fun. But, it was only short so Dave can still claim to be mostly schedule-less.

Last year, Go Fly a Kite had donated a large number of simple kites that Dave had sold off at a low price to act as a donation towards the Lummas Family and their sick little guy, Ben. I was pleased to see the same thing happened again this year, and the kites donated were even nicer! Large diamond kites that I’m sure the people that bought, will continue to use over the summer and this time around, 100 kites were sold at $20 a kite. Guess how long they lasted. Last year, it took about an hour to sell off all the kites but, this year, the entire 100 kites were gone in approximately 10 minutes flat. WOW! Not bad! Most of these were then put up into the air, creating a nice little sea of diamond kites fluttering above the beach. After this event, the field was cleared for another (brief) round of demos and then it was back to the laid back business of flying for the rest of the day.

Saturday evening saw us all descend of the usual pizza place which is about 10-15 minutes away from the beach to chow down on some great pizza. Last year was pretty cozy with the back space of the restaurant being dedicated to Kite Party participants but, the larger number of people this year managed to spill us out onto a few tables in the main restaurant as well. If the trend continues, I think we may need to simply book the entire restaurant! There was some great kites that went thru the lively and spirited auction. Me, I behaved myself for the most part and only came away with a custom, one of a kind, Corey Jensen manufactured Shot car! At least, it better be one of a kind… I do know the signed 20th Anniversary Rev auctioned off was!

iQuad had a special guest all day Saturday, Sebastian Clarke of FLIC who now calls North Hollywood his home. If you go back to the very roots of iQuad, you find Seb and FLIC right in the middle of it as they were amongst our original inspirations for putting a quad team together in the first place. Before we’d flown down, I’d invited him to come on out and say hello, stating “bring nothing, we’ll have a kite, lines and handles for you if be. He spent all of Saturday flying with us, came out to the banquet and then showed up all day Sunday as well. Given he’s been over in the US for just over a year now and not having any chance to fly team with people, it’s pretty safe to say he was thrilled to spend a weekend down on the beach flying quad team all day, both days. And nicely, he simply walked up, grabbed a kite and off he went. With 8 years of experience with FLIC, he knows a thing or two about flying team and he possesses that inate ability to not only focus on his own kite but, he can see the bigger picture “group: alignment well too. A genuine pleasure to fly with and hopefully we’ll see him out at further events this year. I think the highlight from iQuad’s perspective on Sunday was being allowed to fly UNDER the pier to walk over to the other side and give spectators on the pier a good close up view of the kites. Close as in directly over their heads kinda close. Thankfully the pier police were very understanding of this, and the crowd sure enjoyed it.

Alas for me, I had to split from the beach around 4 in order to catch a quick flight back home to start work on Monday once again, so I missed out on whatever everyone got up to that evening but, the overall feeling I got as I left was that it was a pretty fine Kite Party this time out. I’m hoping to make it back again next year to see even more people out taking advantage of Huntington’s fantastic beach. Thanks again Dave, you sure know how to throw a kite party!