“The wind died!!”  Familiar problem?  How often have we moaned over loss of winds at the field or beach, but then utilized that opportunity for a fun-filled “shooting the breeze” sessions with your fellow fliers.  Is that the problem?  No breeze at the beach?  Well, stop shootin’ it!!  Sorry.  Seriously (since you had a good laugh), hilarious kite-related stories are shared amongst friends from those very special “breezy” sessions.

Woven in between the tapestry of kite flying are memorable moments where onlookers made your day unforgettable by giving us a hearty chuckle or a hair-raising request.  I believe most kiters flying regularly have become a part of the unexpected lurking out there.  When you fly a dual line sport kite, passersby think you are open to conversation or even a kite flying lesson. 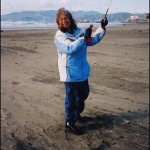 Our Ocean Beach Kite Fliers in San Francisco are no different when we color up the skies with dashing 100-foot rainbow tube tails and sometimes five tails dancing simultaneously! Attached to our dual line kites, they swirl and twirl looking similar to those Chinese ribbon dances, whether they be the 100-foot black and white tube tails, flat tails, or the colorful rainbows, our favorite. They have attracted hoards of spectators giving us the opportunity of being ambassadors for the sport.  Yet, from time to time we will get unforeseen surprises filtering through during a substantial kite show.

The following anecdotes are contributed from our fliers: Larry Medina, Ken Wong, James Lam and myself, Joan Laurino.  I am saving the best howl for the last!

A kite fly to remember took place near the shoreline of the ocean!  Larry was watching a big guy trying to launch a single-line crocodile kite by running backward to catch the wind.  Low wind speed prompted the flier to keep hurrying back while releasing more line.  To his surprise and embarrassment, he ran into deep trouble when a two-fisted wave barreled in and drenched him up to his knees!  His wife seemed oblivious to this future event and could have spared hubby from salt watered pants! 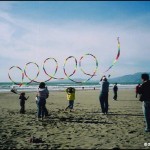 Then, we had a little kite that preferred to fly by itself over high water. Ken Wong tested a brand new single-line Fox Bat kite, but due to the light winds, he figured that an anchor was not needed and buried the fly line spool deep in the sand, or so he thought.  Without warning, a heavy gust pulled the kite and spool loose, propelling it toward the water!  Larry yelled, “Hey! Your kite is going down toward the ocean!!”  Ken and I were unable to run fast enough and gave up heartbroken until the strangest sight materialized. With the spool acting as ballast, Fox Bat continued to sail aloft over the foamy waves and lingered for a while and giving the impression of an invisible kiter.  Minutes went by, as Fox Bat diligently remained airborne until he disappeared and flew on to Hawaii.

Got Kite?
One common and deep reaching situation involves kite sales to eager people.  We have learned to “smell the coffee” and formed a habit of carrying extra kites and fly line for those radiant moments where someone wants a kite right now with a flying lesson.  They beg for what they see in the air and to our surprise, take no for an answer while handing over a fist full of dough. They want the whoooole enchilada.  One day, the buyer was a kid! 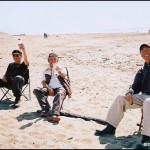 A little boy about nine ran towards James Lam, who is another impressive flier.  As he was snapping his 100-foot rainbow tube tail attached to a Spider kite, a little kid ran over and wanted to buy the Spider, line and the tail since he loved it so much.  However, James didn’t take him serious and said,” You can’t afford this!  It would be over $120.00. The boy replied, “But, it’s beautiful. I want it.”  James ignored him and mumbled, “Okay, talk to your Dad.”  The child then runs back to his father standing above the seawall.  James assumed he was gone until the boy hurried over with a hand full of $120.00 worth of bucks!  “Now, can I buy it?’  James was startled.  Still skeptical, he requested that he personally meet his Dad for official verification.  Within a few moments, his father came down to give the sale his full approval.  So, James may have lost some flying magic for the rest of the afternoon, but he made a little kiter-to-be, happy as a lark as he trotted off with his booty.

Another kite sale had a different twist.  Larry Medina encountered a young man who revealed a secret admiration for our flying while watching us from his distant hillside apartment.  Sure enough, on a sparking day, he spotted the swirling rainbow tail through his binoculars.  Later, he came over and spoke to Larry about the magic of kiting.  The conversation continued until he offered to buy his kite and tail,as it looks just something he could use.  By now, the young man was all fired up and decided to fly his purchase during the Burning Man event in Nevada and thrill everyone. Ahh Haaaa!  It is suspect that his flying program was set ablaze and swirled to ecstasy adding a spectacular finale to a kite demonstration!!  We never thought of that one and hoped that he had a good blaze. He has since disappeared.

Then one day while I was flying, a young guy walks over and hangs around with his old dilapidated bicycle.  He stood behind me and smiled while I acknowledged his interest and wondered if he needed any information.  Later, he sauntered over to James and after conversing for a while; composed a proposition.  “I’ll offer you a deal,” the bicyclist said. “What’s that?” James asked quizzically. “Can I trade my bike for your beautiful kite and tail?”  Stunned, James and replied.  “No.  I don’t need your bike!”  “Please?  I love the kite and tail and you can have my bike!”  James insisted, “No deal. I can’t fly a bike. There is nothing like my rainbow tail!”  Subject closed.  This was a new switch on us.

Then, there are critters and little kids who occasionally got involved in kiting not of their free will. 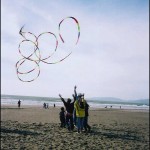 One afternoon, Ken Wong lassoed a wing of a seagull that became entangled in the slack line.  Ken hurried to the rescue and kindly approached poor “Charlie” who looked frozen with fright at becoming a good meal. His eyes were big and fearful as he stared at Ken who carefully removed the line so not to harm the bird.  As soon as the line loosened, “Charlie” took off quicker than a wink and didn’t bother to squawk, “Thanks, Bub!!”

Small doggies also get wrapped up, but in kite tails.  One day, a medium black dog was having fun chasing Larry’s rainbow tube tail. Suddenly, he got entangled as he kept turning around trying to get out and ended up looking like Christmas wrap!  It took the doggie master to untangle the “package” to freedom.  Just recently, a little 5-year-old boy had a tail wrap around. Laughing like heck from all the excitement, he fell over and gave up.  After his parents untangled him, he resumed playing in the tail ready for the next encore.

One major question that pops up often is from people perplexed if our dual line sport kites work under remote control!  This I will never understand, but they may not be seeing the line. The following story is the prelude to the second incident that became a classic among us Ocean Beach Kite Fliers.

A big foreign gentleman walked up and asked the unthinkable question. In a thick accent, he pointed to Larry Medina’s Prism Nexus and asked, “What’s that?” Astounded over such a question, Larry replied, “A kite! Haven’t you seen a kite before?” “No,” he answered. “How do you spell it? K E E T?” “NO. K I T E!!” James replied.  “Oh,” said the guy. “I never saw one before.  Where’s the remote?” “There ain’t none! replied Larry.  The stranger then mumbled something under his breath looking bewildered at really seeing a KEET with no remote, and walked off. 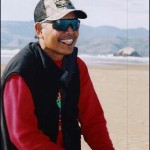 Later, this remote controlled kite question came full circle when we turned it into a howl for a lifetime. The setting for this playfulness involved both Larry and James Lam working as a team. Larry, was sitting on a small chair flying his Screaming Meemie while talking to James who stood nearbytaking a break.  James was full of the dickens that day and just needed a tiny prompt for hell raising.  He didn’t have to wait too long for a family walked over asking if they were seeing a hidden remote control device in order to fly with such precision.  They requested a demonstration to see how this was done.  Instantly, our two fliers saw an opportunity for mischief and through caution to the wind. Larry stopped all flying to look like a statue while the kite floated with little motion.  James being very cordial, explained,  “Yes.  Larry is the remote control.  Let me show you how it works. All you do is tap Larry on top of the head (which he did) and viola!” Larry moved his arms back and forth and the family marveled at the kite and tail performing beautifully. “Wow,” they exclaimed.  Did they believe this?  James continued, “You see.  Just tap him on the head and he goes!  Another tap on the head, he stops!”  Larry froze in the statue mode with a stoic expression until another tap on the head made him go again!  Later, over tea and cookies, James summed it up with a twinkle in his eye.  “You see how bad we are?  We are really bad!”  What else is new?

There, on record were several painted mosaics of magic and hilarity at Ocean Beach. When you are ginning at the end of your line, be alert, for normally there is more flying around than just those colorful fabrics in the sky.  If you diligently work your “tails” off, you might get an extra “holy moly” out of the day!  Stay tuned!