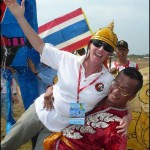 Twelve or so years ago, I was flying in Tasmania. The festival was winding down and I was trying to buy a coke or something and found myself a few dollars short. Mike Richards, who I had just met, loaned me five bucks and then went home before I could pay him back. In January, when Ron Spaulding asked me to recruit a team of international kiters for the tenth Thailand International Kite Festival, I thought of Mike. So I phoned him in Sydney, and asked if a trip to Bangkok would cover the loan and interest…

Thailand is always great! We began the festival with a classy welcome banquet next to the beach, listened to speeches at a formal opening ceremony, watched an Oversized Octopus tumble into the speaker stands and public tents, and wrapped up with a floating banquet on the Royal River. 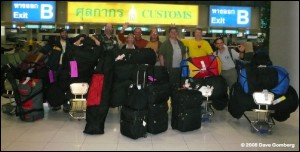 But it was also a hard show which began with a 30 hour trip to get there, and included long days and nights on a hot, dusty kite field. Winds blasted across the arena and then evaporated. Kites rose, tangled, and fell. We worked constantly to keep a show in the air. But we also felt good about the results.

Ron and Baew Spaulding — the “Kite Couple” handled major organizing efforts on behalf of the Thai Tourism Authority. Their Kite Crew worked constantly to keep cool drinks and solid anchors on the field.

In spite of challenging conditions, we managed a magnificent kite show. In addition to dropping the big Octopus into the spectators, Peter also unveiled a spike-covered version of his popular fish, and a new Giant Snake.

One extra day in Bangkok allowed us time to visit the Royal Palace, (Jim Martin hushed me up when I started humming tunes from “The King and I”.) We had fun haggling prices for a River cruise in an open long boat and enjoyed one last meal in the city. I reminded people that good spicy hot Thai food the night before a long flight was not a good idea…

We’ve just finished the festival and are now in Tokyo, headed for Guam. On the airport TV, we saw ourselves featured on BBC World News. Thailand was wonderful. It was fun and exotic, the kites and kiters were diverse and interesting, and the friendships, as always, were warm. Thai hospitality was outstanding.

Toward the end of the last night out, I turned to Mike Richards and told him I was a bit short of cash. He laughed and quickly pulled out five dollars. So I guess I’ll be calling him again soon!

Until the next festival,