I’m afraid I have an embarrassing story to tell.  There may be any number of lessons to be learned, but at the very least it’s a lesson in keeping your mind open to the unlikeliest of possibilities.  It’s also a story appropriate to the Drachen Foundation, as it was on this trip that I met Ali Fujino who would become a cornerstone of the Foundation.  So let’s go back to 1988, where the story begins. 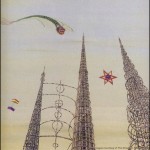 Having been involved with kites for over a dozen years, it was time for me to make my first overseas trip specifically for kites.  Having met Seattle’s Dave Checkley at AKA Conventions and seeing his remarkable Chinese kites, it was a no-brainer to decide to tag along with David’s Spring, 1988 trip to China.  Throughout that Winter I received cryptic missives from Dave on what to expect, how to prepare, what to bring, and how to behave in China.  Dave was a master at telling his charges just what they needed to know and nothing else – perhaps a defense to all-out mutiny of weary travelers unaccustomed to the rigors of Chinese travel.

At any rate, because of a family “guilt trip” to Hawaii just prior to my China trip, I would meet Checkley and his Seattle group at Narita Airport, Tokyo, Japan, and then we’d fly together on China Air to Beijing, where our kite adventure would begin.  My flight to Narita went without a hitch (you can talk to my wife, Sherry, about her trip back to Colorado with our three children, aged 11, 9, and 6.  She’s tried to block this little episode from her memory, but is plagued by flashbacks of airsickness, fatigue, and a broken and aromatic refrigerator.)

But let’s get back to our story.  I knew I’d have quite a wait in Narita, and for those of you who might have flown there in the 1980’s and early 90’s, you know there was precious-little in the way of luxury in the round satellite waiting rooms away from the main terminal.  A good book and an 800-Yen beer would make the wait bearable.  Two hours before takeoff, I could have sworn that Checkley’s group would be here by now!  I can’t really remember if he’d ever told me their arrival time, so not to worry.  One hour before takeoff, “Okay, they should be here by now and I shouldn’t, but I am getting a little nervous”.

Now I made a mental checklist of all the things I did and didn’t know:  Checkley and his group are not here, my China Air ticket is good for this flight, there isn’t another kite flier here that I can turn to for comfort, support, or a plan!  (Just before boarding there were exactly three other non-Asians in the now-jammed waiting room; an elderly woman traveling with a man and wife, probably her daughter and son-in-law.)  I didn’t know: my hotel in Beijing, a single person in Beijing, or where and how I might find my kite-flying group in this little country town of 10 million people. 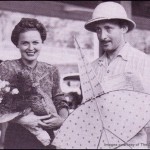 Boarding time, no Checkley, ticket in hand, I took that long walk down the boarding ramp to what would now, surely, qualify as an adventure.  I have no idea how long that flight lasted, only that we arrived late at night to a city that, from the air, looked deserted – hardly a light anywhere!  I thought of ten years before, flying over North Dakota – one of the US’s most sparsely populated states – there had been far more lights there than here!  Dragging my feet, leaving the plane, I got my first indication that I was not alone in my adventure.  One of the three non-Asians (remember them?) said the magic word, “Checkley.”  I quickly identified myself as a fellow tour member and out of mutual desperation we stuck together through immigration and customs, gathered our bags, and took the giant leap out of baggage claim and into China!  With no plan except to keep moving forward, I led the group onto the sidewalk where, to my surprise, the magic word was spoken again – this time in broken English by a young Chinese guide – “Checkley.”  Success!  The local guide assigned to Checkley’s tour had seen my ski bag (kite bag) and had correctly identified us as the kite group. Without incident we were whisked off to our hotel where we could wait in peace for our group leader, Checkley.

As an aside, having gotten nearly no sleep and rising early for the hotel breakfast, I encountered an Asian woman in the restaurant – she’d have her own adventure to tell – who startled me by speaking rapid-fire, perfect English.  It was Ali Fujino, a fellow Checkley tour member who I’d get to know in the next two weeks.

Let me finish this part of the story by saying that the trip remains a fantastic blur of events; everyone in some stage of the worst cold I’d ever experienced, directions from our guides given in broken English and then translated into German, French, and Italian by German Karin Zander, five kitchen clocks brought home to Colorado for just the right occasion, and the “three Californians” who just never seemed to fit with the wild and crazy kite group. 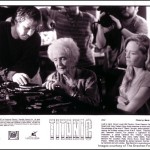 Now let’s get to the reason for this story.  I said this would be embarrassing and the sad truth is I haven’t come to the embarrassing part yet.  So let’s flash forward to 2002 and an invitation to meet actress, Gloria Stuart, at a lecture in Los Angeles.  Gloria had just turned 90 and had become famous – again – through her Oscar-nominated performance in “Titanic”.  She had been a true Hollywood star in the 1930’s and was all but retired when director James Cameron brought her on board “Titanic”.  Sid Burger, paper collector extraordinaire, explained that Gloria was working on a kite book and it would be interesting for us to hear her speak and to offer help if she needed.  It would also be our chance to see Sid’s amazing collection of paper.  Sid had been introduced to Ali at a Los Angeles Getty conservators’ workshop and she had immediately been drawn to his voracious collector’s appetite.  At the Santa Monica Library, Sid conducted a lively, informal interview with Gloria while selections of her work were displayed in the foyer.  This was no ordinary Hollywood actress!  Her books, each made completely by hand, were small masterpieces; type set by hand, original color lithography, engravings, and original poetry.  Each showed the caring soul that is Gloria Stuart.

During her lecture, the subject of kites was raised and I became convinced that here was a kindred spirit.  She had traveled, on the eve of WWII, to Asia and had encountered kites there.  She is pictured in her autobiography with husband Arthur Sheekman holding a Thai Chula.  She continued to be fascinated by kites and surprised Ali and I by mentioning a trip to Japan in “the late 70’s” with, you guessed it, Dave Checkley!  What a small world and what an easy way for us to break the ice when we’d finally meet. 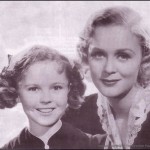 Now you’ve probably put two and two together, but though she might deny it, neither Ali nor I connected this “famous Gloria Stuart” with that nice old lady who had traveled with us in China.  But we had plenty to talk about, anyway, and were thrilled to be invited to her home to see her printing operation.  We were treated to see her art all around her as well, many of her own lithographs, her paintings (including renderings of the Watts Towers and kites, nearby), her books, and even her extraordinary garden.  Gloria had at least 20 mature rare Bonsai trees in her beautiful miniature plant world.

Finally, let’s make a final flash-forward to the most recent series of events with our friend Gloria.  (This is the embarrassing part.)  As one of the founding members of the Screen Actors’ Guild (SAG), Gloria is a popular speaker with actors, students, and the public.  It was in this role that she was invited to Seattle in the fall of 2002.   She would speak to SAG members, participate in kite making at the Foundation, and have time to visit the Foundation archives to help push her book forward.  Gloria would be accompanied on this trip by her artist-assistant Alwyn O’Mara and by Gloria’s daughter, Sylvia Thompson (whom we’d never met – or so we thought!).

Upon meeting in baggage claim it was “smiles and greetings” all around until I looked into the face of Sylvia, Gloria’s Daughter.  The flash of recognition was immediate and memories of 1988, and China, and my three Narita adventurers came flooding back.  Here is where I remembered Sylvia’s voice, in China, saying something about “mother was a Hollywood star.” There was recognition on Sylvia’s part, too.  As we were loading bags she kept repeating, “Mother where did you meet these people.”  (She had been out of town when we’d met Gloria in LA)  She knew she knew us!  I glanced at Ali as we jumped into the van and knew that she had “seen the light” as well.  We could hardly contain our shock, surprise, and embarrassment as we traveled on to martini hour and dinner.

After a quick aside, where Ali admitted that she, too had now connected all the dots, I told her that we had to “fess up”.  With a final gulp of liquid courage, I sat down and explained all.  Well, we all got a good laugh and it couldn’t have hurt anyone’s feelings, because the happy ending is right around the corner. 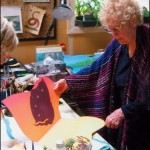 In early 2006, the Drachen Foundation honored Gloria at a reception held at Los Angeles’ Japanese American Community Cultural Center, where pages of her butterfly-kite book were unveiled to the public for the first time.  A labor of love, this book, shaped like a butterfly, has eight pages featuring kites.  Every page is an original work of art that includes lithography, collage, and hand-set print. Gloria’s life-long love affair with kites has come to life in this new book and Gloria graciously donated the kite pages to the Drachen Foundation where they will be prepared for a traveling exhibition of Gloria’s book- and kite-craft.  Gloria qualifies as a living archive and we’re happy to call her a friend of the Drachen Foundation.