I had a nearly complete piece written all filled with more things we can do to alter the future of our kite club. I am on something of a tear concerning the future of the AKA. I started with this club back when kite flying was mostly single-line and mostly a hobby practiced by older, retired folks. 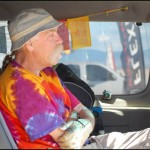 Those early sport kite flyers were loud-talking and lots more energetic. The kites were fast-moving and looked dangerous.  They’ll probably hurt someone. The differences were the topic of many conversations and nearly resulted in the division of kiting into two clubs. Luckily it never happened and we have survived to understand that the number of lines on a kite is not any sort of determination. We can include all in the game.

The weekend after Memorial Day, buggiers gathered once again at El Mirage Dry Lake to enjoy the relative quiet and peacefulness of the playa. Perhaps a dozen vehicles and 18 or so individuals meant it was intimate and friendly. Some have been attending the Thangs for years and some were making their first sojourn to Elmer’s, one of the altars of the buggy sport. The gift for me was to watch as newcomers and old-timers came together and bonded.  Focusing on the things we share in common rather than any differences. Brand of kite of buggy was never an issue. It scarcely matters how long one has been playing with kite traction.

I remembered when I began with organized kiting. How I was encouraged by everything I learned. Not just the specifics of the kites I played with then.  Eventually it led me into an incredible world of kiting and I have enjoyed every minute.

I remembered what was really important with kites. Pay attention to the weather and play with friends.

I don’t know what we learn from more surveys. Surveys seem to be opinion polls without any specific focus. I believe we could do with some solid leadership. Some one with a clear vision of what we as kiters can expect to accomplish and some ideas to motivate the membership.

Or turn it over to an administrator to take care of the details and get outand fly more kites.

If we want to have a solid, thriving kite club. We need to do the job. Enough waiting for some one to do the work so others can find fault. Enough of “wanting” and expecting it to somehow happen. If we want to live in that world. We need to be that person.

Ask not what the AKA can do for you. Ask rather what YOU can do for the AKA.  (with all due apologies, but damn, the words are true and carry immense power)

Like much of the other troubles I’ve started (name-tag swapping, best manufactured accessory, shot-car racing-to name but three), I’m not waiting for any administration to get on board.

I have plans. Along with a band of cohorts, we have idea on bringing more fun and play to the AKA convention fields. All the more reason to come and play with the gang.