This year the NABX excitement started off well before anyone left the comfort of their home. As the trash talk, dares, challenges, friendly tips, and reminders were flying across the NABX section of the ‘Power Kite forum’, a serious venue concern reared its ugly head.

In addition to the actual event that takes place on Ivanpah Dry Lake Bed in Primm, Nevada, there is a pre-event the previous weekend at two other dry lake beds in California. Traditionally the pre-event starts at El Mirage, affectionately known as Elmer’s, and then moves to Superior.

For many of us Superior is the highlight of the entire trip. There are usually 15 – 20 or so hearty souls who make the trek to Superior, which is a good 20+ miles from the closest town. The desert sky has more stars then you can possibly imagine, as well as sunsets and sunrises that are beyond description, and photos cannot possibly do them justice. Superior is one of those places in the vast USA that you go and not see any signs of civilization; there are no power lines, cell phone towers, not a single sign of man’s footprint. It is the same as when the settlers came across it hundreds of years ago.

So it really hit a nerve, a really raw nerve, when we found out shortly before we all left home that Fort Irwin, an active military base adjacent to Superior Dry Lake Bed, was going to be commandeering Superior, immediately. (Apparently it closely resembles the Middle East and is perfect for training soldiers-we won’t go there- this is a kiting article) 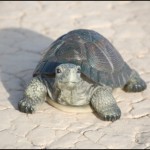 A compromise was reached and local activists were given a small amount of time to gather up and move the tortoises to a new habitat. This reprieve was also enough time for the NABX pre-event.

Most likely new pre-event plans will have to be formed for next year, and this initially seems sad…but we Americans are fortunate to have huge and magnificent geography within our national borders, with lots of dry lake beds. And who knows…we may even find a better place.

With all the excitement out of the way and the pre-event on track, life was good. So as to make a strong lasting memory, Aeolus, the god of wind, howled all weekend! I don’t think the winds ever dropped below 30+mph and frequently gusted much higher, several times gusting past 50mph.

Some stayed and toughed it out. Some left a little early. Some thought it was a gift and got tremendous air with their buggies.

While the NABX pre-event was occurring at Superior a Blokart event was happening at Ivanpah.

A Blokart is a way cool small land sailing apparatus with a fixed sail. Interestingly it also comes from the home of the kite buggy, New Zealand. It takes much less skill, almost no learning curve, and is inherently safer then a kite buggy (you can’t be pulled out of it).

The official Blokart event ended as NABX began, but many of the people stayed for both events. There is certainly enough room on Ivanpah for everyone.

Claxton Thompson, organizer of NABX did an outstanding job, as he has for the last 9 years. Without Claxton there would be no NABX. Claxton is the heart and soul of the event. Everyone else just gets in the way.

NABX had some races for the competitors, games for those who came to play, and camaraderie for the posers who came to hang with the like minded.

Buggiers came from all corners of the USA, all across Canada, England, Israel and one from Scotland. All in all there were about 160 of us that went to play in the desert this past spring, in one fashion or another. Some buggyed, some used Blokarts, some rode bicycles, and some even flew single line kites.

BLM (Bureau of Land Management), our land stewart, was a gracious and welcoming host. We thank them for their cooperation and understanding.

It always amazes me a little bit when all is said and done, how well NABX does work for most. After all, buggiers by nature are rebels, loners, anti establishment types. So when they are organized into a group and told they have to follow certain rules, it can get…interesting. Mad Max would be so proud.