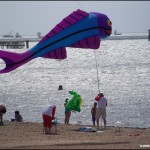 The fifth year of this event was just as much fun as all the past, with a little more excitement thrown in just to add to the mix.   In 2003 the Coastal Bend Skypirates kite group gathered here at the beach to fly kites and do demos for the kids and families of the Down Syndrome Association of San Antonio members, about 10 families were present.  The organizers ( the Ray Schockley family) asked us to add some color and fun for these very special children and we were glad to do it.  We even had some “Gayla” kites to give each youngster so they could join in the fun!! 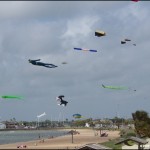 Over the years the event has grown in two ways, more families have attended and now the organizers feed about 350 people a lunch and dinner snack; and kitefliers have caught onto the joy in giving to others.   In 2004 the Skypirates reached out to other kite club members in south Texas and we had a few from SPIKE come and fly with us,  then the  following year we put the call out throughout the state’s clubs and made a summer event out of it. We soon had about 40 kitefliers grouped up on the beach all vying for better air space  and taking turns on the “front” Beach to show off how they can fly duals, power kites, quads,  stacks of Microns,  you name it. Last year we had Coastal Bend Skypirates and guests from the Cloud Chasers from Austin, SHARKS from Houston area, SPIKE members from the southern tip of Texas and a group from San Antonio that has now revived the TAKO kite club.  We had a guest flyer from eastern Texas come in and fly huge display kites at the front of the beach entrance—stopping traffic with all the kites aloft. 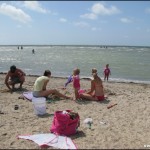 We always gather for a “happy hour”  and meet/greet on Friday nite, this year the  “locals” grilled up some brisket and sausage in some beer and BBQ sauce,  added the sides and we enjoyed meeting and making new friends until well after dark.   Sat AM most everyone got coffee and breakfast at our “kiters friendly” Spot (JJ’s Café),   then out to the field.  There was no waiting for wind as a week solid in the mid 20’s to mid 30’s had been the prevailing pattern.  The various flyers did have a good amount of smaller more controllable kites aloft in no time and the beach was decorated with the usual banners, feathers,  and groups of “fish” whipping in strong winds. 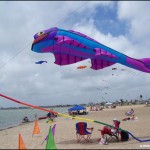 The Downs families soon overtook the entire beachfront and were enjoying themselves as they always do.  After a light lunch we settled in to an afternoon of visiting and flying various dual and quad kites as room permitted.  Then came the unexpected……   a squall line appeared at horizon line level and the alert went out.  What a scramble to get kites, tails, socks etc down and on the ground!!     Everyone pitched in, and all got caught in the stinging COLD rain that came screaming in from a near perfect, seemingly peaceful,   sky!!  It was all over and sunny again in a few short minutes, but alas one kite had pulled it’s moorings before it could be “wrangled” to the ground.  It took off and sustained some damages before it stopped traveling downwind, but was re-captured and wrapped up.

The sudden frigid rain sent most of the Downs families running for their hotels to get out of cold swim suits etc—only a few returned. Lots of damp kites and kitefliers, but soon the sun was back out, winds were steady and lighter, we re-launched some kites to dry them out and the short line quads were exercised by at least six fliers to wrap up the afternoon. 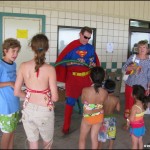 The joy seen in the eyes of these youngsters is just plain spirit lifting!!  One very young Downs child was hugging on Terry during our lunch break and of course the cameras were all out to capture the moment, Terry had a grin from ear to ear, and most of us watching were not dry-eyed!!  This is what this particular kite event is all about, not for the sake of the kite community, or for some proceeds of some sort, or a competition at all,   but purely for the joy of giving back some of what we are blessed with;  to some children and parents that struggle toward a “normal” life and are not so fortunate to be able to fly a stunt kite for example due to physical disabilities.   “Audrey’s Day at the Beach”  is now a 501C  charitable organization,  we will certainly look forward to next years event, please join us  if you get the opportunity.