The seaport of Wirral sits on the Wirral Peninsula is bounded by the River Mersey, The Irish Sea, and the River Dee. Ferries, Road Tunnels, and Rail Tunnels connect Wirral with the city of Liverpool.

On Thursday 5 June the kite flyers went, via a vintage double decker bus, to Birkenhead Park, thought to be one of the oldest public parks in the world. Birkenhead, the first civil public park in Britain, opened in 1847 was beautiful, serene, and regal.

After famed landscape architect Frederick Law Olmstead visited Birkenhead in 1850, he incorporated many of the features he observed there into his designs for New York City’s Central Park, and Buffalo, New York’s emerald necklace. (Buffalo’s emerald necklace is what the ring of connecting parks, designed by Olmstead, that surround Buffalo is called).

Our day at Birkenhead was a combination of Press fly, school programs, and a welcome lunch with the mayor. Some school kite programs had been completed in previous weeks and their kites were already displayed in the community center, located on park grounds. Several other classes joined us at the park that day and those students had a quick sampling of kite history, plus the opportunity to speak with, and fly with, the international kite guests.

Friday 6 June most of the international guests took the 20 minute ride from the Wirral to Liverpool for a day of sightseeing. Liverpool is a remarkable city; it has an abundance of culture, beautiful country side, stunning coastline, world class sport, and of course Liverpool gave the world the Beatles! This last point cannot be stressed enough.

Do you know what people from Liverpool are called? Liverpudlians!

Albert Dock was the first enclosed non-combustible dock warehouse system in the world, and the first structure in Britain to be built entirely of cast iron, brick and stone. In 1848 the worlds first hydraulic warehouse hoists were installed.

Saturday 7 June and Sunday 8 June the venue for the Wirral International Kite Festival was ‘The Dips’ at New Brighton. It was a superb flying field located on the waters edge with clean, uninterrupted wind. The large kite fields were perched between a wind farm planted in the water and train tracks upon the dike. Next to the tracks was a golf course and residential neighborhood which provided a constant stream of spectators for the kite festival. 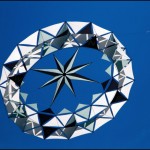 On Saturday evening there was a dinner and auction at the local cricket club. As we arrived at the club a cricket game was in progress. I immediately showed my ignorance when I said…”they look so nice in their uniforms with those creased pants and cable knit sweaters!” I was quickly, and in unison told…”THEY ARE CALLED WHITES NOT UNIFORMS!” They are very polite British people so they didn’t finish their statement…but I could swear I could read their minds…”they are called WHITES not uniforms you barbarian!” I believe I single handedly set the colonies back centuries!

By Sunday the previous day’s clouds had passed and it was a glorious kite flying day! The winds were divine, the sky was a lovely blue, and the faces all wore smiles. Then ‘SHE’ descended upon us! The ‘What If’ woman with her unanswerable ‘What If’ questions, the city’s Risk Control Officer!

Risk control had to work very hard to find anything to be concerned about, and it was such a great day, even a visit from the indomitable ‘what if department’ couldn’t dampen our collective spirits! Well, ok, the three German kite flyers she hassled weren’t as amused as the rest of us were, and even less so when we kept reminding them it was really about residual feelings from WWII! But we kite fliers are an easily amused lot, and when we aren’t doing our favorite activity, flying our kites, we love ribbing our friends!

It was a lovely festival in a wonderful location. It had all the right ingredients and was prepared and presented perfectly! Malcolm Goodman did a fantastic job, as usual, with the international kite flyers; Dave Holt handled the local logistics, and George Weber was a knowledgeable announcer with Chris from the council doing a great job gluing it all together.