We cannot direct the wind, but we can adjust the sails.
(John Barresi’s fortune cookie)

And thus, Wednesday morning dawned and it was Day 3 at the 2008 AKA Convention. Much like Tuesday, the weather started out really nice, a clear blue sky without a single cloud lurking anywhere on the horizon. Despite the large chunk of American history that “Gettysburg” is involved in, its a fairly small town area and our morning started off with what looked to be a simple trip to get some supplies. Thankfully, our GPS managed to get us back to the Eisenhower, with just enough time to catch a bit of the Make and take workshop. Also, the annual workshops on judging handmade kites began and Dave Gomberg led a fun workshop on handling large kites, both as an inside and outdoor, hands on workshop.

Also, today was the first day when the Auction recieving begins in earnest so, slowly but surely the area is filling up with all kinds of amazing kites and accessories people can bid on (even by proxy!). Marla Miller and staff were also getting ready for the big bag raffle push, little by little, Marla’s trademark signs imploring people to participate are popping up all over the complex and when I last looked, she was making plans to have an ATM moved right into the room to make your buying decisions just a little easier and convenient!

Upon arrival at the fields, we looked up and over our heads, there was an aerial rok battle in full swing with a custom set of Roks made by the Maryland Kite Society, depicting the Blue and the Grey side of the Battle of Gettysburg. This was the second day this has been and after two days of this, there is a tie, so tomorrow’s final battle will decide which side wins “this” version of the Battle. Spectators and kite flyers alike are allowed to compete, so, tomorrow morning, pick your favorite side and have a go at it, Rok battles are easy fun to take part in.

Much like yesterday’s winds, they were mostly light and frequently variable but, in the end, definitely flyable conditions for all classes, I’m reasonably sure that the wind rules didn’t really play much part in the overall scoring and and running of the days events. One new event that was run this year was Open Multiline Pairs late in the afternoon. About 2 years ago, myself and John Barresi began campaigning to have the event run at both local festivals and eventually on a National level. We managed to surpass the number of pairs spread out in different conferences and this year marks the first time the event has ever been run at a Grand Nationals! Congratulations to all the quad fluers who participated and made this happen. and a special great big thank you for the pairs that have qualified and competed today, and on Friday when the ballet runs.

Below are the results from today’s competitions and as always, the top 3 are randomly placed in the results and will be announced at the banquet on Saturday evening. 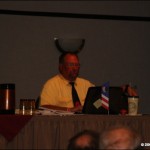 Wednesday evening has it’s very own special event, the BUSINESS MEETING for the general membership. I’ve now made two of these for the entire meeting but my utter exhaustion made it impossible for me to keep my eyes open for long (that and my long standing allergy to meetings in general) so, I sent my new cub reporter John Barresi down to keep tabs on who got the vote to be the AKA’s President for the coming year. I’ll post the exact numbers tomorrow as my “ace” reporter didn’t get the exact numbers but, Gary Engvall will remain President for the next year, coming in with 500+ votes, while Cliff Quinn capturing 300+ votes. Tomorrow’s weather and Friday’s look to be up in the air with a 50% chance of rain much of tomorrow and a better (ie, more) percentage for rain on Friday as well so, we may see some events shuffle around tomorrow as thursday is typically treated as a “makeup” day for events. You’ll have to check back tomorrow and see what happened…