Convention: Convention was great. We had plenty of room. We had good wind when we had wind. The building would have been an effective wind block to the east, but the wind never came from that direction. It blew out of the north and northeast the whole time we were there. The two sound fields for Sport Kite were both 350 feet on a side. The folks from Boyds came out and mowed them for us on Monday morning. Fighter Kite folks had their own field. We had seven fields up and running for the Convention. 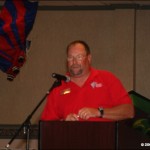 Election:Election Committee Chair Al Sparling reported that there were 966 ballots received. 29 ballots were invalid because the label was removed or blotted out. 3 ballots were spoiled because there was no way to determine who the person intended to vote for. That leaves 934 valid ballots. The ballots are counted by the Election Committee, at Convention. Each candidate is allowed to have people in the room for counting. They start at about noon on Monday of the Convention and they get done when they get done. They were done about 2:30 PM. Gary Engvall was elected AKA President with 518 votes. Cliff Quinn got 394 votes.

The election results are reported at the Wednesday night Annual Business Meeting (ABM). All AKA Members are encouraged to attend this meeting. It is at the ABM that major decisions about the future of the AKA are voted on by the AKA Membership. Just an interesting perspective on this: About 10% of AKA Members attend any given Convention. About 10% of those who go to Convention go to the Annual Business meeting. From that perspective, under the current system, major decisions for the AKA are being made by 1% of the Membership.

Controversy: Some of the rumors that must have come from the Annual Business Meeting must be really good. It was a tussle. Two different people at two different times asked me to resign as President. They respectfully asked. I respectfully declined. I gave a slate of officers. It was voted down by the AKA Members in the room. We quickly tried to come up with a slate that would appease the naysayers. That one got through. It is: Richard Dermer, Vice President. Deb Lenzen is Second Vice President. Jon Burkhardt is Treasurer, Sherri Pigeon is Secretary. Directors at Large are Sam Poikail, Angie Chau, and Jim Cosca.

Positive note: Convention ended on a positive note. The Members of the AKA, and the AKA Members who attend Convention, all bring something to the party. Everyone’s contribution and skill set are unique, yet it all combines in a perfect symphony of kite flying and camaraderie. A lot of people work very hard to put on Convention and heartfelt thanks goes to out to all of them.

Next Kiting Deadline is October 15. Send the Kiting Editor your Convention pictures and reflections!