As director of one of the largest collections of kites in the world, I often get inquiries as to what we collect or should be collecting in the world of kites.  What is the importance or value of an individual item or a collection of items? Whose job is it to determine what is worthy of collecting and having in our closets?   Establishing value of an object, whether it is a kite or artifact, perhaps has only one rule, “to take into consideration everything.” 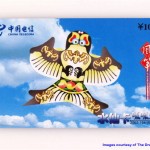 A good example of our discussion is that of international telephone cards with kite images.  The generic telephone card was developed for use of public access phones, was created to help those who did not want or could not afford a permanent phone in their own home or for use of one in a public area.  Phones (for pay) were established in various parts of a city.  To use them, one must put either the right amount of change, or a plastic card made to accept “downloaded” amount of money, and activated in the public telephones in order to make a call.  The cards were easy to obtain from a local store.  You could purchase the amount to put on the card, thus allowing an individual to decide how much of their cash was allotted for calls. When the card was used to pay for calls, the right amount of money was subtracted as a call was made.   You never had to worry about having the right amount of change.  These cards are easy to produce in numbers and at low costs.  Many third world countries found the system useful as this made telephone access affordable for their populations.  The popularity of the cards grew in number.   The market for these cards and their system of allowing even the smallest of incomes to afford making a telephone call, it was the perfect solution to both domestic and international calling.  The telephone cards soon became graphic in their designs, and pleasing to have, even served a purpose of “advertising” a message, whether it be for the government or a commercial product.   Like stamps in many countries, the thought was to make the cards more appealing, boosted sales and more people purchased them.  It seemed to be the case for the foreigner; they became an inexpensive, clever tourist souvenir. 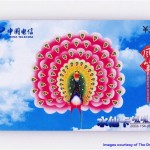 I am not sure when the first kite image appeared on the front of a calling card, but I can remember Scott Skinner coming back from Japan with a pocket full of telephone cards, all with beautiful designs of Japanese kites.  Moving throughout Asia, the images of kites on these cards seemed to be more plentiful, and countries like Malaysia, Indonesia and the Philippines produced images of kites.  It wasn’t until the last ten years that the country of China went into phone card kite design production with a vengeance.  It is these cards that we display with this article to give you an example of the collectability of these telephone cards as many were issued in a series within a short period of time.

And what drives this value of this item?  Many things, first, there are only one time production runs.  The telephone cards seem to never be reproduced once a batch is made and distributed.  Second, the number of the cards produced in a printing.

Some countries only create a few thousand, relating to a special event, like the Kite Festival of Dieppe, France.  The cards were available for the festival, and shortly disappeared afterward.  Third, the demand, if the card is popular, they are consumed within a very short period of time.  Fourth and foremost, the changing technology.  Sadly, public phones are disappearing and deteriorating in their locations.  Most of the world can afford their own cell phones so finding a working public phone is almost impossibility.  In 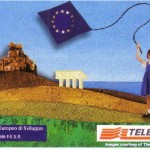 Italy, they are broken and deserted.  I tried to find a “tabachi” (tobacco) shop where the cards were sold, but many were not carrying them any more, as they aren’t able to sell them.  Once I did find a card, I could not find a public payphone that was working to use them.  The telephone card can only become that of a collector’s item, once popular by usage, now becoming only something of collector’s piece.

At Drachen, we have collected a few cards to illustrate their “kite” existence.  At the time of putting them into our database, I never thought them as “extinct” artifacts, as there always seemed to be a demand for them.  But time has proven me wrong.  There is a reason to collect and preserve, even telephone cards.

The wind is calling,